Twitter goes wild over Grammy Award-winning rapper's costume; "Not my idea of a stereotype of anybody," he responds.

By LAUREN IZSO
Macklemore
(photo credit: TWITTER)
Advertisement
Is wearing a fake beard and prosthetic nose offensive? The artists behind a few of this year's biggest party anthems including Thrift Shop, Same Love and Can't Hold Us have been the subject of Jewish controversy after the duo's rapper Macklemore appeared to be dressed up as a stereotypical Jew during a Friday performance, which was captured in a six-second YouTube clip. 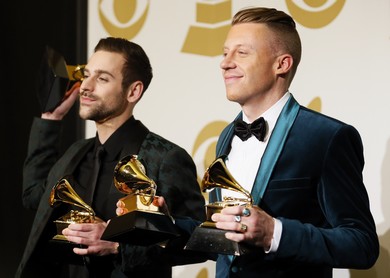 After the surprise concert at the launch of a new exhibit focusing on music video culture at Seattle's EMP Museum, social media exploded with accusations of anti-Semitism for the Grammy Award winner, including from some celebrities including Seth Rogen.

Upon realizing how offended viewers were from his so-called stereotypical Jewish attire, Macklemore defended himself on Twitter Monday morning, saying that was not at all what he had in mind.

A fake witches nose, wig, and beard = random costume. Not my idea of a stereotype of anybody.

The exhibit which is called Spectacle: The Music Video, is displaying the jacket worn by Macklemore in the music video for their hit song, Thrift Shop, so attendees of the launch were ecstatic to learn they would be seeing Macklemore and Ryan Lewis perform live. However, they may not have been expecting the spectacle brought on by Macklemore's choice of attire. A few Tweeters took the humorous approach to reacting to Macklemore's spectacle of a performance, saying his choice of disguise would only damage his own career.

.@macklemore bruh you just Yamakanned your own career.

Some took it quite seriously.

Check out @macklemore performing “Thrift Shop” as a stereotypical Jewish man. So much for same love, eh? pic.twitter.com/yZ19QmxIV0

for those who don't know, @macklemore performed Thrift Shop dressed as a racist Jewish stereotype. idiot.

Others blatantly stated just how strange they felt about it.

this @macklemore jewish controversy is really... weird. like... weird. hope it dies out.