Trend spotting: The looks of a year to come

No need to gaze into a crystal ball, just watch the New York Fashion Week runways to find out what you will be wearing next Fall and Winter.

By KATHRYN RUBIN
Fashion week 311
(photo credit: Associated Press)
Advertisement
Seven days, 89 designers, hundreds of models and countless designs – it's the Fall/Winter 2011 New York Fashion week. What began only a week ago, as one of the most anticipated fashion events of the year, is quickly coming to an end. When we look back on the week, most of it is a blur – an array of fabulous over top designs has merged together in our mind. While we may not recall exactly which ensemble belongs to who, what we will remember are the emerging trends – an overall "theme" that found its way onto several of the different runaways. RELATED:
The looks of New York Fashion WeekSo, with NY Fashion Week raping up in today (before heading off to London town this weekend) it’s time to look back on some of the biggest trends for Fall/Winter 2011: Lacy Lace 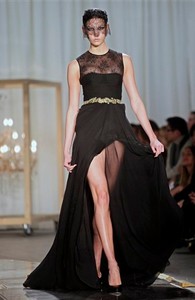 Jason WuThe lace trend, which emerged in full force for spring/summer 2011 collection, will continue to spread like wildfire into the fall/winter of the year. From runway to runway, it was almost impossible to find a collection that did not have some lace influence to it. While most designers went with traditional black lace, the Rodarte collection (by Kate and Laura Mulleavy) saw a few pieces incorporating cream and neutral colored lace. Over on Marc Jacob’s runaway, inserts of lace added a ladylike quality to the popular designer’s collection, described as “as mad mix of futuristic forties”; while at Betsey Johnson’s color spectacular show, she paired corsets and lace with punk biker jackets. However, nowhere was this emerging trend more apparent than at Jason’s Wu show, where the young designer apparently used 15 different kinds of lace to create an array of stylish (baroque inspired) silhouettes with lace sleeves, skirts with lace panel overlays, gold lace gowns, and even mini lace veil masks covering half the face of some of his models (right). Somewhere over the rainbow 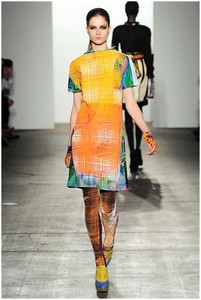 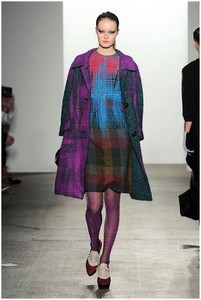 LibertineFall/Winter collections are rarely known for their colors, which often stay close the black, gray, mossy green, murky purple and somber blue side of the color spectrum scale. While many designers stayed close to this familiar territory, others, such as Jill Stuart and Costello Tagliapietra weren’t afraid to splash their collections with a little color. However, it was the Libertine line that really dared to take advantage of the full color spectrum. Despite a recent split from co-founder Cindy Greene and general absence from the industry, designer Jonathan Hartig's newest line succeeded in banishing any doubts about Libertine's success at the NY Fashion Week. Hartig's dramatic use of bold tones and bright hues put a modern spin on his 1960s inspired line (above). 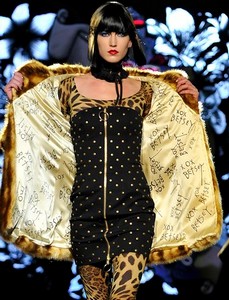 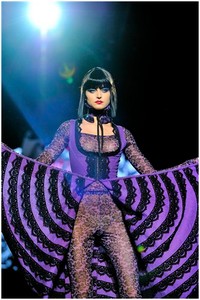 Betsey JohnsonOf course it was queen of eccentric style, Betsey Johnson, whose collection really dared to play with different bold tones and vibrant patterns. While the show began on a more somber note, with models wearing rather subdued prints of black and gray, it did not take long for her infamous bold and bright hues to cascade in. From cheerful prints, to flowery hippy dresses and wild animal prints, Betsey's notorious whacky style ruled the runway (above). 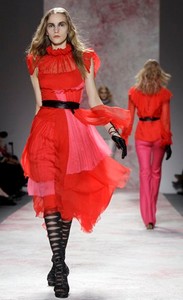 Betsey JohnsonAmongst the new found color palette, one fiery hue ruled above the rest – luscious red. Whether it was burgundy, ruby, plum, rose or fire engine red, chances are you saw it incorporated in one or more of your favorite collections. Prabal Gurung (right)  and Costello Tagliapietra reminded us how nothing quite makes a statement like a bold red dress. Even Carolina Herrera, who generally steers clear of the trend du jour, partook in this trend, with a collection filled with deep cranberry and rose tones. The winter chill factorFreezing temperatures and mountains of snow must have been on the designer’s mind this week, as outwear took the center stage. Traditionally, winter jackets and overcoats are almost neglected on the runaway - often considered simply a "bulky" cover that hides the real fashion beneath.  However this week, this easily once dismissed garment took center stage with many designers playing with this one neglected piece in creative  ways. Another arctic temperature inspired trend that popped up on the runways was fur trims. From coats, to sweaters, to gloves and shoes, a fur trim "something" was present in almost everyone's collection. Over at Vera Wang's show fur trimmed satin parkas graced the catwalks (below, right), at Oscar de la Renta's fox-fur trimmed coats (below, left) ruled the show and Caroline Herrera decorated her elegant dresses with a fur-trim. 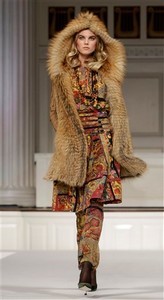 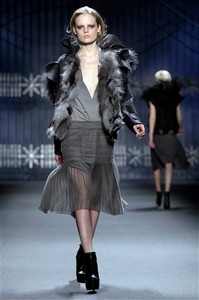 Vera Wang How the west was worn Western inspired pieces have bobbed in and out of style for years, and it looks like that they may be back "in" again this coming Fall. Diane Von Furstenberg mixed things up, ditching her classic wrap dress in favour for the style of Old West. The New York City favourite designer showed us how the west was worn in her newest collection, title “American Legends”. The look was bold and colourful, with vibrant hues of red, blue, and green featured throughout the show. Infusing her classic prints with a definite western influence, Von Furstenberg broke out some wide-brim hats, a bit of fringe, poncho jackets, elegant gaucho pants and knee-high boots.
That 70s Show 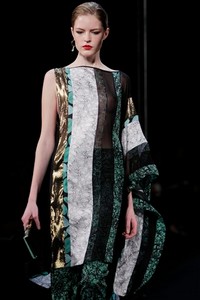 DVFThe style of 1970s has made a roaring comeback for the coming spring/summer and it seems that this once forgotten fashion of this decade is here to stay. Marc Jacob picked up where his spring/summer left off, as the designer continued to incorporate retro prints as well as mustard yellows, dark oranges, bottle greens and camel into his new line. While 70s boho chic will continue to be an integral part of the fall/winter collections, it was the disco glam style of this decade that truly ruled the catwalks. Over at Michal Kors' show, the famous designer draped his models in disco jersey gowns adorned with crystals. While Diane von Frustenburg grabbed her audiences attention with Studio 54 inspired ensembles in her “American Legends” collection – the most eye catching pieces were floor length dresses made completely from sequins.