Self-confessed ladies man Dor Lupo explains why Tel Aviv neighborhood bar Ze Pequeno is the perfect place to get acquainted with the locals.

By YONI COHEN
Dor Lupo barman 311
(photo credit: Yoni Cohen)
Advertisement
Self-confessed ladies man Dor Lupo has worked as a bartender for nearly three years, and has been polishing his skills at Tel Aviv neighborhood bar Ze Pequeno for the past year. The 26-year-old, who is originally from a small town near Kfar Saba, spends his nights partying hard and serving cocktails to the prettiest girls in Tel Aviv. By day he is a serious economics student looking to the future. Lupo says that you can’t learn to be a bartender by doing a course. For him, it's important to be relaxed and let everything come naturally. “If it doesn’t come easy then maybe it isn’t for you,” he says with a cheeky smile. He took some time out from charming the local ladies to answer a few questions about his “dream” profession. 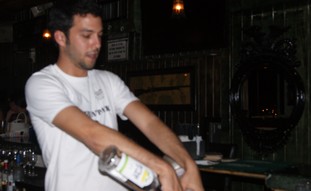 Photo: Yoni CohenHow did you get into bartending?I started working at weddings, but there you don’t really need to know the alcohol - you just pour it. Then I started working at a music bar, where I learnt to be a real bartender.What is the craziest night you have ever had when working behind the bar?
Every night when you go out with a girl that you met at the bar it's pretty crazy. When parties end at seven in the morning it can also get crazy. Sometimes I feel like I've been hit by a tsunami. So even though you're working its still fun?Yes. You drink so much that you don’t even realize the time passing and you just enjoy yourself. If you can’t drink then I don’t think you can be a bartender.Who is the most interesting person that you have ever served?Girls in general – they really interest me.
Also, if you have enough alcohol then everyone is interesting on some level. 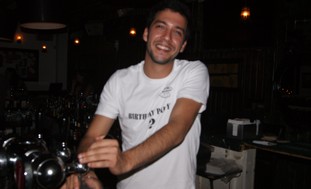 Photo: Yoni CohenWhat is your favorite drink to serve?I don’t really have a favorite. But if there's a nice girl to serve it to then does that make serving the drink more enjoyable?Of course. You will serve it with a bigger smile and even maybe ask for a phone number.Would you say that you treat girls who come to this bar better than guys? No. If they are really cool guys then they're OK – I will still be nice to them!On that note, how many people hit on you in a night?If a girl wants me then she will give subtle signals but in general only about one girl a week. They usually just leave a napkin with their number. 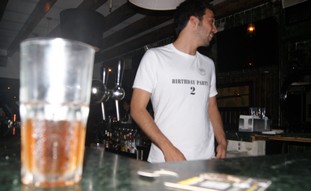 Photo: Yoni CohenWhat is the best part about the job?You are living in a party. Everyone is in a good mood all the time. My work involves alcohol, dancing and girls. What could be better? So even though you are going to work you are in fact going to a party?Yes! That is why when I have a night off I don’t go out – I want to relax.Will you miss your bartending days?Yes., I've had the time of my life. And I'm doing it in Tel Aviv – the best place to be a bartender! Would you want to be a bartender anywhere else in the world?No. Tel Aviv is the place to be. I love the Israeli girls too much – I just couldn’t leave them behind. Ze Pequeno, 128 Ben Yehuda, Tel Aviv. Open 9 p.m. till the last person leaves.From age 23 and above.Telephone: 054 222 6950