A string of success

Grammy winning violinist Miri Ben-Ari tells about her explosive musical career and meeting the US president.

By RONIT MATHIAS
Ben-Ari
(photo credit: Courtesy)
Advertisement
Miri Ben-Ari, a Grammy-winning violinist, originally from Israel, has created her own unique sound – a revolutionary fusion of classical style and jazz, R&B and hip hop. She is recognized as a musical pioneer. A classically trained violinist who once studied under the legendary Isaac Stern, Ben-Ari has helped sell millions of records by collaborating with other Grammy-winning artists such as Kanye West, Jay Z, Wyclef Jean, Alicia Keys, Wynton Marsalis, Britney Spears, Maroon 5, Patti Labelle, Brandy, Donna Summer, Janet Jackson and John Legend. She is also known as “The Hip Hop Violinist,” the title of her latest album on Universal Records.Known for her captivating show-stoppers, Ben-Ari has wowed audiences around the world with performances such as Aventura’s “Sold Out at Madison Square Garden” concert, VH1’s “Save the Music” gala at Lincoln Center, “Fashion Rocks” at Radio City Music Hall, Sesame Street, Senator Hillary Rodham Clinton’s campaign, Viacom’s “Dream Concert” at Radio City Music Hall and the Martin Luther King Jr. National Memorial dedication in Washington, DC. She was recently invited by media icon Yue-Sai Kan to perform at the Miss Universe China Pageant in Beijing, a live broadcast to millions of people.Ben-Ari has also been the face of promotional campaigns for companies such as Reeboks, Vodafone, Pepsi and Coca-Cola. 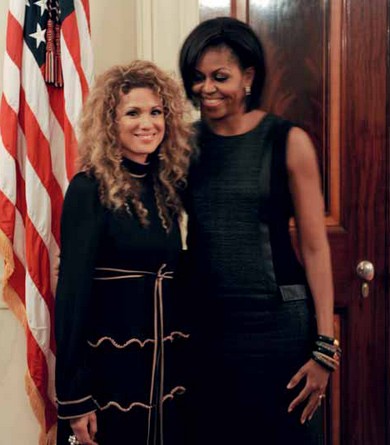 Ben-Ari and Michelle Obama (Courtesy)As a young role model, Ben-Ari has been received many international accolades. She was honored as an Apollo Legend by the Apollo Theater in New York City; she won the International Jewish Woman To Watch of 2007 Award; the 2008 Israel Film Festival Visionary Award; the American Society for Yad Vashem Award; the Young & Powerful for Obama 2011 Rising Star Award; the Martin Luther King Award from Israeli President Shimon Peres; and the 2012 Big Vision Award.Her single “Symphony of Brotherhood,” featuring the “I Have a Dream” speech by Dr. Martin Luther King Jr., was the first instrumental single ever to hit Billboard’s R&B/Hip Hop charts, MTV and VH1.She was recently appointed Goodwill Ambassador of Music at the United Nations Association-Brazil. Describe a typical day in your life.There is no such a thing as a ‘typical day’ in my life. My shows and events are so different from each other. I do try to maintain a daily routine with physical activity and a healthy diet. I start my day with a cup of mocha latte.What is the most important thing in your life? To be happy.

When did the idea come to you to combine the violin and pop music? My first tour in the US was with an orchestra backing R&B legend Luther Vandross. We performed in every major amphitheater in the US. I watched him from the strings section every night and thought to myself how perfect he sounded and how much fun it must be to perform for all these people.I was playing jazz at the time and felt that there must be a way of playing the violin where the violin becomes the leading voice instead of just being a part of the orchestra.What is the inspiration for your music? Whatever moves me and touches my soul -- stories, movies, good music and good people.What are you most excited about in your job? I love creating the possibility of using my instrument as a voice to carry a message bigger than myself. For example, in my song “Symphony of Brotherhood” I feature Dr. Martin Luther King Jr. with the timeless “I Have a Dream” speech, where my music is the soundtrack to his message and legacy.I feel humbled and a little nervous every time I get to perform this piece. It’s like I have the responsibility to promote such a big message. I was privileged to perform this song at some very important events: at the White House for the First Lady Michael Obama; at the Martin Luther King Jr. Memorial dedication in Washington, DC; and this year for President Barack Obama.Because of the fact that my family survived the Holocaust, I support the fight against racism with my music and also with my nonprofit organization Gedenk.What is the most memorable thing that has happened in your work? I cannot single out one particular event, there are so many of them. To name a few: working with so many incredible artists such as Kanye West and Jay Z; winning a Grammy; performing at the White House; performing for and meeting President Obama; and speaking at the UN.What was it like to be invited to the White House? 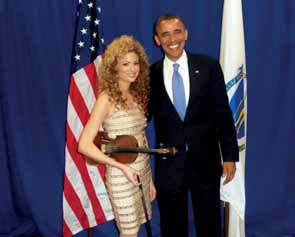 Ben-Ari with US President Obama (Courtesy)
In 2011 I was invited by First Lady Michelle Obama to the White House for a special performance and to be honored as a ‘Remarkable Woman.’ In 2012 I was invited to perform for President Obama.What kind of volunteer work do you do? I love to give back to the community. I support various charitable organizations such as UNICEF, FIBA (Fellowship of Israel and Black America), Phoenix House, NRB Convention and Aglow, the Jewish Federation, Russell Simmons’s philanthropic arts foundation and the Emery Awards. I am the founder and chairman of Gedenk (“Remember” in Yiddish), a not-for-profit organization dedicated to promoting awareness and education among youth about the Holocaust.

What or who are your style icons or muses? I respect and love many designers and artists, but I don’t have ‘style icons.’ What is your personal style? Fresh, classy with a smile. My personal style changes as I evolve as an artist and a person.I love to create new sounds and concepts.In my new song and video “Dim the Lights,” I created a “new Miri,” who is very stylish, fashionable and fun. I used a subtle sense of humor and the phrase “Dim the lights” to eliminate awkward and funny situations that I find myself in. I play a long ‘solo’ in the middle of this song. You don’t hear long instrumental solos in commercial music anymore, and I wasn’t afraid to break that format. This is me.In your personal life, do you prefer a natural look or a glamorous one? I like both. I grew up in Israel wearing jeans and T-shirts most of my childhood. Throughout my career I got very involved with the fashion world, working with amazing stylists and designers such as Zac Posen and even performed at Miss Universe. I believe that style and fashion can transform an artist.

What is your secret for maintaining your look? Physical activity and a healthy diet. There’s no secret. We all know what we gotta do. The challenge is to have the willpower to do so.What are the things you never travel without? My violin.

How do feel about the social media? The Internet has changed all of us. It has made the world smaller, where everyone can reach everyone. I love to read the comments on my Facebook page and Twitter. I recently had a very successful live Q&A campaign with formspring.com, where fans asked me questions during a live session about my music and life. It was so much fun!

What else do you want to achieve? Doing more things that are outside the box and being involved in more projects and campaigns to make the world a better place.Follow @JPost_Lifestyle