Felice Friedson has been at the forefront of creative media and communication for two decades. A Communications major, Felice created a decade-long, nationally-syndicated radio program that brought her in contact with reporting from the Middle East. A seasoned television, print and radio journalist, Felice prides herself in presenting her story in context -- whether reporting from Jerusalem, Sana’a or Ramallah.

In 2000, Felice developed the concept for The Media Line Ltd., an American news agency specializing in coverage of the Middle East which became one of the most prolific content providers to the region and around the world. Under Felice’s direction, The Media Line has become a primary source of reliable news and information to both the public and private sectors.

Capitalizing on The Media Line’s reputation for credibility and complete reporting, in 2005 Felice established The Mideast Press Club, which has brought more than 200 Israeli and Palestinian journalists together as professionals. In 2010, Felice foresaw the need for an initiative to support and empower women in Mideast media – an effort that became enormously important with the onset of the “Arab Spring.”

Recognizing her role in creating an agency of unsurpassed credibility in one of the world’s most volatile and untrusting regions, Felice was honored to be named a delegate to the 2009 Global Creative Leadership Conference in New York.  She has been twice nominated for the Charles Bronfman Prize – notably pursuant to a nomination submitted jointly by both Israeli and Palestinian journalists; and is a 2010 recipient of the Global Citizen Award from Orphans International.Email Felice at felice@themedialine.org

How Noble Energy came to Israel and transformed the Middle East 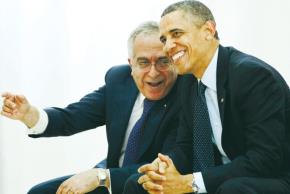 The Fayyad affair: A symptom of a diplomatic disease

The race to the White House: The Mideast view

Israel needs a nuanced approach to Hamas in the West Bank

Seeing success and having hope

Are we hearing Iranian voices?

Building boom in Jewish West Bank brings joy to none

The journalist with nine lives