Maze cartoon of Lions, Tigers and Bears, OH MY! 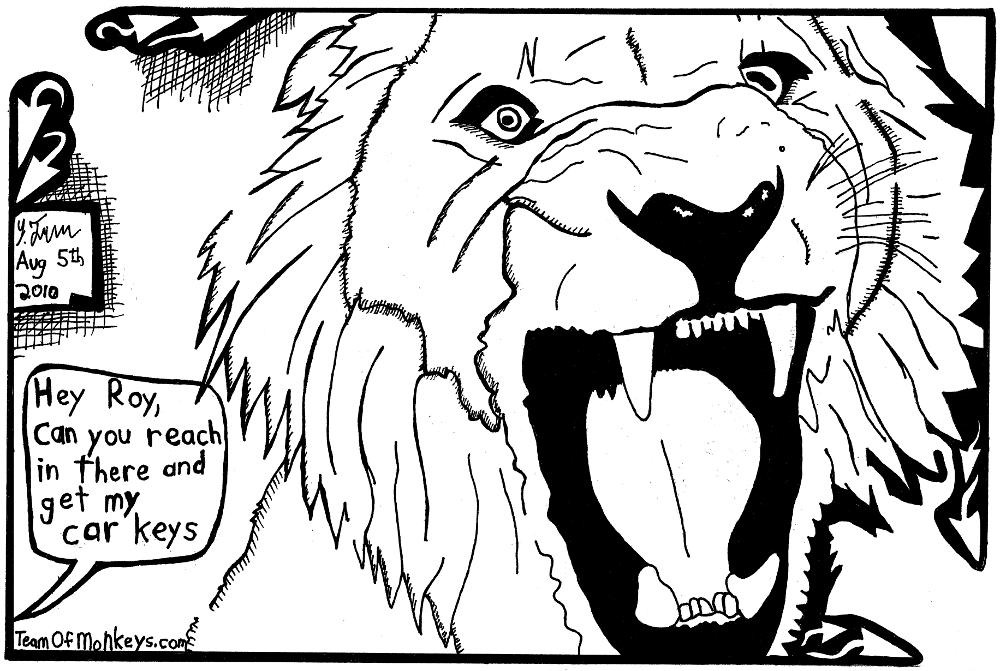 Yonatan Frimer lion maze cartoon
By Yonatan FrimerClick here for a printable, hi-res version of this maze
Click here for the maze solution of Tiger roar, lion roar
More on this maze cartoon''s topic
Roy''s tiger injuryOn October 3, 2003, during a show at The Mirage, Roy Horn was bitten on the neck by a seven-year-old male tiger named Montecore. Crew members separated Horn from the tiger and rushed him to the only Level I trauma center in Nevada, University Medical Center. Horn was critically injured and sustained severe blood loss. While being taken to the hospital, Horn said, according to sources, "Don''t shoot the cat!"
Horn was in critical condition for several weeks thereafter, and was said to have suffered a stroke and partial paralysis. Doctors removed one-quarter of his skull to relieve the pressure of his swelling brain during an operation known as a decompressive craniectomy. The portion of skull was placed in a pouch in Horn''s abdomen in the hope of replacing it later. Horn was eventually transferred to UCLA Medical Center in Los Angeles, California for long-term recovery and rehabilitation.
As of 2006, Horn was walking, assisted only by Fischbacher, and talking. To host Pat O''Brien on the television news program The Insider, he complained about his daily rehabilitation, "They are slave drivers over there. You''d think they are the KGB from Russia."
It is disputed whether or not the tiger intentionally attacked Horn. Montecore had been trained by Horn since he was a cub; he had performed with the act for six years. Fischbacher, appearing on the Larry King interview program, said Horn fell during the act and Montecore was attempting to drag him to safety, as a mother tigress would pull one of her cubs by the neck. Fischbacher said Montecore had no way of knowing that Horn, unlike a tiger cub, did not have fur and thick skin covering his neck and that his neck was vulnerable to injury. Fischbacher said if Montecore had wanted to injure Horn, the tiger would have snapped his neck and shaken him back and forth.
Former Mirage owner Steve Wynn (who hired the duo in 1990) told Las Vegas television station KLAS-TV the events were substantiated as described by Fischbacher. According to Wynn, there was a woman with a "big hairdo" in the front row who, he says, "fascinated and distracted" Montecore. The woman reached out to attempt to pet the animal, and Horn jumped between the woman and the tiger.
According to Wynn, Horn said, "Release, release," attempting to persuade Montecore to let go of his arm, and eventually striking the tiger with his microphone. Horn tripped over the cat''s paw and fell on his back; stagehands then rushed out and jumped on the cat. It was only then, said Wynn, that the confused tiger leaned over Roy and attempted to carry Horn off the stage to safety. Wynn said that although the tiger''s teeth inflicted puncture wounds that caused Horn to lose blood, there was no damage to his neck. Stagehands then sprayed Roy and Montecore with a fire extinguisher to separate the two.
A white tiger in the Mirage habitat.
Montecore was put into quarantine for ten days in order to ensure he was not rabid, and was then returned to his habitat at The Mirage. While Horn has requested that Montecore not be harmed, the incident may augur the end of exotic animal shows in which there are no barriers between tigers and audience members. Some animal rights activists, many of whom oppose the use of wild animals in live entertainment, sought to use the incident as a springboard for publicity, though few have ever accused the Siegfried & Roy show of mistreating animals.
The injury to Roy Horn prompted The Mirage to close the show indefinitely and to lay off 267 cast and crew members with one week''s severance pay. While Fischbacher has said "the show will go on", a hotel spokesman told the production staff that they "should explore other career opportunities."
According to the Las Vegas Advisor, The Mirage will suffer financially, not just from the loss of $50+ million in annual ticket sales, but from having to forgo untold millions in sales of food, beverages, hotel rooms and the casino''s gambling winnings. An MGM Mirage spokesman said losing Siegfried & Roy is a bigger hit to the Mirage brand than to its finances, because the entertainers are "practically the faces" of the hotel, and finding a new hotel brand or identity will be difficult.
In February 2009, the duo staged a "final" appearance with Montecore as a benefit for The Lou Ruvo Brain Institute. This performance was recorded for broadcast on ABC television''s 20/20 program.  The 10-minute program featured one of Siegfried & Roy''s signature illusions, in which Siegfried and Montecore (now 12 years old) magically switched places from within separate, locked transparent enclosures.
On April 23, 2010, the duo officially said farewell to show business. “The last time we closed, we didn’t have a lot of warning,” said longtime manager Bernie Yuman. “This is farewell. This is the dot at the end of the sentence.”
Click here to read the full article
Advertisement
Subscribe for our daily newsletter