The Israeli Border Police said that there was no way to know the gun was fake and they didn't know until after the man was dead.

The Border Police on Wednesday shot and killed a masked Palestinian in Shuafat, who had aimed a realistic-looking dummy gun at them, as he fled.

A video showing some of the chaos surrounding police and IDF forces preparing to demolish the house of terrorist Udai Tamimi in Shuafat, shows several moments in the back and forth between the sides.

At one point in the video, the now-deceased Palestinian is seen aiming his "gun" at Israeli forces and then lowering it when a large car passes by in between the sides.

Then at another point, the Palestinian is seen again aiming his "gun" at Israeli forces.

While one cannot see the actions of the Israeli forces in the video, at a certain point, the Palestinian turns around and starts running away. 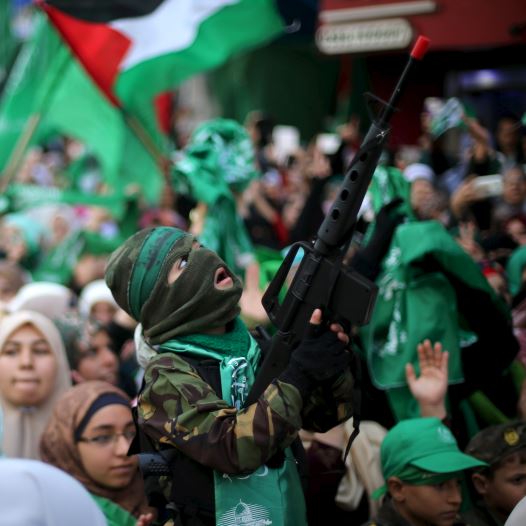 A masked Palestinian boy holds a toy gun as he takes part in a rally marking the 28th anniversary of Hamas' founding (credit: REUTERS)

After a few seconds of running, he also tosses away the "gun." A few seconds later in the video, he falls down dead.

Police say they didn't know the gun was fake

From the limited vantage point of the video, it is possible that: 1) he was shot at only after he dropped the dummy gun and fled; 2) while holding the gun he aimed at police but then managed to toss the gun and run another 30-40 feet before collapsing; or that 3) the police started shooting at him while he held the gun but may have only hit him after he was fleeing. The police said he was hit while still aiming the gun at them.

Rules of engagement in such situations do provide for firing at the legs of such a person who has presented a threat in order to prevent their escape and arrest them.

An initial response response from the police did not address the issue of the Palestinian dropping his weapon and fleeing, but did highlight that he had shown all of the open signs of presenting a threat.

The IDF declined to comment, saying that even though there were soldiers in the area, the incident had been managed by the border police.

The police would have been in charge given that the incident was taking place in east Jerusalem as opposed to the West Bank, where the IDF has primacy.

Tamimi was killed in mid-October when he was shot dead in a failed shooting attack at the entrance to Ma’aleh Adumim, south of the Israeli capital.

He arrived at the entrance to the West Bank city and opened fire at nearby security personnel. According to United Hatzalah volunteer EMT Akiva Skolnick, the terrorist was killed by returning fire from the guards. A grenade and knife were found on his person.

"Two highly experienced security guards that were at the checkpoint at the city entrance neutralized the terrorist immediately, with bravery and a lot of resourcefulness and without fear."

The shooter was responsible for the killing of 18-year-old Military Police officer Noa Lazar on October 8 when he opened fire at a checkpoint near the Jerusalem neighborhood of Shuafat. A 30-year-old security guard remains in intensive care, sedated and on a ventilator. A third person, a soldier, was also injured.