Bus strike cancelled as Smotrich promises funds will be transferred 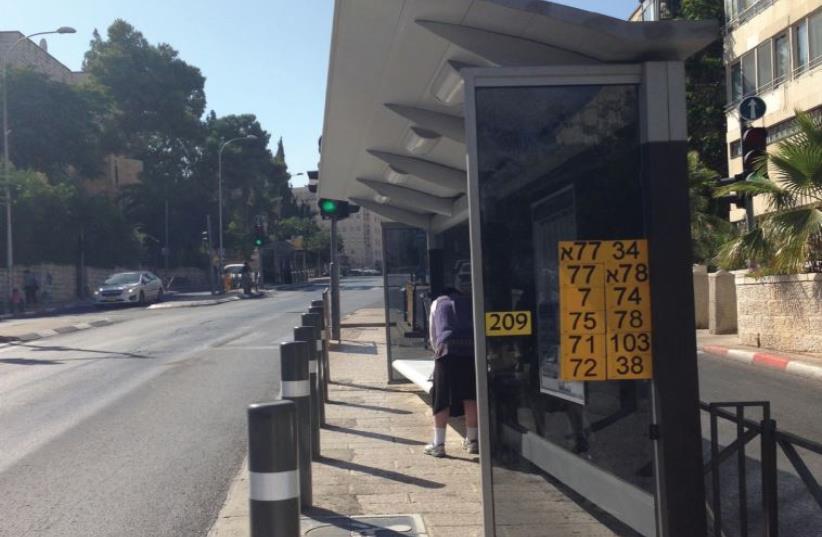 Barriers at a bus stop on Keren Hayesod Street
(photo credit: ERICA SCHACHNE)
Advertisement
A bus strike by the Kaviim bus company was cancelled after Transportation Minister Bezalel Smotrich promised that the funds that had not been transferred to public transportation companies would be transferred and requested that the companies continue to operate public transport."In light of our great appreciation of the minister's actions and honest efforts to provide regular public transportation service to citizens of the state, and in light of the minister's promise that the funds would be transferred within days, the CEO of the [Kaviim] company decided to grant the request of the minister to continue providing the services as usual," wrote the company in a statement.Kaviim stressed that they agreed to continue providing public transportation services "within the understanding that this incident of the funds being refused by the Finance Ministry will not happen again."The company thanked Smotrich and his team for finding a solution to the crisis and the mayors and authorities in areas they service for their understanding.After the announcement that the strike was cancelled, the 15 Minutes organization stated that they would be keeping track of the issue to make sure that bureaucratic issues don't disturb public transportation users.On Wednesday, the Kaviim bus company, one of the main public transport providers in Israel, had announced that it would cease services throughout the country starting Friday because it did not receive funds that the government promised.Itay Fleisig, the Company Service Manager, stated on Wednesday that Kaviim spoke with all relevant authorities, including Prime Minister Benjamin Netanyahu, ministers and officials in the Ministry of Transportation and Finance Ministry, according to Ynet."Sadly, no official informed us as of the date of writing this letter that the Ministry of Transportation intended to pay the cost of the trips traveled. In light of this, in the specific situation of Kaviim and in order to reduce damages, we are forced to inform you of the cessation of public transportation operations in your area," wrote Kaviim to the heads of authorities and cities where the company functions.Starting on Sunday or Monday, additional companies will join Kaviim in ceasing operations, including Dan, Afikim, Superbus, Netiv Express, Dan North and Dan South, wrote Or Grinfeld, the head of the "We, the Youth" Party in the central Israeli city of Modi'in Maccabim Reut, on Facebook. Egged is not currently planning on joining the strike, according to an Egged spokesperson.In an unrelated move, Egged Taavurah workers announced that they would strike on Thursday for four hours from 5 a.m. to 9 a.m. to protest against the company's refusal to advance negotiations about working conditions and an attempt to harm the unionization of the workers, according to Walla! news.According to the letter from Kaviim, Kaviim and other public transport companies received a phone call from a representative of the Ministry of Transportation that due to a decision by the Accountant General, the ministry would not be paying for public transportation trips that were conducted through the companies in November and at earlier points. The payment was originally supposed to transferred to the companies on Thursday."The public transport companies receive subsidies from the Ministries of Transportation and Finance for their operations that allow them to exist," wrote Grinfeld."Because elections were called yet again, and after this was done two months ago, the Accountant General in the Finance Ministry decided to freeze the transfer of payments that the transportation companies are supposed to get according to law," added Grinfeld. "The result is that in just a few days the gas supply and maintenance and cleaning services of the company will not be renewed.""Third elections: here are the results," said Grinfeld.The organization 15 Minutes wondered in a Facebook post if the Accountant General expected public transport users to "push the buses down hills in order to get them to the bus stops" and called on the government to make an immediate decision to transfer the promised funds to the bus companies in order to ensure that there will even be buses to travel on next week.According to 15 Minutes, the lack of funds means that the companies aren't able to pay providers or employees and some companies will stop receiving gas supplies in the coming days.On Wednesday morning, two protest convoys consisting of 50 buses each from all of the public transport companies that are privately owned, as well as the Dan company, traveled to the Government Campus in Jerusalem and the HaShalom Interchange in Tel Aviv. The convoys were protesting the decision by the Accountant General.