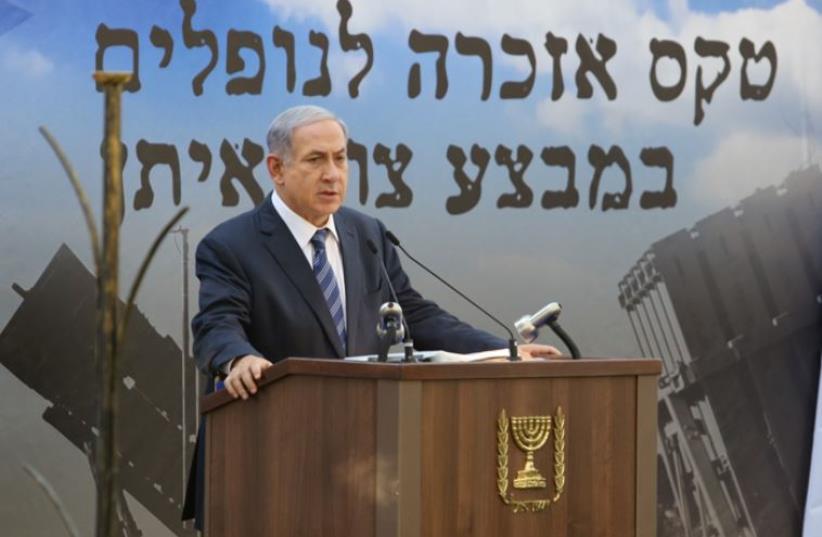 PM Benjamin Netanyahu speaks at a ceremony commemorating the fallen soldiers of Operation Protective Edge.
(photo credit: GIL YOCHANAN/POOL)
Advertisement
“I stand here this evening tearful, with a heavy heart on this sad and silent mountain – Jerusalem’s mountain of loss and longing,” President Reuven Rivlin said on Mount Herzl during Monday’s first annual memorial service for the fallen soldiers of Operation Protective Edge.“A year has passed since that difficult summer; the summer in which we lost 67 soldiers – the brightest and the best of our fighters – as well as civilians and loved ones,” said the president.
Operation Protective Edge
“They are so loved and so greatly missed.”Nonetheless, as he spoke before a crowd of hundreds – including dozens of bereaved families, soldiers, Prime Minister Benjamin Netanyahu and Defense Minister Moshe Ya’alon – Rivlin made clear that the profound loss was a necessary evil to protect a nation under attack.“The State of Israel will not accept a situation in which our towns are subjected to repeated and ongoing attacks,” he said.“When there is no fire at Sderot, Nahal Oz or Ashkelon, there will be no fire at the Gaza Strip… Only the eradication of terrorism will bring an end to the killing of innocents on both sides.”Rivlin described the violent 50-day war as moral and just, “fitting of a sovereign state called upon to defend its citizens.”“In the weeks leading up to the operation, each day dozens of rockets were fired at the residents of the South and the towns on the front line,” he said. 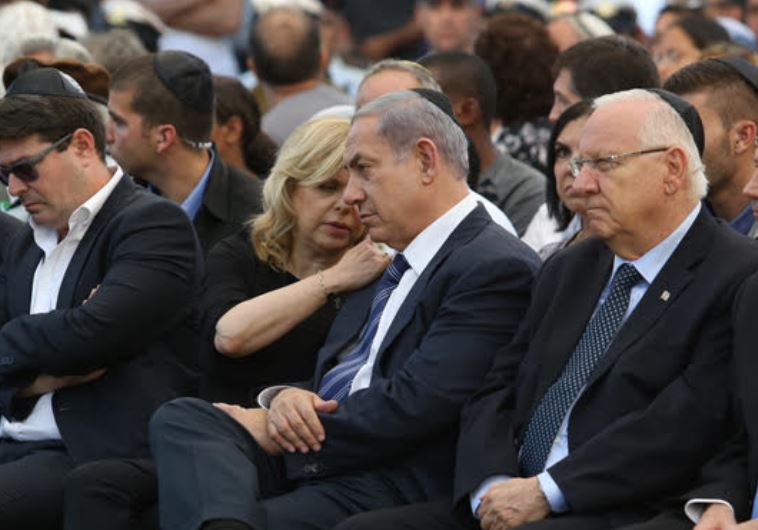 “Children, women, the elderly and men, were subjected to waves of shock, and the screeching threat of death. Terror tunnels dug underneath kindergartens and cafes, in clearly civilian areas, with the aim of murdering people who simply sought to sow their field, plant an orchard, build a home.”Invoking the recent spate of rocket fire against communities in the South and wave of terrorist attacks in the West Bank and Jerusalem, Rivlin made clear that the IDF will not hesitate to defend the nation, despite the heavy toll.“We are not a people of war, but if forced to take up arms to defend our borders and our existence, we will not hesitate to do so,” he said.“The State of Israel cannot continue to be held hostage by an enemy that operates in the heart of their civilian population. An enemy that does not respect human rights, that does not respect human life – an enemy that scorns international law and democracy.”Noting that there are still many for whom the war has yet to end – including the families of two missing soldiers, St.-Sgt. Oron Shaul and Lt. Hadar Goldin – Rivlin said, “So, too, the mission of the State of Israel remains incomplete.”“We are still yet to see the return of two of our sons,” he said. “We shall not rest until we bring them for burial in Israel.”Indeed, some attendees at the memorial said they have yet to experience closure of any kind.Zava Shaul, whose son Oron, 20, has been missing in action for nearly a year, was among them.“I want people to remember my son, and I believe he is alive because I have never gotten him back,” she said. “For me, the war is never finished because my son never came back.”In the meantime, Batia Weinberg, a coordinator for One Family, an NGO established during the second intifada to support bereaved families, said her organization supports 3,800 families throughout the nation dealing with the trauma of such loss.“The families should see we are here and support them all year round, but especially today,” said Weinberg, noting that the organization works with 2,000 bereaved families and 1,800 families of wounded soldiers.Naama and Effy Rahav, whose son Bar, 21, was killed in Gaza shortly after the war began, said they take solace in spending time with other parents who have experienced similar heartbreak.“It’s the one-year anniversary, and it’s good to meet with the other parents, and we think it’s important for all the people of Israel to take a moment and remember our sons,” said Naama.“We know that a lot of people remember, but this is one day and one hour that everyone can think of them because we think about them all the time,” she continued, her eyes filling with tears.“My son had his 22nd birthday last Friday, so it’s a very hard time now.”Meanwhile, Netanyahu – whose brother Yoni was the lone Israeli soldier killed during Operation Entebbe in Uganda in 1976 – said that while he empathizes with each bereaved family’s pain, he takes solace in knowing that his brother, and all fallen soldiers, saved lives.“There isn’t any remedy for your pain,” he said. “But with all that pain, you truly understand that your loved ones saved lives… for the sake of Israel.”Moreover, while Netanyahu said the decision to go to war is never taken lightly and that each fallen soldier is like a son to him, he emphasized that the IDF will “never hesitate to protect our country.”“We come in peace, but we will protect our children and our future,” he said.Still, the prime minister ended his speech on a hopeful, if not philosophical, note.“Life is a flowing river that takes us forward and you will eventually know days of hope and happiness,” he said. “There will always be pain, but your loved ones died as heroes."