By HAGAY HACOHEN
JANUARY 19, 2018 11:25
A Palestinian driver rammed IDF soldiers with his vehicle at a checkpoint near Qasr el Yahud, in the West Bank, Friday morning. Three men were slightly wounded in the incident, which took place after the driver was denied passage at the road block.The driver attempted to flee to the Allenby Bridge, on the Jordanian border, but was arrested by authorities. Rescuers Without Borders reported that one IDF soldier suffered a leg injury and was offered first aid.  Security forces are present at the scene.Qasr el Yahud is a popular baptism site for Christian pilgrims.For the full story, click here. 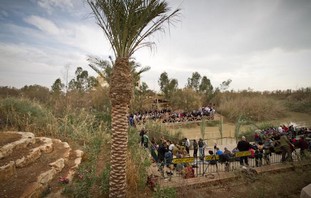