A challenging year for Israeli society 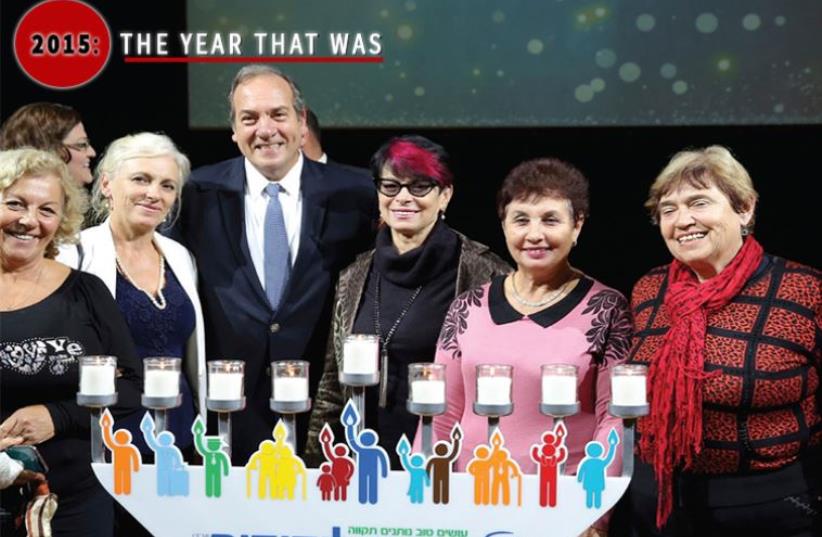 Rabbi Yechiel Eckstein and IFCJ volunteers at the lighting of the eighth candle of Hanukka
(photo credit: ADAM KAPLAN,JPOST STAFF)
Advertisement
The year of 2015 was most challenging for Israel and its people.It got off to a stormy start with a heated election cycle that followed the collapse of the government and the need to create a new coalition less than one year later.The election was marked by strong rhetoric that further polarized Israeli society – between its political Right and Left, Jewish and Arab populations, religious and secular members.Unfortunately, this divisive rhetoric once again stole the spotlight away from Israel’s more pressing needs – namely a substantive discussion and implementation of far-reaching solutions to increasing poverty levels, widening social gaps, soaring housing prices and the rise in the cost of living. Politicians, schooled in sound bites and television ratings, eschewed bipartisan efforts in favor of fighting for their own constituents’ narrow piece of the pie. This made it harder for government to come together and put in place serious reform that would lift people out of poverty and restore dignity to their everyday lives and struggles.Early last month, the National Insurance Institute published the statistics from its 2014 report on poverty. It shows a marked increase in the number of residents – mainly children and elderly – who live in poverty. While it relied on figures from 2014, 2015’s numbers are expected to be equally bleak. One in three children lives in poverty. Among our elderly, that number is one in four. For a “Start-Up Nation,” whose companies are regularly traded on the world’s stock exchanges, these numbers are simply unacceptable.While the country’s leadership is busy with sex scandals and blaming the other side, millions of citizens are falling into despair. Israel’s leadership reminds me of parents locked in a battle of wills, who fight and yell at one another, with no regard as to how their behavior affects their children – children whom they profess to love and cherish above all else.In the meantime, the children are suffering.Instead of making plans for further education that will improve their lot in life, as many of Israel’s future generation is busy worrying about where its next meal will come from.The current economic and welfare system is simply not capable of providing an adequate safety net for its citizens. It will come as a shock to learn that there is no national program in Israel similar to food stamps in America. No program to provide heat in the winter or shelter all year long. I fear that if this situation continues, in a few years we will find ourselves with a state that simply cannot function.Those at Israel’s helm – the prime minister, opposition head and most of the Knesset members – are compassionate people who hold the best interests of the people at heart. However, too often they abdicate their responsibility for cheap rhetoric and bombastic statements that might win favor on television programs but which have little lasting legislative impact for the poor who so often go hungry at night.There are a few signs of progress on the horizon. The 2016 national budget features several steps to expand elderly benefits (though not nearly enough), increase benefits for children and initiatives to lower housing costs. Still, the budget lacks any large-scale, systematic solutions that address Israel’s poverty numbers through a holistic approach over, say, a 10-year period that involves education, healthcare, welfare and housing improvements.This past year, Israel had to contend with threats from the outside world, as well.In 2015 the country saw an uptick in terrorist attacks and in the aggressive spread of global anti-Semitism and hatred of Israel. Unfortunately, Boycott, Divestment and Sanctions campaigns continue to undermine the legitimacy of the state and to further isolate Israel, Israeli companies and leading academics.This year it seemed like the biblical verse, “a people that shall dwell alone” (Numbers 23:9) served as a particularly apt description for our state of isolation in the world. Added to the fact that fundamental Islam is raging across the Middle East and Europe, carrying out acts of terrorism and often picking out Jewish targets, there are many reasons to hang our head low or to give up with the whole project.However, to my great joy, this bleak picture doesn’t tell the whole story. Israel’s enemies might be loud, conspicuous and violent. Nevertheless, they’re not the only ones out there. Standing alongside Israel is an immense community of Israel-loving Christians who number in the hundreds of millions worldwide and who provide critical support for Israel and our global Jewish community. These Christians vote with their feet and visit in huge numbers each year. They make their political support known through their elected officials and through the billions of shekels they donate to the International Fellowship of Christians and Jews and to other organizations. Their donations strengthen Israel’s weaker populations, provide security for border cities, safeguard Jewish communities and institutions throughout the world, and help those Diaspora Jews who seek to make aliya to do so, while also providing for their long-term absorption.Now is the time for Israel to not only fight its enemies but to embrace and appreciate its allies on the global stage and to nurture and strengthen these bonds on a state level. To date, the Fellowship has raised close to NIS 4 billion from more than 1.5 million Christian donors who actively support Israel. These strategic ties and an investment in global advocacy on the country’s behalf must continue if Israel is to be resilient from within and without, and is to stand the great challenges of the coming year.