Nina and Daniel Green are a married couple in Tel Aviv who, despite working full-time jobs, have managed to carve out the time to help hundreds of olim find jobs after immigrating.

Finding work in Israel can be a daunting task — and more so for immigrants who aren’t yet accustomed to the country’s fast-moving and somewhat aggressive character. Add in a limited or non-existent hebrew vocabulary, and things can start feeling pretty dire.

There are, however, certain individuals within the country who have dedicated much of their time to helping newcomers to Israel find good work. Nina Green is one of those people. In the last decade, she’s helped over 400 immigrants find gainful employment, organizing spreadsheets, editing CVs and preparing them for interviews in order to ensure they have their best shot at getting hired.

When Nina made Aliyah 12 years ago, she quickly realized that it was pretty difficult to integrate yourself into Israel, contrary to her initial expectations. “I came [to Israel] 12 years ago from Manhattan, and I thought that the process of AliyaH (immigration) was going to be super easy because I already spoke the language, I had family here — I was like, ‘okay, it’ll be super, super simple.’ It was far from that,” Nina recalled.

The realization that she — someone with a fair bit of preparation — could struggle with finding her footing in Israel was a flashpoint for Nina. “I promised myself that the minute that I had my own apartment and a job and felt steady and stable, that I was going to help other olim acclimate: to help them find a job and an apartment and do whatever I can to make the process much smoother, so that they would have a successful Aliya,” she said. 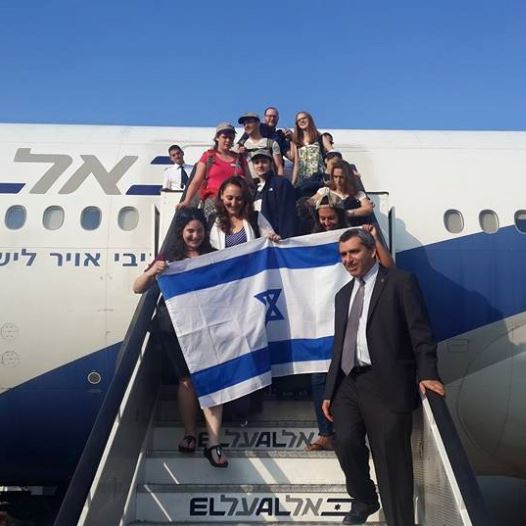 Fast forward ten years: Nina has volunteered with Nefesh B’Nefesh, Tech it Forward and a handful of other organizations. Nina has become a master juggler, keeping her full time job as social and community leader for Atera, her growing home life and keeping work, home life and her extensive volunteer work up in the air at the same time. “In general, at any given point, I have about 20 to 30 CVs at a time open on my laptop,” she said.

Nina isn’t alone on her crusade against oleh joblessness: also pitching in to the effort is her husband, Daniel, the CTO and co-founder of insure-tech start-up Faye. While his approach to volunteering is “a lot less organized than Nina’s,” Daniel has found that his years running a company have made him a great source of contacts for fresh faces in the country who lack a network of business connections.

“For people who make aliyah and they didn’t necessarily go through the army, they often feel like they’re missing out on that network, and they don’t necessarily have those kind of ‘behind the scenes’ connections that get them into companies,” he explained.

With that in mind, he has found himself assisting people who need to connect with potential employers from scratch. “Sometimes it’s helping people understand what companies are looking for and how to best portray themselves in that light. Sometimes it’s making direct connections to companies that are hiring,” said Daniel.

Together, the couple continues to represent one of the critical, selfless lifelines available to those hoping to make their way in Israel after immigrating. “People have always asked me ‘why don’t you charge for it?’’ said Nina. “For me, it’s sort of selfish — I like doing it. I love doing it. And it makes me happy to help other people. As of today, I’ve helped over 400 people find employment, at least that I know of. So it’s been a pretty good run.”