EcoPeace: The state comptroller’s report presents “a scathing assessment of failure for more than two decades of Israeli government action and inaction.” 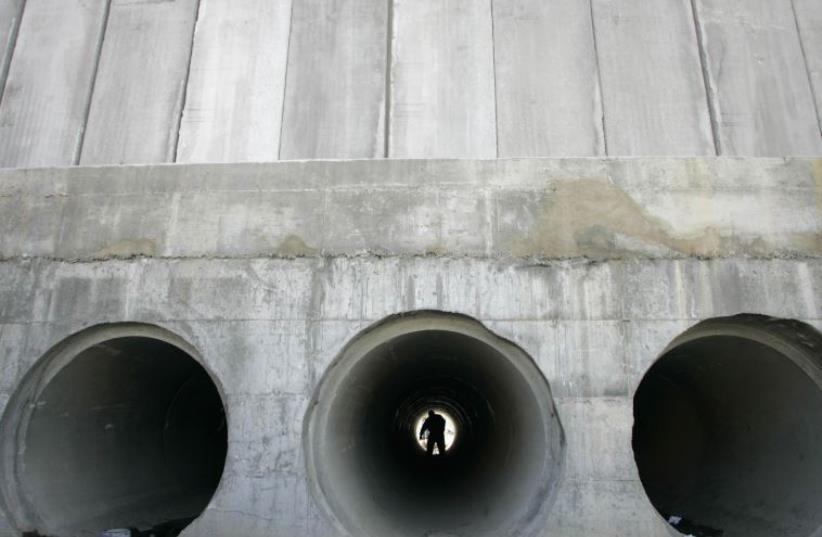 A Palestinian walks through a water pipe underneath the controversial Israeli barrier in al-Ram, on the edge of Jerusalem [File]
(photo credit: REUTERS)
Advertisement
Describing water pollution as nothing less than Israel's most serious cross-border environmental hazard, State Comptroller Joseph Shapira called upon the government authorities to join forces to reduce the contamination of resources shared by Israel and the West Bank and Gaza. Such widespread pollution, according to the comptroller, not only damages the groundwater of Israel and its neighbors, but also harms public health and quality of life. The government of Israel has yet to formulate a policy for transboundary environmental management with its neighbors, and lacks any policy regarding hazards that cross the Green Line and the border with Gaza, Shapira stressed. "Due to the geopolitical situation in the West Bank and the Gaza Strip, this issue also affects Israel's political-security situation and its status in the world," he wrote. Because the government failed to define a single entity to lead this subject, for many years solutions to serious ongoing environmental problems have been delayed and continue to harm both public health and Israel's political interests, Shapira explained. His audit – which looked at the treatment of contaminated cross-boundary water resources from February to October 2016 – paints "a gloomy picture regarding the activities of government agencies," he added. Shapira blamed a series of failures for the problematic situation, such as the discontinuation for years of the Joint Water Committee – which was eventually revived in January 2017. He also criticized the weakness in coordination of activities among government agencies, the low level involvement of the political echelon and the failure to make decisions on important issues. "These failures and obstacles have a direct connection to the emergence and exacerbation of a range of environmental and other hazards and damage on both sides of the Green Line," he wrote. Some particularly problematic spots have been the Kidron, Alexander, Nablus, Hebron and Michmash rivers, as well as pollution from rivers and estuaries in Gaza. Shapira particularly criticized the Civil Administration, the Coordinator of Government Activities in the Territories, the Water Authority, the Environmental Protection Ministry, the Health Ministry, the Foreign Ministry and the Regional Cooperation Ministry, as well as a number of local authorities and water corporations. In addition to pointing out specific actions that each of these bodies must take, the state comptroller called upon all of these authorities to come together to take "systemic action that will lead to the formulation of a comprehensive implementation plan" to ensure a significant reduction in pollution levels. To do so, he stressed that all parties must work together in an inter-ministerial team, as well as enlist the relevant support of international bodies and encourage new projects to protect the environment.  The Environmental Protection Ministry welcomed the state comptroller's findings, stressing that "environmental issues do not consider boundaries created by man." "When a particular environmental issue such as water, air or waste is not treated well on one side of the border, it also affects the other side," the ministry said. "Therefore the environmental continuum must be treated as a whole, even if their sovereign boundary lines makes their treatment difficult."The ministry said that in recent months, its officials have been working to reduce a number of cross-border environmental problems, but stressed that the office has limited resources available to do so. Along with the interior Ministry and Civil Administration, the Environment Ministry is currently preparing a draft government plan to integrate all of these issues."The ministry is convinced that only concerted government action and significant investment in appropriate infrastructure will improve the environmental situation in the future," the office said. COGAT, meanwhile, emphasized that while the Civil Administration performs daily activities to promote environmental protection, it is difficult to truly eliminate ecological hazards from the West Bank and Gaza without the cooperation of the Palestinian Authority. Nonetheless, Coordinator Maj.-Gen. Yoav Mordechai spearheaded the renewal of the Joint Water Committee as well as the signing of an agreement to promote water projects, which aims to provide a solution for the entire area and reduce pollution from effluents discharged into the rivers, a statement from COGAT said. In the past year, enforcement activities have occurred in Area B to eliminate environmental hazards and protect residents.As far as Gaza is concerned, the statement stressed that COGAT has worked to promote a number of projects with the international community and has suggested several solutions that have not yet received Palestinian approval."COGAT will continue to work with the PA and the international community to promote these solutions to prevent and reduce environmental hazards," the statement added.Gidon Bromberg, Israel director of the cross-border environmental organization EcoPeace, said that the state comptroller’s report presents “a scathing assessment of failure for more than two decades of Israeli government action and inaction.”“Twenty-three years after signing the Oslo Accords, the report reveals that the Government of Israel never prepared a national strategy on how to deal with cross-border pollution issues, though all authorities involved were well aware of the public health and environmental threats,” Bromberg said. As a result, he argued, the various ministries involved have  “either tried to pass on responsibility to other Israeli ministries or turn the issue into a political blame game.” “The report is a last minute wake up call for change in government policy and leadership,” Bromberg added. “The report highlights the ticking public health time bomb for Israel and the region of the water and sanitation crises in Gaza as a present day example.”