Jerusalem lags behind other major cities in recycling sector. 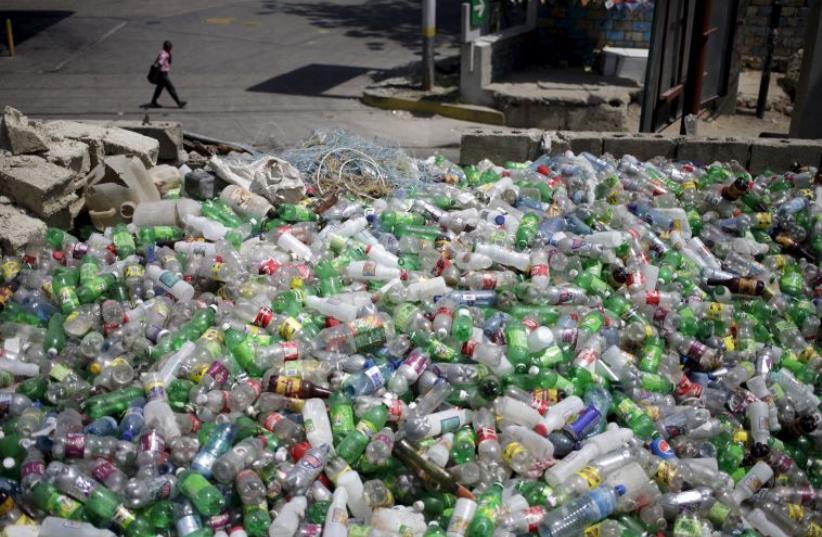 Plastic bottles to be sold for recycling are seen at a storage
(photo credit: REUTERS)
Advertisement
While most Israelis tend to recycle their plastic bottles, only about half the population recycles paper and cardboard, a Central Bureau of Statistics survey revealed on Wednesday.All in all, about 67 percent of Israelis recycle their plastic bottles, as opposed to the 52% who recycle paper and cardboard, according to the report.Far fewer people take their batteries, electrical products, and medicine containers to designated recycling spots. In nearly all the recycling sectors surveyed, the city of Jerusalem fared particularly poorly.The report, titled “Data on Recycling Habits of Israelis,” is part of the ongoing CBS 2014 Social Survey, which examines the living conditions of population members aged 20 and older and focuses this year in particular on a number of environmental issues.Throughout 2014, the country’s local authorities recycled a total of 900,000 tons of waste, constituting about 18% of the total garbage collected, the CBS survey said. Recycled materials mostly consisted of wood trimmings – 38% of all recycled materials – and inorganic products, at 19%.Examining the data more closely, the report identified the highest rates of plastic bottle recycling in Netanya, Ashdod and Tel Aviv, where 84%, 83% and 82% of residents recycled their plastic bottles.While the plastic bottle recycling rate in most major cities ranged from 69% to 76%, the rate in Jerusalem was much lower, at 48%, when including east Jerusalem residents. When just examining the behaviors of Jerusalem’s Jewish population, the CBS found that 72% tend to recycle their bottles.In all major cities except Jerusalem, more than 80% of residents said that they have bottle recycling bins in their immediate areas, according to the survey.In Jerusalem, only 57% of all residents and 84% of Jewish residents said they have bins near their homes, the report said.Nationally, only about 42% of Israel’s population brings small plastic bottles, glass bottles and cans back to supermarkets to get back bottle deposits, according to the survey.In the paper and cardboard sector, the CBS report found that although 78% of Netanya residents and 71% of Tel Avivians recycle these items, only about 40% in Bnei Brak and 31% in Jerusalem do so. The capital city’s figures rise to a slightly higher 48% when only taking into account the paper and cardboard recycling behaviors for the Jewish sector.The battery, electrical product, and medicine categories painted an even more dismal picture. Around the country, only about 32% of Israelis recycle their batteries, while 11% do so with electrical products and 14% bring medicines back to pharmacies and health clinics, the CBS survey said.In total, about 57% of the country’s population reported satisfaction with the recycling services available in their areas, with the most highly satisfied cities including Rishon Lezion (76%), Ashdod (70%), Petah Tikva (66%) and Tel Aviv (63%).Only about 55% of residents were satisfied in Haifa, and only about 32% in Jerusalem – 48% of Jews and 5% of Arabs, the survey said.Data on other environmental issues examined in the 2014 survey, including energy efficiency, water conservation and open space, will be published in the coming months, the CBS report said.In response to the report, the Environmental Protection Ministry said that it is continuing to promote the “recycling revolution” in Israel, with a goal of recycling 50% of waste produced in the country by 2020.“The CBS Social Survey will serve the ministry as an additional tool for examining activities related to recycling, and the ministry will evaluate those places and issues around the country running according to different policies,” a statement from the ministry said.Meanwhile, at the Cleantech Recycling Convention in Airport City on Wednesday, Environmental Protection Minister Avi Gabbay expressed similar sentiments.“In the current situation, the main efforts are directed toward transforming Tel Aviv to Copenhagen, but in order to reduce disparities and strengthen the weak, we need to allocate resources and transform weaker cities and neighborhoods to Tel Aviv,” Gabbay said.