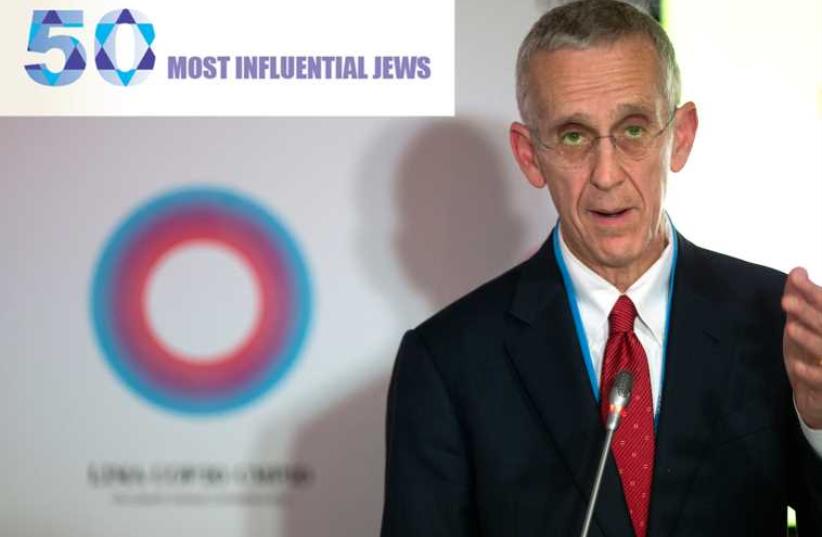 Todd Stern
(photo credit: EITAN ABRAMOVICH / AFP)
Advertisement
The Jerusalem Post has put together its annual list of '50 most influential Jews' who have impacted the world last year, and have the potential to affect change in years to come. Todd Stern Obama’s best bet for an environmental upheavalWhether it is tens of millions of Africans parched by severe drought, dozens of island nations eyeing rising sea levels, or anxious countries along the route of increasingly powerful monsoons, all of the billions affected by climate change will be looking toward the world’s main superpower this December to stitch together a historic global climate deal at the UN’s Paris climate talks.The Herculean task of corralling 190 rich and poor countries around a global climate pact that has teeth – and potentially saving the world – belongs to 64-year-old Todd Stern, US President Barack Obama’s special envoy for climate change. Originally appointed to the position by Secretary of State Hillary Clinton, Stern earned his green credentials leading the US team at the Kyoto Protocol climate talks. A former deputy staff secretary and assistant to former president Bill Clinton, Stern is a graduate of Dartmouth College and Harvard Law School.“The only sustainable development is low carbon development,” Stern told lawmakers at a congressional hearing after the failed Copenhagen Climate Change Conference in 2009. After 21 years of UN-sponsored climate talks, Paris aims, for the first time, to achieve a legally binding and universal agreement on climate policies, from all nations in the world, in order to keep temperatures from rising no more than the recognized benchmark of 2 degrees Celsius. If temperatures go any higher, scientists believe, a series of catastrophic events will radically affect life on the planet.While the Europeans will accomplish their ambitious renewables goal of 20 percent by 2020, Israel lags far behind today at a mere 2% renewables, and the Finance Ministry is holding back the country to not even reach a modest 10% renewables in the next five years. The UN Climate Change Conference in Paris is going to try to extract binding commitments from Israel and other green slackers to get with the global program and aggressively reduce greenhouse gas missions.The odds of Paris succeeding increased significantly after Stern engineered a historic emissions deal in 2014 between China and the US – the two largest emitters of greenhouse gases. Israeli innovation in green energy, especially in the developing world, could be one of the aces up Stern’s sleeve, as he will need to persuade developing nations to abandon plans for coal- and diesel-fired power plants in favor of solar and other renewables.Stern demonstrated his early appreciation for nature when he and his wife, Jennifer Klein, were married in the Brooklyn Botanical Gardens. The Paris climate talks will conclude during Hanukka this year, with Stern and others hopefully lighting a brighter path for humanity and the plane Yosef Abramowitz is the President and CEO of Energiya Global Capital as well as the co-founder of the Arava Power Company.Efi Stenzler Israel’s Mr. GreenThe influential world chairman of the Keren Kayemeth LeIsrael-Jewish National Fund has turned what he calls “”Israel’s largest green organization” into an international environmental powerhouse. KKL-JNF, which has its roots in planting trees and developing the land, has now branched out into a broad range of fields – from creating parks (such as the Beersheba River Park – the largest park in Israel), reservoirs and dams, to constructing walking trails and bicycle paths. It also forms close partnerships with Jewish communities around the world, leading new educational Zionist and environmental activities in Israel and abroad among Jews and non-Jews, establishing new communities, expanding existing ones, and supporting agricultural research and development.KKL-JNF contributes from its vast knowledge in the fields of forestry, agriculture, research and food production to developing countries such as Rwanda, Kenya and Ethiopia. In addition, at the Expo 2015 in Milan, which will be focusing on global challenges in the field of food, KKL-JNF is partnering with the Israeli government to present innovations and breakthroughs in these fields.Since taking the reins of KKL-JNF in 2006, the former mayor of Givatayim has expanded its scope from “turning Israel into a fertile oasis of flourishing agriculture with forests” to striving toward “a lasting development of the state in order to preserve our natural resources and environment for future generations.”He sees KKL-JNF, which was founded as an NGO in 1901, as an innovative organization that uses modern methods to fulfill the Zionist dream of developing the Land of Israel. Under the leadership of Stenzler, KKL-JNF has become the largest and most influential green Jewish organization in the world.Contributors: Steve Linde and Yosef I. Abramowitz