Protesters demand greater use of Israeli water tech at home

Mapal CEO: If we can reduce the energy cost of wastewater treatment, why are they not chasing after us? 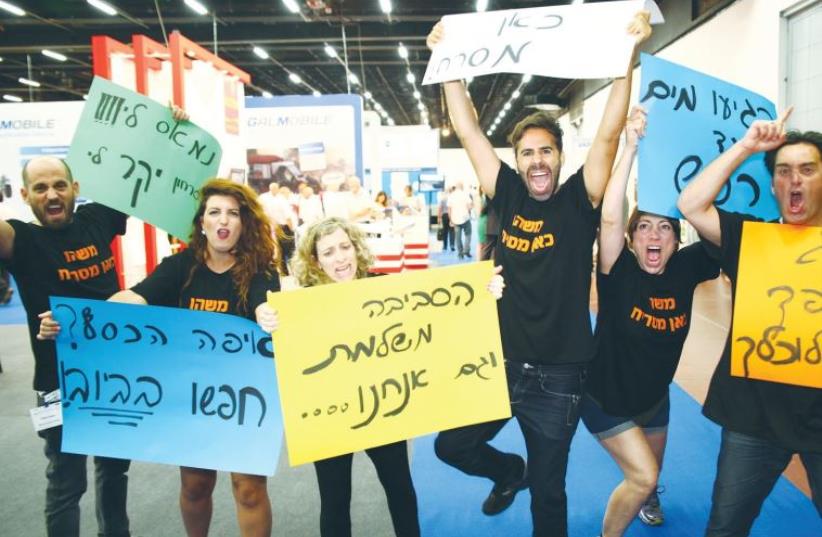 ACTIVISTS AT the WATEC exhibition at the Tel Aviv Convention Center yesterday call for implementing Israeli water tech at home
(photo credit: MAPAL GREEN ENERGY)
Advertisement
Theatrical protesters took to the exhibition halls of the giant biennial WATEC exhibition in Tel Aviv on Wednesday, calling for the implementation of Israeli water innovation not just abroad, but at home in the Jewish state.Although a large number of Israeli solutions for wastewater and other water issues were on display at the exhibition, the protesters argued that the government is not doing enough to ensure such technologies are employed in their country of origin.The protest was led by Mapal Green Energy, a Kibbutz Yagur-based firm whose primary technology is a “Floating Fine Bubble Aeration” system that provides purification to municipal and industrial wastewater treatment plants around the world.“If we can present technology that can reduce the energy cost of wastewater treatment, why are they not chasing after us?” Mapal CEO Zeev Fisher asked The Jerusalem Post over the phone.While other countries, such as the United Kingdom, are increasingly eager to adopt Israeli water technologies for their utilities, the same cannot be said for those in Israel, Fisher explained. In his work with the UK’s water systems, Fisher said he has appreciated “the open door, the willingness” to explore innovations.“This is not something we can find in Israel,” he said. “There is much more willingness to bring [in] other technologies from the US and Europe.”In Israel, the main markets for water entrepreneurs are the industrial and private sectors, rather than the local government-run water corporations, he explained.At Mapal, Fisher said he is trying to demonstrate to the public-run utilities, regulators and companies, that implementing Israeli-born purification technologies such as his can massively reduce energy costs and provide significant environmental benefits at the country’s sewage plants.“We are not losing hope,” he added. “We keep trying.”When asked why he was so determined to see his company’s technology operating on a wider scale in Israel when it is already performing well in many other countries, Fisher pointed to national pride.“First of all, we’re Israelis,” he said. “I have children here, I care about this country.”“It’s not something that will bring the company up or down,” Fisher added. “The issue that we raise here is awareness.”