Homeowners who fail to prevent the spread of red palm weevils will face a NIS 730 fine, the cost for the city to take care of treatment 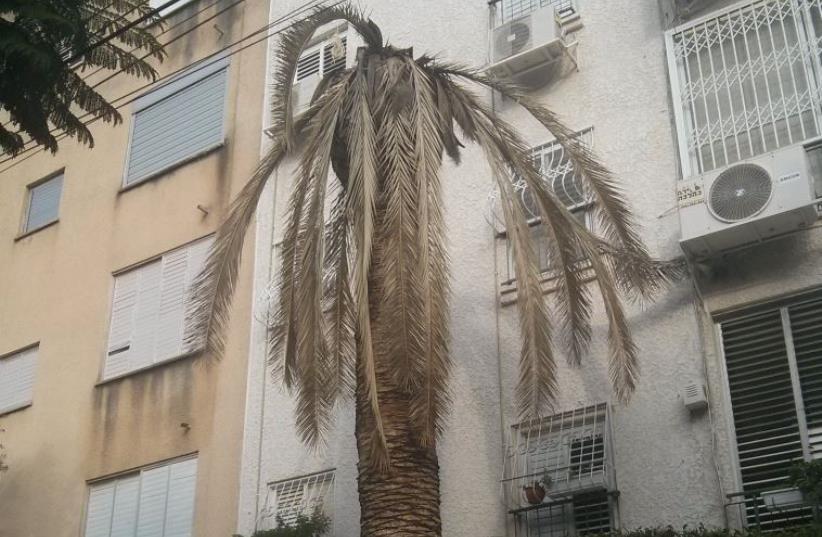 A tree infested by the invasive red palm weevil, a type of beetle
(photo credit: TEL-AVIV YAFFO MUNICIPALITY)
Advertisement
Due to heightening fears that the ongoing spread of red palm weevil infestations will lead to spontaneous tree collapses around the city, the Tel Aviv-Yafo municipality is demanding that private homeowners take certain measures to handle infected palms on their property.Red palm weevils are potentially so damaging to these plants that they can cause the collapse of an entire tree, a statement from the city explained. Although the municipality has treated the phenomenon among trees found in the city’s public spaces, many private homeowners have failed to do so within their property bounds – enabling the disease to continue to spread.As it became clear recently that dozens of infected trees are still present in Tel Aviv’s private yards, the municipality began to issue demands that residents take care of cutting down their damaged plants in a controlled manner, to prevent unexpected collapse.On Tuesday, the municipality announced that if property owners fail to treat their trees within 14 days, they will be subject to a NIS 730 fine. The city’s beautification department will then take over responsibility for the treatment, and will cut down infected trees, charging the owners for the service, the municipality said.There are thousands of palm trees growing throughout the Tel Aviv-Yafo municipality, including hundreds of trees in public spaces. Over the past year, since the red palm weevil was identified in the city’s bounds, the municipality said its workers have been conducting preventative treatments on palms within the public domain, adhering to the guidelines of the Agriculture Ministry.Simultaneously, the city has issued instructions to residents on how to eradicate the phenomenon by means of injections or sprays several times a year.All in all, about 270,940 trees of all types grow in Tel Aviv, of which about 160,940 are found in public spaces, according to city data. Stressing the importance of urban plant growth to residential quality of life, as well as the millions of shekels invested in their preservation, the city urged residents to be proactive and protect the palm trees from the red palm weevil’s clutches.“The municipality calls upon all those homeowners whose yards have palm trees to expedite treatments against the weevil... and help eradicate the pest from all the city’s trees,” the city’s statement said.