The experiment took place in a special room in which the Egyptian fruit bats that Ulanovsky works with are free to fly about. 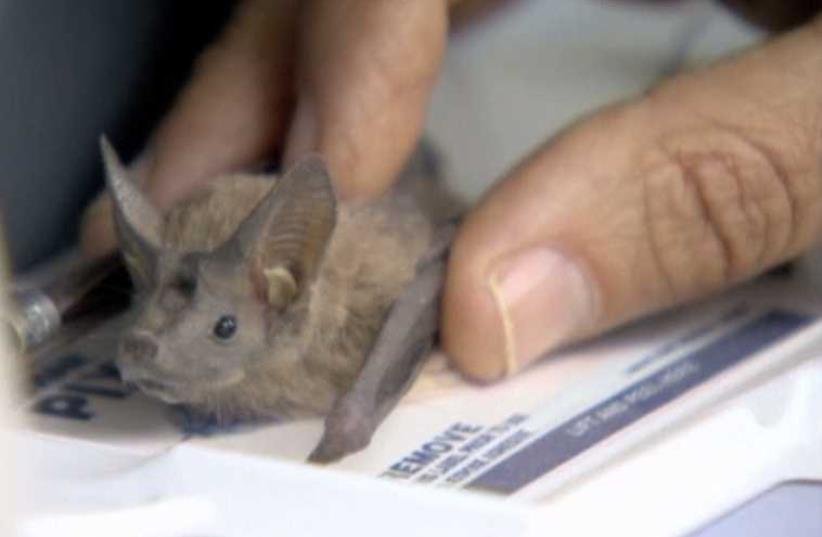 Israeli research on bats alters concept of mammal hibernation.
(photo credit: screenshot)
Advertisement
Whether you are a human or a bat, navigating to a destination requires a complex set of calculations and interactions among brain cells. Weizmann Institute of Science researchers working with bats have now revealed the network of cells that encode the direction of one’s destination.Among other things, their findings may help explain how memory loss and “getting lost” tend to go together in Alzheimer’s patients.The Nobel Prize in Physiology or Medicine was awarded in 2014 for the discovery of place cells and grid cells – neurons in a part of the brain called the hippocampal formation that tell us where we are in relation to our surroundings. When we are on the move, these cells chart our starting point, but the way in which our brains direct us to a specific destination has remained unsolved.Prof. Nachum Ulanovsky and research student Ayelet Sarel of the Weizmann Institute’s neurobiology department, working together with their colleagues Drs. Arseny Finkelstein and Liora Las, devised a simple experiment with bats to answer this question. The findings of their research recently appeared in the journal Science.The experiment took place in a special room in which the Egyptian fruit bats that Ulanovsky works with are free to fly about. Tiny tracking devices attached to the bats enabled the researchers to track their flight paths, on the one hand, and record the activities of the neurons in the area of the hippocampus that deals with navigation, on the other. The bats’ destination: a stand with the fruit they prefer.Around one-third of the neurons in a bat’s hippocampus represented the animal’s current position in the flight room. But in addition, some 19% of the cells were engaged in encoding the destination – the beckoning fruit stand. To further understand how this encoding works, Ulanovsky and Sarel then hid the fruit stand behind a screen. The bats’ neurons continued to aim toward the stand – “through the wall” – even though it was hidden from sight. In other words, say the researchers, the direction in which we need to travel to get to our destination is represented in the brain based primarily on our memory, and not, for example, on our sense of vision That is why we can find the coffee shop hidden behind tall buildings and the bat can find its favorite fruit tree, even when it is beyond a range of hills. It may also explain how injury to the hippocampus, as well as Alzheimer’s disease, often contribute to getting lost on the way to navigational destinations.The scientists additionally identified a group of nerve cells that calculate and encode the distance to a bat’s destination, while some of the cells, they found, encode both direction and distance.“This is a bit like the navigation systems in our cars that give distance and travel time, in addition to directions. The brain has found a simpler way, encoding these in a sort of vector, or ‘arrow’ pointing the way,” said Ulanovsky.“These neurons are continually computing and integrating information on our direction and the distance to our destination.”BLOOD-REPELLANT APPROACH TO MEDICAL IMPLANTSMedical implants like stents, catheters and tubing introduce risk of blood clotting and infection, which are perpetual problems for many patients. Colorado State University engineers offer a potential solution – a specially grown “superhemophobic” titanium surface that is extremely repellent to blood. The material could form the basis for surgical implants with lower risk of rejection by the body.It’s an innovation achieved at the intersection of two disciplines – biomedical engineering and materials science. The work, recently published in Advanced Healthcare Materials, is a collaboration between the labs of mechanical and biomedical engineering Prof. Arun Kota and Prof. Ketul Popat. Kota, an expert in novel materials that repel virtually any liquid, joined forces with Popat, an innovator in tissue engineering and bio-compatible materials.Starting with sheets of titanium, commonly used for medical devices, their labs grew chemically altered surfaces that act as perfect barriers between the titanium and blood. Their teams conducted experiments showing very low levels of platelet adhesion, a biological process that leads to blood clotting and eventual rejection of a foreign material.A “phobic” material that repels blood might seem counterintuitive, the researchers said, as biomedical scientists often use materials “philic” (with affinity) to blood to make them biologically compatible.“What we are doing is the exact opposite,” Kota said. “We are taking a material that blood hates to come in contact with, in order to make it compatible with blood.” The key innovation is that the surface is so repellent, that blood is tricked into believing there is virtually no foreign material there at all.The undesirable interaction of blood with foreign materials is an ongoing problem in medical research, Popat said. Over time, stents can form clots and obstructions and lead to heart attacks or embolisms.Often patients need blood-thinning medications for the rest of their lives, and the drugs aren’t foolproof.“The reason blood clots is because it finds cells in the blood to go to and attach,” Popat said. “Normally, blood flows in vessels. If we can design materials where blood barely contacts the surface, there is virtually no chance of clotting, which requires a coordinated set of events. Here, we’re targeting the prevention of the first set of events.”The researchers analyzed variations of titanium surfaces, including different textures and chemistries and they compared the extent of platelet adhesion and activation. Fluorinated nanotubes offered the best protection against clotting, and the team plans to conduct follow-up experiments.Growing a surface and testing it in the lab is only the beginning, the researchers say. They want to continue examining other clotting factors and eventually to test real medical devices.