The Taub Center warned that diabetes from obesity – even in childhood – is one of the country’s major health problems. 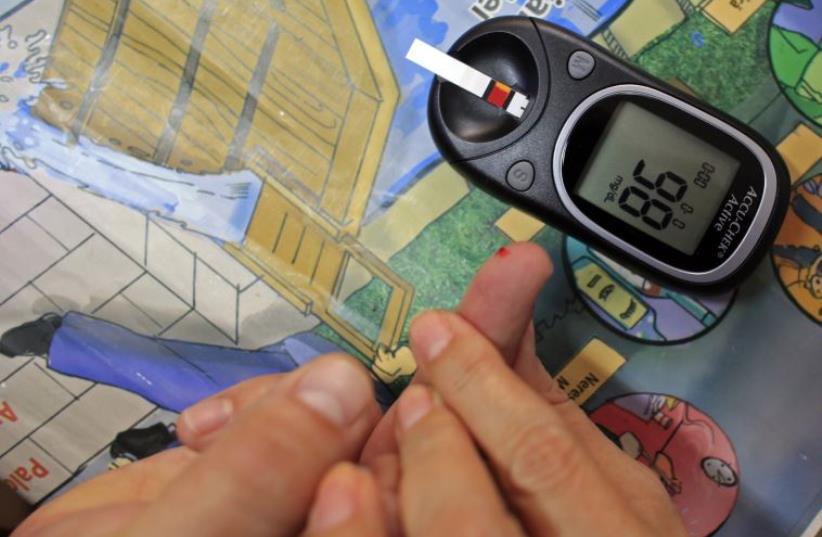 A diabetes blood sugar test
(photo credit: REUTERS)
Advertisement
The Health Ministry and a nutrition-based group reacted angrily to threats by the Israel Chambers of Commerce that manufacturers will raise prices if “red ministry” labels are put on processed foods to warn of excess sugar, salt or fat.“We reject these arguments and threats to raise prices,” the ministry said. “The recommendations of our committee for improved nutrition set down its recommendations after hearing all the arguments of all relevant sides. The implementation of the recommendations should not influence the prices of products with red [warning] labels,” the ministry said. “There is much economic value to promoting healthy lifestyles and avoiding the consumption of harmful food.”Meanwhile, diabetes specialist Prof. Itamar Raz, a member of the committee that made the recommendations and who chairs the Israel National Diabetes Council, said the threat to raise prices “testifies to the Chambers of Commerce’s distance from the public, its cynicism and populism.”Raz, who is active in several organizations that promote a healthy life, added that just this week the Taub Center warned that diabetes from obesity – even in childhood – is one of the country’s major health problems. The illness is linked to kidney and heart disease, such as hypertension, he added, and the excessive consumption of sugar, salt and fat can cause great harm. Thus warning labels on food products are important.But even labels will not be enough to bring a turnabout in the nutrition of Israelis, he said. Information campaigns, education and other means are also necessary. “In 2017, we expect companies to show social responsibility and take efforts to improve the quality of their food products to create a healthier public. All they want to do is to scare the government and delay the labeling. The Chambers of Commerce should join the effort rather than fight it,” he said.