Free app instructs how to give CPR, calls for help

The trigger for the free app was when a friend of Benny Zviran, who initiated the idea, died of cardiac arrest during a trek on foot in the Jerusalem hills four years ago. 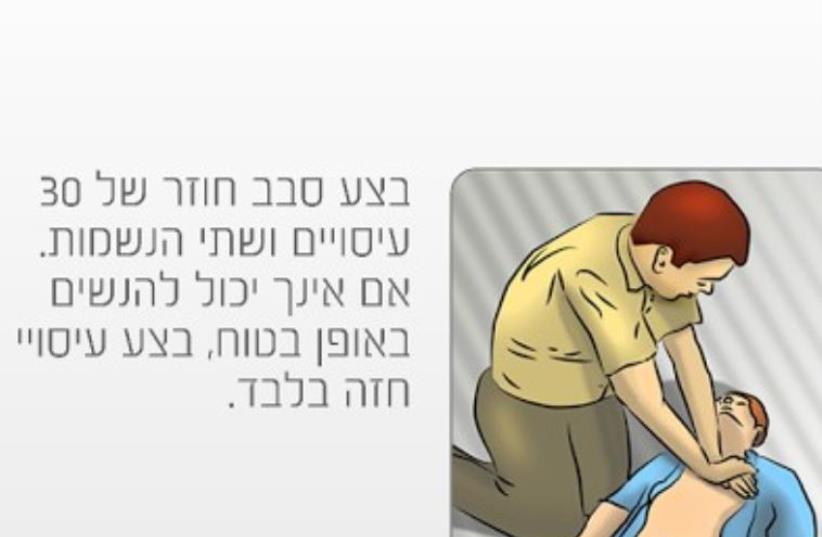 CPR app for smartphone.
(photo credit: COURTESY UNITED HATZALAH)
Advertisement
A new smartphone application in Hebrew that gives real-time instructions how to carry out cardiopulmonary resuscitation has been made available this week by the United Hatzalah organization and the ESC BAZ company.The trigger for the free app was when a friend of Benny Zviran, who initiated the idea, died of cardiac arrest during a trek on foot in the Jerusalem hills four years ago.“We didn’t know what to do. My friend just died in my arms,” he recalled.A few months later, another friend suffered cardiac arrest, but this time he was saved by medics and paramedics from Hatzalah who arrived within a few minutes on their ambucycles. “They gave him an electric shock to the heart with their defibrillator, and he came back to life,” said Zviran, who whose ESC BAZ company deals with the development of electronic optics for security uses.United Hatzalah president Eli Beer explained that the app shortens the time between the medical event and the giving of first aid. “Users can help someone who loses consciousness by giving first aid from the first moment, until the ambucycle or ambulance arrives,” he said.The application provides step-by-step instruction, using a human voice, for emergency CPR. There is an integrated emergency button that allows for the immediate dispatch of Hatzalah emergency medical services to your location based on real-time data from your phone, as well as for direct contact with emergency dispatch for further instruction.It also gives instructions on using a defibrillator if one is available on the site.In a few months, the smartphone app will be translated into English, French, Spanish and Russian, and a feature detailing how to resuscitate babies will be added as well.The Agus family in New York donated some of the NIS 500,000 for the app’s development.It can be downloaded in Israel by anyone over the age of 17 from www.ez-cpr.com. It is suitable for use on Android and Apple smartphones.
Sign up for the Health & Wellness newsletter >>