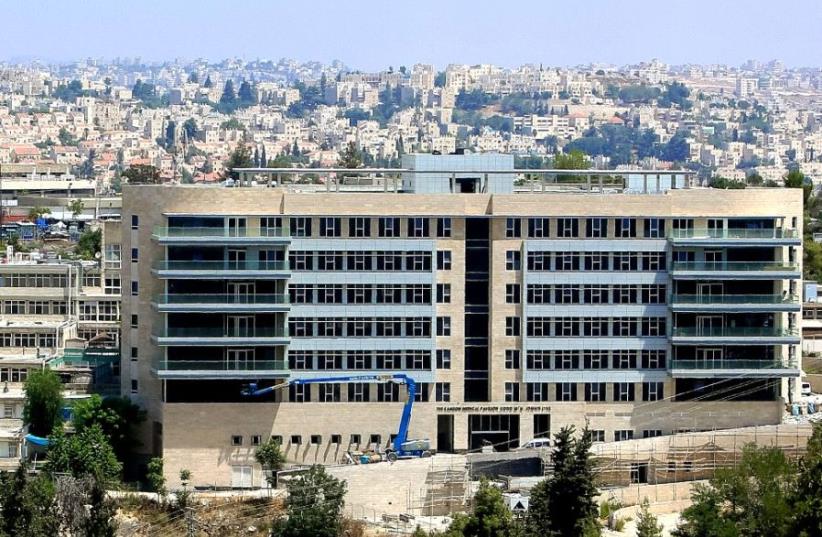 Herzog Hospital
(photo credit: COURTESY OF DR YEHEZKEL CAINE/HERZOG HOSPITAL)
Advertisement
A large medical pavilion at Herzog Memorial Hospital was dedicated on Tuesday and will provide relief to the severe shortage of geriatric beds in Jerusalem – but it’s no thanks to the Health Ministry or the Jerusalem Municipality, neither of which contributed any money to the project, despite their constant talk about the need for it.Named for two major donors to the hospital, Dr. Heinz Samson and his wife, Edith, the facility is opening only four departments, considerably fewer than the 270 beds it was supposed to house. With no state or municipal funding, hospital director- general Dr. Yehezkel Caine and his staff have been able to raise only NIS 150 million of the total NIS 300m. that it would cost to open the other departments. There is a long waiting list of elderly patients for admission to the facility.The hospital, which was the first psychiatric hospital in the Middle East when it was founded as Ezrat Nashim in Jerusalem’s Old City in 1894, later moved to Romema, opposite the central bus station, and then to its current premises in the neighborhood of Givat Shaul.Although recognized as a psychiatric facility for geriatric patients, it also cares for disabled children: the first department to move into the new building will offer care for children and teenagers who are permanently attached to respirators due to severe medical problems. The department for adults connected to ventilators will follow, along with an imaging facility and then a synagogue.The departments that lack funds for equipping them will open if further funding is provided by the state or donations.Although the Health Ministry and Jerusalem Municipality did not contribute to building or equipping the much-needed geriatric facility, the management nevertheless invited Health Minister Ya’acov Litzman and Mayor Nir Barkat to the event. Litzman acknowledged that his ministry is not on the list of donors, but blamed the deficiency on difficulties in evacuating an outdated geriatric facility for Holocaust survivors in Rishon Lezion. But Shamai Keinan, chairman of the hospital’s board, said: “We have no friends association and no financial support from the state. I don’t see any connection to the Rishon Lezion problem.”Keinan noted that even if it gets more money, a serious shortage of professional staffers – physicians specializing in geriatric care and psychiatrists, nurses and auxiliary staff – limits the admittance of more patients. “Just building beds won’t solve the problem. This a problem for the government to solve,” Keinan added.Barkat praised the hospital for treating “the weakest links in Israeli society” but did not pledge financial help. He added that it will bring more jobs and a higher quality of life to the capital, which is marking the 50th anniversary of its reunification next week.
Sign up for the Health & Wellness newsletter >>