Contrary to common belief, most plants are not cholesterol-free. 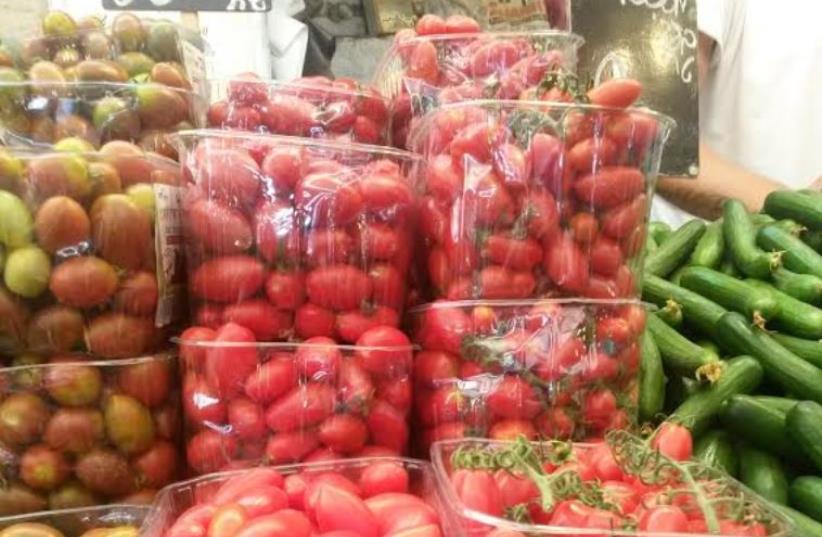 Vegetables: cucumbers and tomatoes
(photo credit: AMY SPIRO)
Advertisement
Many people eat green vegetables to lower their cholesterol levels, but contrary to common belief, most plants are not cholesterol-free. As reported recently in Nature Plants, researchers at the Weizmann Institute of Science have now deciphered the biochemical reactions responsible for the plants’ cholesterol production. These findings may make it possible to engineer plant species so as to obtain biochemical compounds that are derived from cholesterol.The blood fat has a bad rap for its role in heart disease, but humans can’t live without cholesterol, and it is the starting chemical for thousands of compounds – including drugs and substances important for human health. Cholesterol is essential for the proper working of brain cells and a host of other vital cellular functions in the human body. In plants, cholesterol molecules provide crucial building blocks for cellular membranes and for the protective layer on the leaf surface.“Cholesterol levels in plants are on a different scale than those in, say, shrimp – in fact, they are hundreds or even thousands of times lower than in animals – but they are not negligible,” says Prof. Asaph Aharoni of the Weizmann Institute of Science’s plant and environmental sciences department. Butter, for example, contains two to five grams of cholesterol per kilogram, and egg yolk – some 15 grams per kilogram. In soybean oil, cholesterol levels are 29 milligrams per kilogram – relatively high for a plant product, but still thousands of times lower than in butter; in coconut oil, they amount to just 14 milligrams per kilogram.It has been more than 200 years since French chemists discovered cholesterol in human gallstones, and more than 50 years since the details of cholesterol production were revealed in animals, but how cholesterol is made in plants has been unknown. In the new study, postdoctoral fellow Dr. Prashant Sonawane and other members of Aharoni’s team focused on the tomato, which contains about 0.3 to 0.5 milligrams of cholesterol per kilogram of plant tissue.The scientists first identified the genes potentially involved in cholesterol production by performing a large-scale analysis of gene expression and correlating the findings with the accumulation patterns of various compounds in the plant tissue. The researchers then determined the function of these genes by silencing them one by one. In additional experiments, they confirmed the function of the genes by incorporating them into mutant yeast cells lacking a particular enzyme and checking whether the enzyme’s activity had been restored.Finally, they managed to reveal the entire pathway of cholesterol production in plants. It turned out to proceed in 10 steps involving 12 enzymes – the same ones as in animals, although the intermediate molecules created at each step differ from those in animals. Next, in a tour de force of genetic engineering, the scientists introduced the genes for 11 of these enzymes into a model plant, Arabidopsis, which naturally produces very little cholesterol.“We used an innovative synthetic biology technique for ‘stitching’ these genes together, to create a metabolic caravan of sorts,” said Aharoni. Although the engineered plants grew to be smaller than usual, apparently because the manipulation interfered with their development, they made impressive quantities of cholesterol: 15 times more than normal.This method may in the future help in the manufacture of a host of valuable cholesterol-based chemicals. These may include the sex hormone progesterone, used mainly in hormone replacement therapy, and other steroid hormones, as well as glycoalkaloids – the subject of intensive research in Aharoni’s lab – that are known to have anti-cancer properties.Yet another prized substance is vitamin D. The Weizmann study revealed that the biochemical forerunner of this vitamin is synthesized at the next-to-the-last step of cholesterol production in plants.“In the future we may be able to block this last step, causing large quantities of the forerunner molecule, called pro-vitamin D, to accumulate in the plant,” concluded Sonawane. “This substance could then be purified from the plant. Alternatively, people may include pro-vitamin- D-rich plants in their diet, to help their bodies overcome deficiencies of this valuable vitamin.”ETHIOPIAN JEWISH STUDENTS ELIGIBLE FOR SCHOLARSHIPS IN BEGIN’S MEMORY
A fund for scholarships provided to science students of Ethiopian origin by the Science, Technology and Space Ministry has been named in memory of prime minister Menachem Begin on the 25th anniversary of his death. Minister Ofir Akunis, who reveres Begin and has an open book by the late prime minister open on his office desk, said the matriculation rate of students of Ethiopian origin is low. Begin called for Ethiopian Jewish aliya when he became premier and believed in giving equal chances to them in their studies and work.The scholarships will be worth NIS 1.8 million overall and will cover the cost of getting bachelor’s degrees (up to NIS 15,000 per student), master’s degrees (up to NIS 50,000 per student), doctorates (up to NIS 80,000 per student) and post-doctoral fellowships (up to NIS 100,000 per student).