Pick the minds of researchers during 'Night of the Scientists'

“Brain hats” will be colored by children at the Weizmann Institute of Science in Rehovot, while clay models of the brain will be built. 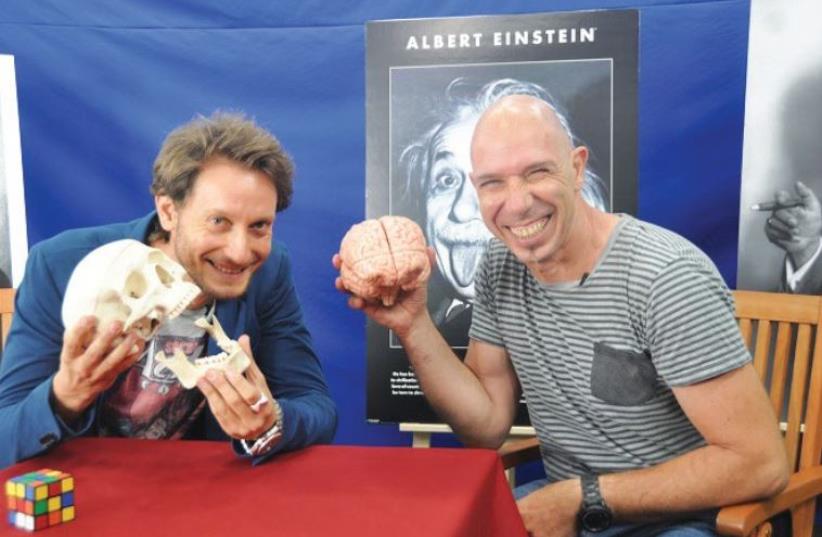 A MAIN EVENT of the evening is the ‘brain experiment’ to be held by Tel Aviv University neuroscientist Dr. Ricardo Tarrasch (right) and ‘artist of the senses’ Lior Suchard
(photo credit: SCIENCE, TECHNOLOGY AND SPACE MINISTRY)
Advertisement
For the 10th year in a row, members of the general public of all ages are invited to participate in free activities on the “Night of the Scientists,” with events running from 5 p.m. through midnight Monday on university campuses, research institutes and science museums around the country.Organized by the Science, Technology and Space Ministry together with the European Community, the event will highlight brain sciences. How does the brain function? How are feelings created? Can one read minds or erase or “plant” thoughts in someone’s mind? These are some of the questions that will be answered.Adults and children are invited to tour labs, meet scientists, hear lectures, view demonstrations and participate in workshops. Science, Technology and Space Minister Ophir Akunis called on all who are interested to “get a taste of the beauty in science and of scientific research as part of an experiential activity for all the family.”A main event will be a major “brain experiment” to be held by Tel Aviv University cognitive neuroscientist Dr. Ricardo Tarrasch and “artist of the senses” Lior Suchard, using an experimental film to determine how much we pay attention to details around us. The results of the experiment will be made public during the evening.Visitors will be invited to learn about “reading minds” and “erasing thoughts,” and also about the building of artificial intelligence machines.Other events will be at Haifa’s National Science Museum, where visitors will be able to test their senses, view Brainpop films on the brain and the rest of the nervous system, and meet with scientists.At Jerusalem’s Bloomfield Science Museum, participants will be able to “tour” the various parts of the brain, build a unique optical illusion, participate in “speed dating” with scientists and learn to help the vision-impaired “see” with sound.At the University of Haifa, one will be able to operate a driving simulator and take part in laughing and yoga workshops.The Open University in Ra’anana will make it possible to sense how people with disabilities feel every day, and watch a “mental mathematics” act.“Brain hats” will be colored by children at the Weizmann Institute of Science in Rehovot, while clay models of the brain will be built.