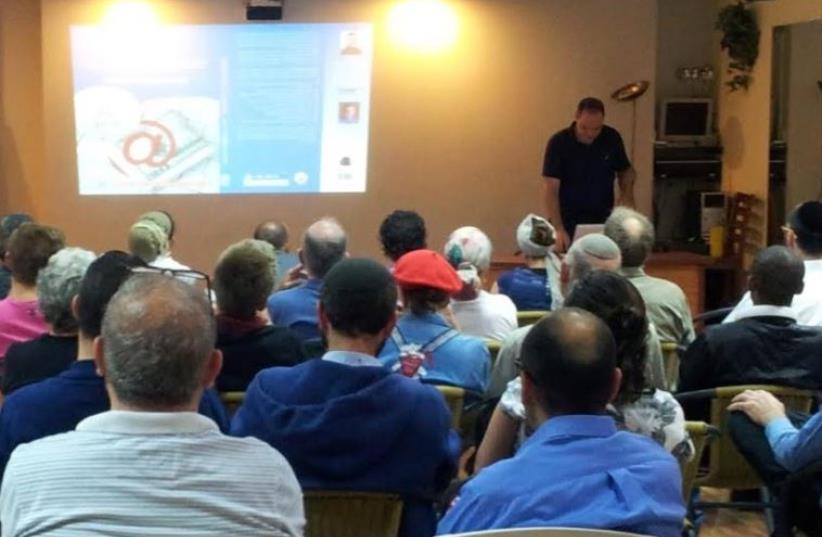 Entrepreneurs attend a seminar provided by MATI – The Jerusalem Business Development Center.
(photo credit: MATI)
Advertisement
Against the backdrop of a terrorism wave that has partially paralyzed Jerusalem’s already languishing economy, one not-for-profit agency dedicated to entrepreneurs is helping defy the odds, and bolstering the dreams for thousands of olim and Sabras alike.Supported by the Jerusalem Municipality, the Jerusalem Foundation, Ministry of Immigration and Absorption and numerous private donors, MATI – The Jerusalem Business Development Center, is training entrepreneurs to realize their visions.Founded in 1991 to help immigrants from the former Soviet Union establish businesses in Jerusalem, MATI’s CEO Golan Tobi said on Wednesday that the organization has since expanded to aid a cross section of the capital’s burgeoning and existing entrepreneurs.“Since the establishment of MATI, 46,962 entrepreneurs applied for business consultations, and approximately 12,900 new and expanding businesses were assisted,” said Tobi.With a full-time staff of 20, buttressed by 120 lecturers and business consultants, Tobi said that over the past year, 3,375 entrepreneurs and business owners used services provided by MATI, which procured 300 loans valued at a total of NIS 55 million.“In the beginning, we only helped new immigrants, but after a few years we thought: ‘Why don’t we help all of the other populations in Jerusalem?’” he said. “Now, about 70 percent of our applicants are new entrepreneurs and 30% are existing business owners.”Among the thousands of entrepreneurs who received help, Tobi noted that approximately 800 are Arabs from east Jerusalem, hoping to create a spectrum of businesses – ranging from bakeries, transportation services, cosmetics shops, and gift and clothing stores.The majority of applicants, however, are olim, primarily from the US.“We have a special department for new immigrants with help from the Ministry of Immigration and Absorption, offering free seminars and consultations with all services highly subsidized,” he said. “In Jerusalem it is very unique in that most people are from the US.”According to Tobi, 50% of applicants are from the US, 20% are from France, with the remaining participants hailing from Britain, Belgium, Russia, Ukraine and “all over the world.”And with highly subsidized rates, ranging between NIS 200 to NIS 900 for all courses – plus an additional NIS 50 for mentoring – MATI has been far more accessible to financially strapped participants hoping to live their dream in Israel.“There are about 300 people in the program now getting full services, with 90% of them living in Jerusalem,” said Tobi.Last year he said entrepreneurs and business owners participated in some 3,100 hours of mentoring and business consultations.“These figures reflect the recent growth trend in fund-raising assistance for the establishment and expansion of small and medium businesses in the city,” said Tobi, noting that 82 additional business training activities have recently been launched.Among MATI’s numerous success stories includes that of Ami Hizkiya, who made aliya from Los Angeles in 2007.Hizkiya, who lives in Kiryat Telz-Stone, just west of Jerusalem, said she and her husband first came to MATI in 2012, paying NIS 200 to take six months of courses, once a week, on how to start and manage an auto mechanics business.Although their initial business model failed, Hizkiya said the couple quickly regrouped to launch a now highly successful cleaning business.“They helped us with courses, and one-onone business mentoring, consultations and workshops,” she said. “They even offered us loans, but we didn’t need them.”In short order, Hizkiya said they launched My Cleaning Company, which now has a full-time staff of 13.“It’s been growing very nicely,” she said. “In the beginning our biggest challenge was not demand, but supply.”On a scale of 1 to 10 in terms of assistance, Hizkiya said she gives MATI a “12.”“I am tremendously grateful to MATI,” she said.“There are many people who went through [the program], and as you know, the odds of a new business failing in the first three years are high, so the fact that we not only survived, but succeeded, is due in part to MATI.”Moreover, Hizkiya said she is “grateful that there is such an organization out there.”“I recommend MATI to anybody who is even considering starting a business,” she said.Still, Hizkiya emphasized that foremost, she attributes her and her husband’s success to a far higher power.“But to be honest and fair, I believe all the credit goes to God,” she said.