The potential of the East

“The market of tomorrow is India and China and the rest of Asia.” 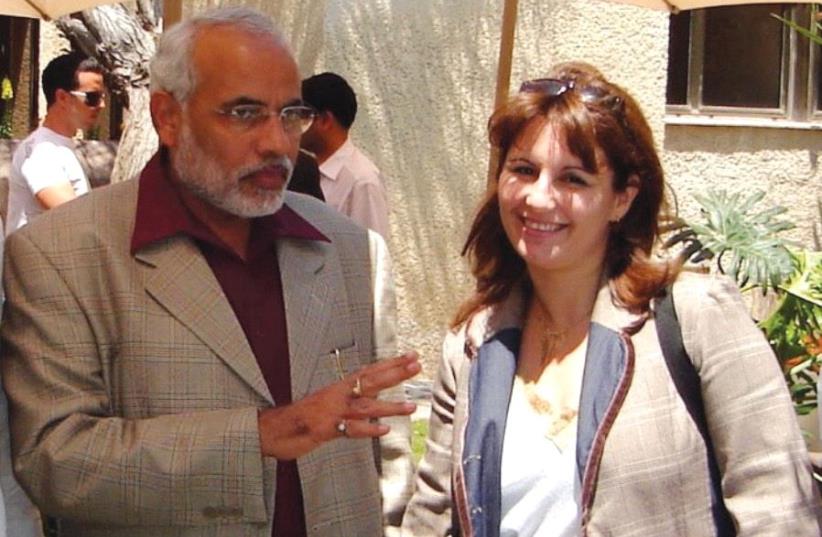 ANAT BERNSTEIN-REICH, head of the Israel-India Chamber of Commerce and managing director of A&G Partners, chats with Narendra Modi, then chief minister of Gujarat state, during his visit to Israel in 2006.
(photo credit: Courtesy)
Advertisement
With Indian Prime Minister Narendra Modi’s visit less than two weeks away, Israeli innovators are looking to benefit from a wide array of untapped partnership opportunities.“The Israeli business community is only right now starting to realize the potential of the East,” Anat Bernstein-Reich, chairwoman of the Israel-India Chamber of Commerce and managing director of A&G Partners, told The Jerusalem Post this week. “The market of tomorrow is India and China and the rest of Asia.”Although local innovators have begun to open their eyes to the East, the Israeli business mindset has all too long been focused on Western markets, Bernstein-Reich said. The high visibility of Modi’s visit could provide a much-needed boost in the business community’s awareness of mutually beneficial economic collaborations.“He is like a mega-star wherever he goes because of his charisma,” Bernstein-Reich said.After suffering for years from cumbersome bureaucracy and poor ethics, the Indian business environment has undergone significant changes, as Modi has introduced greater transparency, efficiency and widespread digitalization to the country’s operations, she explained.“The ease of doing business is much improving, and that’s why for me it’s important that Israelis will also understand the potential in India,” Bernstein-Reich said.While if given the option to buy a building in the United States or in India, most Israeli investors would still choose the US, returns in India would be much higher, she said.“We have to let go of our old conservativeness and look to the reality and see that there is potential here,” she said.A week after Modi’s visit, a group that includes representatives of some of the best private equity funds in India will also come to Israel, to raise capital, Bernstein-Rich added.“I hope that post-Modi’s visit, there will be more of an inclination to invest in Indian equity,” she said.All in all, trade between Israel and India in 2016 – excluding the information technology sector – amounted to approximately $4.2 billion – $1.77b. in imports from India to Israel, and $2.4b. in exports from Israel to India, according to the Central Bureau of Statistics.“There is large potential for growth in the trade, if we will sign a free trade agreement between us and India, which is another thing that we would like this visit to boost,” Bernstein-Reich said.Such an agreement, she explained, would reduce customs and ease a few processes, while also providing a financial protocol to protect investments in each country.Another way to encourage Israelis to do business in India, in Bernstein-Reich’s opinion, would be to optimize the activity of the Israeli state-owned company ASHRA – which provides trade insurance and guarantees for Israeli investment in many developing countries. While ASHRA is doing little in India at the moment, the company could establish funds or trade insurance dedicated to Israeli firms doing business in India, she said.Daniel Carmon, Israel’s ambassador in New Delhi, also emphasized that trade between Israel and India has the potential to reach much higher levels.“There’s always something to aspire to,” Carmon told the Post in a mid-May phone interview from India. “We always want to promote more trade between our countries, and I am talking about trade going both ways. For this, we need more incentives to do business in each other’s countries.”Carmon also praised Modi for implementing a number of reforms and mechanisms to ease doing business in India. Creating a smoother process of doing business has been a vision “very close to Prime Minister Modi’s heart,” the ambassador said.“The ease of doing business in India has improved,” Carmon said.On the Israeli side, he credited the relevant government ministries as well as the chambers of commerce for taking a more active interest in India. President Reuven Rivlin’s visit to India in November also upgraded the level of activity and showcased the potential of collaborative efforts, Carmon added.“Another very important element in this would be the connectivity between both countries – on the one hand knowing each other better than we do, and on the other hand, facilitating travel between one country and the other, especially in the field of aerial transportation,” the ambassador said. “We only have to hope that the announced opening of an Air India flight from Delhi to Tel Aviv will materialize soon and will also bring developed connectivity between our two countries.”While Air India had planned to operate three weekly round-trip flights between New Delhi and Tel Aviv beginning in May, the carrier suspended its plans after failing to receive permission from several Arab and Muslim nations to fly through their airspace, which would have made the route uneconomical.Such a route would grant entrepreneurs direct access not only to India’s capital, New Delhi, but also to the eastern portions of the country that are often neglected by Israeli investors, Bernstein-Reich said.“It would definitely make our lives easier,” she added. “At the moment, to reach Delhi, it’s a nightmare. We use connections via Turkey and Europe and so on. It would reduce the prices, which are sometimes crazy on this route.”Those additional flights would also enable Israel to attract more Indian tourists, who tend to be spiritual and appreciative of the holy sites in the country, Bernstein-Reich said.Another key strategy toward bolstering economic ties between the two countries would involve building academic partnerships and seeing more Indian students studying in Israel, Carmon said. Today, he explained, most Israel-India partnerships come out of “the ecosystem of Start-Up India and Start-Up Nation in Israel,” he said.