The hipster pièce de résistance, however, is the stairwells – each floor is filled with deliberate graffiti from some of Tel Aviv’s better-known street artists. 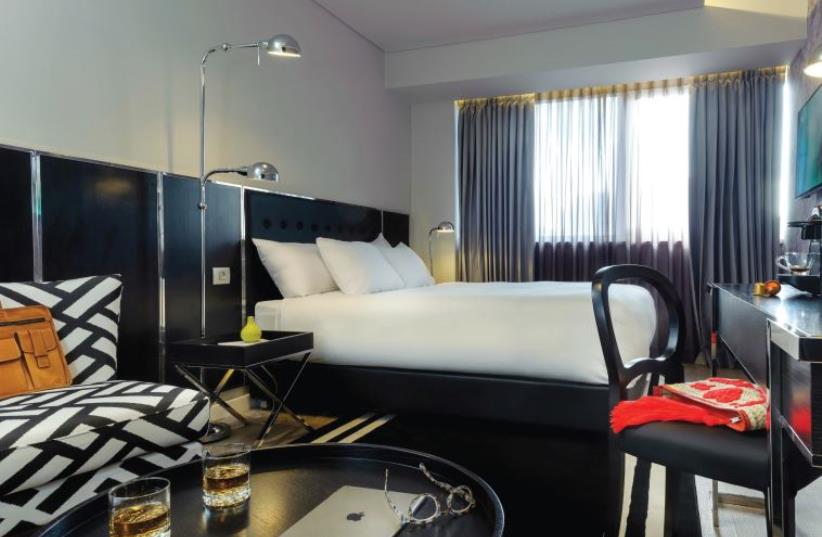 EACH FLOOR is filled with deliberate graffiti from some of Tel Aviv’s better-known street artists.
(photo credit: BRIAN BLUM)
Advertisement
How did a nice hotel like NYX find itself in a neighborhood like this, far from the sea and adjacent to a huge construction site for Tel Aviv’s planned light rail? The Fattal chain is wagering that in a few years’ time when the light rail is done, the location of its latest urban concept hotel will become a hi-tech hub and NYX will be well positioned as a favorite of local entrepreneurs and their venture capitalist pals.Indeed, the hotel, which is located just a short drive from the Ayalon Highway in the southeast of the city, already has enough going on inside to make it a start-up destination in its own right.The breakfast room on the ground floor doubles as a pick-up bar at night with its own DJ. On the rooftop is a chill-out lounge with another bar, soft couches and even an outdoor shower. (If you squint and it’s a clear day, you might even see the ocean.) The main restaurant, which wasn’t open for business yet when we visited, will be run by Haim Tibi, the chef behind the gourmet Muscat dining room at the Mitzpe HaYamim spa near Rosh Pina.The designers behind NYX have tried very hard to create a big-city hipster vibe. Some of the floors have free vintage arcade games in the hallways (think Pac- Man and Donkey Kong). The lighting is subdued with dark, vaguely psychedelic wallpaper and upbeat music piped in at all hours.The hipster pièce de résistance, however, is the stairwells – each floor is filled with deliberate graffiti from some of Tel Aviv’s better-known street artists.The flamboyant drawings will have you ditching the elevator, a health-conscious bonus.And what’s a hipster without his or her small pooch? NYX may be the first hotel in Tel Aviv to cater proactively to dog owners. Several of the rooms in the tenfloor building are pet friendly, complete with a compact doggie bed. You can even buy goodies for your dog in the vending machine… next to the beer and soda.With 180 rooms, NYX is not exactly a boutique hotel like Fattal’s other recent Tel Aviv launch, the Rothschild 22, nor are the rooms as well appointed (although they are quite large by European and Israeli standards). Every room includes free Wi-Fi, a big LCD television screen and a Nespresso coffee maker.There are still some kinks to work out – the air conditioning can take 10 to 15 minutes to cool off the room, which can make for some sticky moments on a hot Tel Aviv afternoon.The building in which NYX is located was formerly the offices of an insurance company, although the entire building has been renovated so there’s no hint of its paper-pushing past. Fattal hired architect Ari Shaltiel to design the hotel and spent NIS 80 million on the re-do.The location may seem off the beaten track, but it’s just a 15-minute walk to the southern end of Rothschild, to funky Florentine or, in the other direction, to Sarona, with its endless shops and restaurants.NYX is named after the Greek goddess of the night (although comparisons to New York City are welcome, too). The vibe and amenities, not to mention reasonable price (under NIS 750 for a standard room) make NYX a solid new entry to Tel Aviv’s ever-burgeoning business hospitality scene.The writer was a guest of the hotel.