Steinitz encourages Eni to invest in Karish and Tanin

Netanyahu: "I see great importance in cooperation with Italy also in the field of energy." 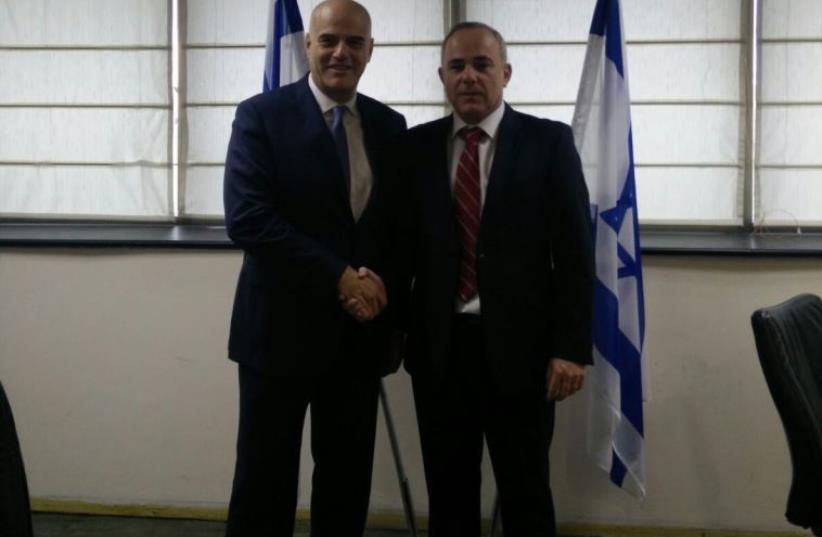 Energy and Water Minister Yuval Steinitz and Eni CEO Claudio Descalzi meeting Thursday at the Energy Ministry in Jerusalem
(photo credit: COURTESY NATIONAL INFRASTRUCTURES, ENERGY AND WATER MINISTERY)
Advertisement
In a meeting with the CEO of Italian energy giant Eni in Jerusalem on Thursday, National Infrastructure, Energy and Water Minister Yuval Steinitz suggested that the firm consider investing in two yetto- be-developed Israeli gas reservoirs, Karish and Tanin.Steinitz, and later Prime Minister Benjamin Netanyahu, met with Eni CEO Claudio Descalzi, to discuss various opportunities available in the Israeli gas sector. The energy minister also encouraged the Italian firm to weigh the idea of exploring for new reservoirs in Israel’s economic waters, according to his office.Assuming Israel’s disputed natural gas outline – a long negotiated settlement between the government and the country’s gas companies – is implemented, the Delek Group and Noble Energy will be required to sell the Karish and Tanin reservoirs to a third party.Netanyahu, who met with Descalzi after the CEO’s visit to the Energy Ministry, likewise discussed the potential for further discovery in Israel’s waters and the Italian firm’s possible role in such ventures.“As part of the growing strategic cooperation between Israel and Italy in a variety of fields, I see great importance in cooperation with Italy also in the field of energy,” the prime minister said.While Eni is not yet involved in the Israeli gas sector, the company is no stranger to eastern Mediterranean hydrocarbons.Last month, the Italian firm announced that it had identified the Mediterranean’s largest known gas field off the Egyptian coast, the 849-billion-cubic-meter Zohr field. If the estimates prove correct, the field would be significantly larger than the approximately 621 b.cu.m. Leviathan, Israel’s biggest basin.At the first meeting on Thursday hosted by Steinitz, Energy Ministry director-general Shaul Meridor presented Eni executives with estimates of the potential for discovery of large natural gas fields in Israel’s economic waters, as well as the advantages of regional cooperation, the ministry said. The meeting participants discussed the regional gas markets, as well as possibilities to connect gas discoveries in Israel, Egypt and Cyprus for potential joint export to the Western European market, the ministry added.In the discussions that followed with Netanyahu, which also included Steinitz, National Security Council head Yossi Cohen and Prime Minister’s Office director- general Eli Groner, the prime minister and Descalzi spoke of the latest developments in the eastern Mediterranean, including Eni’s new Egyptian discovery. Netanyahu and Descalzi also addressed the future development of gas fields in Israel’s economic waters, the Prime Minster’s Office said.The two agreed that in light of the growing demand for natural gas in the region – and in order to promote the common interests of the region’s government’s and companies – parties involved in the sector must explore further possibilities for cooperation, according to the Prime Minister’s Office.During the meeting, Descalzi stressed the importance of synergistic natural gas development in the eastern Mediterranean, statements from both the Prime Minister’s Office and Eni confirmed.“By sharing future resources as well as export and transportation infrastructures of Israel, Cyprus and Egypt, the area could become a regional gas hub able to also provide an important contribution to the European energy security,” a statement from Eni said after the meetings.Descalzi’s Jerusalem visit follows up on previous meetings he has recently conducted in the region, including one with Egyptian President Abdel Fattah Al-Sisi on October 19 in Cairo, and another with Cypriot President Nicos Anastasiades on September 10 in Nicosia, the company added.Steinitz told The Jerusalem Post on Monday that Eni’s upcoming visit might be “further testimony that international energy companies are interested in Israel.”“It’s quite clear that there might be very close cooperation between Israel, Egypt, Cyprus, Jordan and, maybe also in the future, Greece and Turkey,” he said. “If you want to be part of it, you have to be involved also somehow in Israel.”