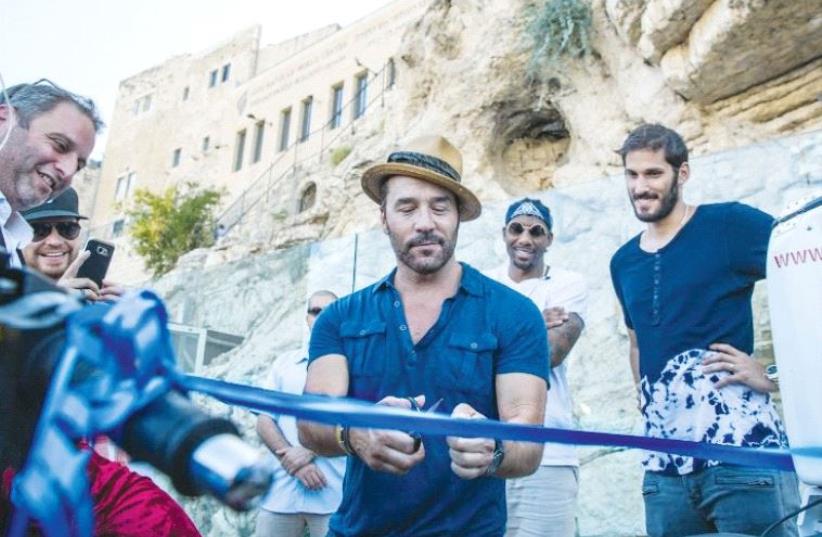 Jeremy Piven
(photo credit: UNITED HATZALAH‏)
Advertisement
1. Informal Relief French Ambassador Patrick Maisonnave is accustomed to posing for photos at formal gatherings, where naturally, he dresses elegantly. He often hosts events with a Parisian flair, wearing a tie as usual. Despite the dress code demanded of him, the ambassador was recently caught on camera during an afternoon outing with his daughter at an air-conditioned mall in the center of Tel Aviv. While shopping, Maisonnave sported a T-shirt and shorts, a way of handling the heat of Israel’s summers, of course.2. Aiding Syria’s Wounded Togo President Faure Gnassingbe is visiting Israel in these days with ministers from his administration and Israel’s ambassador to the Ivory Coast, Isi Yanouka. Gnassingbe and his entourage traveled north last week to Safed where they visited Ziv Medical Center. The general director of the center, Dr. Salman Zarka, hosted the group as they learned about the hospital’s activities and humanitarian efforts to care for wounded civilians from Syria’s civil war. Gnassingbe met two Syrian patients who are hospitalized in the Orthopedic Unit. They told the president about the horrors they underwent in the war-torn country.3. Easing The Burden The Hakav Hameached foundation, headed by Yisrael and Chaya Scheinfeld, invited 600 sick children last Wednesday to a summer activity at the Ramat Gan Safari. In between viewing animals and gift giving, there were performances by Yuval Hamebulbal (“Yuval The Confused”), Adi Bity, stand-up comedian Eyal Eltawi and others. The entertainers performed voluntarily and all enjoyed the catering services of Liliyot restaurant and chef Yonatan Berrebi. Ramat Gan Mayor Yisrael Zinger, his deputy Tzahi Zalicha and Tel Aviv Chief Rabbi Yisrael Meir Lau were on hand to applaud the foundation’s work.4. Special Donation United Hatzalah – an organization of first responders – recently received a special donation, thanks to Hollywood actor Jeremy Piven. The star of Entourage arrived last week for a visit to the Holy Land with a delegation of American athletes invited by Israeli NBA player Omri Casspi. During the visit, Piven celebrated his second bar mitzva at Jerusalem’s Western Wall. At the end of the event, former NBA player Amar’e Stoudemire, philanthropist Israel Schechter and sports agent Dave Osokow told the 51-year-old actor that they donated an OfnoLans (ambulance motorcycle or “ambucycle”) in his name to the organization as his bar mitzva gift. An excited Piven cut the ribbon in the presence of Dov Maisel, director of international operations at United Hatzalah.5. Business Leadership On the eve marking the end of Birthright Excel, Birthright’s young business leadership program was held at the Peres Center for Peace in Jaffa. With the internships of 60 honor students complete – students hailing from the US, Canada and Mexico – each participant was assigned to a business leader in his or her country of origin who is active with the Jewish community and Israel. The leaders will act as the students’ personal guides and mentors. Those who attended the event included director-general of the Prime Minister’s Office, Eli Groner; the CEO of Birthright, Gidi Mark; Yoram Tietz, chairman of Birthright Excel in Israel and a managing partner at EY Israel; Inbal Arieli, vice president of strategic partnerships at Start-Up Nation Central; Ifat Bechor, manager of Birthright Excel; and many other leading executives.Translated by Sharon Aharoni.