Real estate expert Joanna Stromze explores the streets of Tel Aviv while discovering the best deals the White City has to offer.

By JOANNA STROMZE
DECEMBER 8, 2011 16:32
Zamenhof Street 311
(photo credit: Joanna Stromze )
Advertisement
Central Tel Aviv boasts a history going all the way back to the 1930s, where the past and the present blend seamlessly. Preserved and renovated international style Bauhaus buildings stand along original ones. Whilst Tel Aviv is modernizing itself with high rise, modern office towers, top of the line hotels and skyscrapers, the authenticity and charm of Tel Aviv lies in its many side streets, each with its own history and story to tell.History 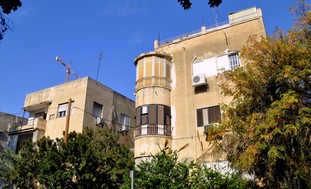 (Joanna Stromze )Ludwig Lazarus Zamenhof was the inventor of Esperanto, the most successful constructed language designed for international communication; hundreds of city streets, parks, and bridges worldwide have been named after Zamenhof and in the very heart of center Tel Aviv, a street is named in his honor.The street's landmark is the notorious Zamenhof Health Clinic; built between 1934 and 1936 according to the principles of the International style Bauhaus architecture. The Zamenhof clinic was considered to be one of the most important clinics in Tel Aviv and in Israel and provided different professional medical services. After decades, the structure became obsolete despite the on-going maintenance and being situated in the heart of a residential area, with narrow streets and difficulty in parking areas, the management of the clinic came to a decision in selling the property. The complex is considered as a medium preserved building by the Tel Aviv municipality and today it is privately owned and is due to become a residential complex.  Location 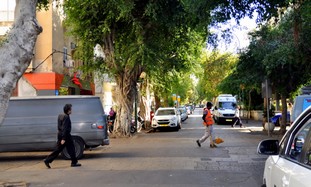 (Joanna Stromze )Discretely tucked away in Tel Aviv's hub, just on Dizengoff Square in between two marvelous Bauhaus buildings is where Zamenhof Street begins. The street is relatively wide; however towards the very end of Zamenhof, it turns into a lovely intimate pedestrian passage connecting Zamenhof to tree-lined Sderot Chen. Zamenhof crosses Shlomo HaMelech and King George, yet it remains a quiet and serene street with easy access to some of Tel Aviv's best attractions and locations. ArchitectureZamenhof Street faithfully represents the "White City" with its many International Style buildings. Typical Bauhaus architecture can be noticed everywhere on Zamenhof; square or rounded balconies, white, clean cut design and low three story buildings along with 1950's and 60's architecture. The majority of the buildings on Zamenhof still remain untouched; this 1950s style architecture is known for its facade pillars, three to four floors high and massive stair cases. There are very few buildings on Zamenhof that were completely modernized and feature a completely contemporary architecture.
The residents of this charming street consist of young professionals, couples, families and senior residents. The location is fantastic and it's resident's enjoy close proximity to nearly every spot in Tel Aviv.     Real EstateReal Estate prices in the City Center are relatively high, with an average NIS 27,000 per square meter, where the average on Zamenhof Street reaches NIS 30,500 per square meter. The history, along with its serene yet center location, is what makes this White City gem attractive. An old-school, 90 square meter, two bedroom, one bathroom apartment, situated on the third floor in a building without an elevator with two balconies is currently available for sale for NIS 2.55 Million.A 140 square meter penthouse, with two 20 square meter roof top terraces in a renovated Bauhaus building, situated on the top floor with elevator and private parking attached is currently available for sale for NIS 5,500,000.In March of this year, a 79 square meter, two bedroom apartment on Zamenhof was sold for the price of NIS 2,060,000.In July of this year, an 82 square meter, two bedroom apartment on Zamenhof was sold for NIS 3,200,000.Rentals on Zamenhof are fairly average for central Tel Aviv; a thrid floor (no elevator) two bedroom, one bathroom renovated apartment was recently rented for NIS 6,000.
Advertisement
Subscribe for our daily newsletter