Joseph on the Nile

A new look at the biblical story. 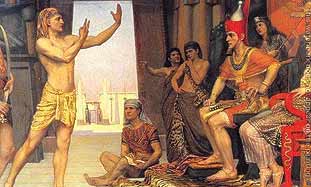 THERE CAN be little doubt that Joseph, during his service at Potiphar’s court, must have been well aware of such life-and-death aspects of Egyptian existence. His prophecy was the most plausible explanation of Pharaoh's dream, based both on his genius of deduction and practical experience, and so was the proposed solution: imposition of a 5% tax on the wheat, to be stored against famine during the seven years of plenty. The solution was so obvious that it was immediately understood not only by the Pharaoh, but by his entire court. A new tax was imposed, the granaries were widened, and Joseph became a national hero. He had predicted the unpredictable, and by marrying Assenath, daughter of the priest of On, had entered the highest ranks of Egyptian society.In this respect Joseph, the successful Egyptian treasury and grain administrator, was perhaps the first of the Jewish advisers to mighty kings; he certainly wasn’t the last. From Spain and the numerous princes of various German principalities to the Kingdom of Poland, the typically Jewish combination of vision and practical good sense won them wealth, protection and the right to settle for their less-fortunate brothers. But there was frequently a king who didn’t remember their contribution, became suspicious of strangers and had the Jews robbed and expelled. The ancient Egyptian writings quote many instances of Canaanite tribesor individuals crossing the Egyptian border for grain in a time offamine. The main northern road connecting Canaan and Egypt was usuallywell guarded. (Moses’s Hebrews escaped by a southern route). Egyptiantemples are frequently adorned by paintings of such “Asiatics” offeringgifts to Egyptian rulers. Slaves were bought, sold and hunted on bothsides of the border. Egypt had extradition treaties with its neighbors.But such Canaanite traders or tribes always returned home. It was alsoEgyptian policy for centuries to ward off all foreign invaders:Libyans, Hyksos, Philistines, the mighty People of the Sea defeated byRamses II. It was only natural for the ancient Hebrews to end theirEgyptian sojourn and return to their promised land