An angel called Gabriel: The priest who stands with the Jewish State

"What I want for my children and their children is that they will love God – and love the land of Israel," Naddaf says. 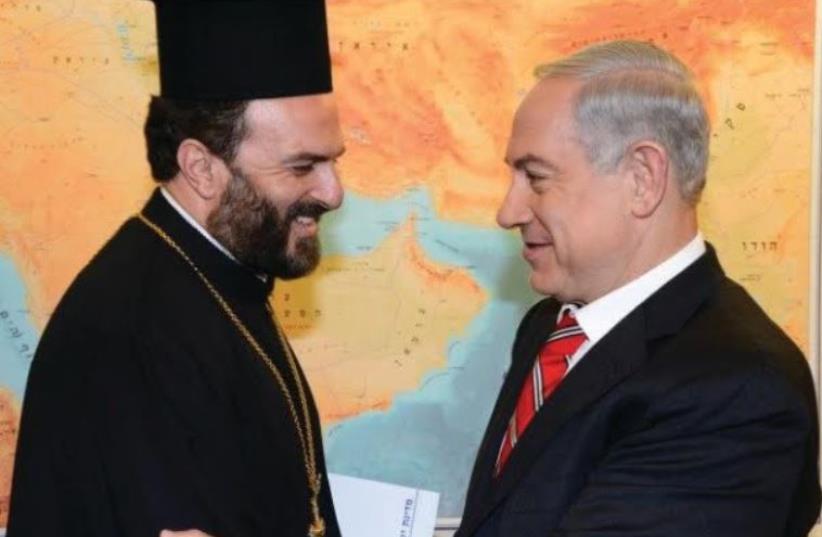 UnitedFather Naddaf’s office is decorated in shades of mahogany and blue. An Israeli flag occupies a place of honor. But the first thing that catches the eye is a giant poster adorning one of the walls, offering visitors a brief glimpse of what the Christian Empowerment Council stands for.Pictures of Christian IDF soldiers, saluting and running into action, a smiling Naddaf keeping watch over his flock and a silhouette of a cross fills the right side of the poster. To the left, a quote from Ze’ev Jabotinsky, a Revisionist Zionist, “From the wealth of our land there shall prosper; the Arab, the Christian, and the Jew.” And in the middle, joining the past with the present, the haunting words from Israel’s national anthem, “To be an independent people in our land, the Land of Zion and Jerusalem.”“I embrace Zionism, Jewish sovereignty in Israel, and the tolerance, respect and opportunity for all that have grown out of that sovereignty,” Naddaf wrote recently. “I believe that our youth – Christian youth – should fully integrate into Israeli society. Part and parcel of that integration includes serving in the IDF, Israel’s army.”“Israel offers all its citizens – Jewish, Arab, Christian, Druse, Bedouin and whoever else – the freedom to worship as we wish, to pursue our dreams, to travel, to love and to live in safety,” he explains.“We live in a country that offers us such benefits – is it not also our responsibility to help keep our home safe from those who would destroy it? Our Jewish brothers and sisters go to the army. So do the Druse and the Bedouins. It is also our duty to protect our country and our people.”That is what the Christian Recruitment Forum is all about. Established in 2012, the forum offers the youth of Naddaf’s flock the motivation, assistance and support on their journey of enlisting and serving in the IDF.Moreover, the forum also encourages young Christians who are unable to join the army to contribute and integrate in Israeli society through national service, such as volunteering in hospitals, schools and centers for the physically and mentally handicapped or in old age homes.The fruit of the forum’s efforts is clear. Three years ago, only 40 Christian soldiers served in the IDF. Figures for March 2015 show that the number has quadrupled to almost 110.

‘They came back as men’One of the young Christians proudly protecting Israel is Jubran, Naddaf’s oldest son, who enlisted in December 2014. “In only one year I have seen tremendous growth in my son,” the priest confides. “He takes responsibility, he cares, he helps, and he loves this land and its people from his heart.”Naddaf is not the only one singing the praises of the IDF for its positive impact on the lives of their sons. Sana Ashkar had no idea that her oldest son planned to join the army. She found out once he had already enlisted. “I was proud, of course,” she explains, “but it was difficult. He was my little boy.”When Ashkar’s youngest son turned 18, he decided to follow in his brother’s footsteps to enlist. “Things were not always easy for them,” she remembers, “but they are happy they did it. So am I. I sent the IDF my boys and they came back to me as men.”“You never know someone until you live with them,” she muses. “My sons call the Jews their brothers. And it is true. They lived together, served together and protected each other. There is now that bond.”Sari and Saher Matar agree. The two Christian brothers from Nazareth are both former IDF soldiers. Sari, 27, served in a primarily Bedouin unit and walked away with the award for most outstanding soldier in his unit every year.Saher, 22, joined the famous Golani infantry brigade. “I was the only Arab and the only Christian in my unit. But I was in the right place,” he explains. “I was with friends and brothers.”When Operation Protective Edge raged during the summer of 2014, young Saher went to Gaza to defend Israel alongside his Golani friends and brothers. “I protected them and they protected me. We felt safe knowing we had each other’s backs.”“I encourage many young people to join the IDF,” he says. “I tell them how good it is to be part of the army and to be part of this country. It is very important to me to show my loyalty to my country.”Naddaf’s call for the youth of his flock to enlist goes beyond the realization of a shared duty. Israel’s Christians, he believes, should take their place as patriotic citizens, integrating into the society to participate and celebrate the rights and responsibilities of this vibrant democratic state.“As Christian citizens of this land, we do not only want to take – that is not our way. We also want to give. By joining the army, we are telling our Jewish brothers and sisters that the Christian community is willing to stand with them, to protect with them and one day, enjoy peace with them.”The IDF, Naddaf told a local media outlet, is the “melting pot” of Israeli society, and thus “the ticket” to full integration into that society.But integration, he assures, does not mean a loss of identity. In fact, the Christian priest has been instrumental in forging a new, non-Arab identity for his flock.“My people have mistakenly been called “Christian Arabs,” he wrote recently, “but the reality is that we are Arameans – descendants of people who lived here in Israel since biblical times.”Following a public campaign, the Interior Ministry recognized the Arabic-speaking Christians of Israel as Aramean, as opposed to Arab or Palestinian.“It is like returning home,” Naddaf confesses. “We are coming back to our roots, once again speaking our own language, Aramaic. We are learning about our ancestors, who lived in this land some 2,000 years ago – long before the Arabs came.”The recognition of an ancient identity spanning more than two millennia also reinforces an important link, Naddaf says. “Christians have a bond with the Jews,” he said recently. “We have an allegiance with the Jewish people; with the Muslims we are neighbors. There is no covenant there.”

UnafraidFor Naddaf, the past four years in the limelight came with its own blessings and burdens. On the upside, a more public profile meant that an increasingly large audience heard and processed the missives of a Christian leader thriving in the Jewish state. Moreover, hundreds of young Christians heeded the call to enlist in the IDF and are reaping the benefits of integration into the Israeli society.Yet the results came at a price. As soon as the Christian priest’s voice rang out in truth and unity, Muslim community leaders and Arab members of parliament responded with an equally passionate campaign of harassment and hate.Both Naddaf as well as the young Christian soldiers were threatened, reviled and humiliated – on social media, in Arab news outlets, within their communities and often by their own neighbors and families.Despite the calls for his execution – one allegedly offering a whopping reward of $300,000 – death threats and excommunication attempts by some of his colleagues in the church, Naddaf remains steadfast, thanking his backers, such as Pastor John Hagee and Christians United for Israel.“I am not afraid,” he assures. “I am doing what God called me to do. I am speaking the truth, found in the Bible. And He is with me. So why will I be afraid?”So what legacy does Father Gabriel Naddaf want to leave for his children? How would the Christian priest from Nazareth want to be remembered?Naddaf ponders the question from a long moment, then grins joyously.“I am not the important one here. They can forget me. But I want them to remember to live in the truth without fear. What I want for my children and their children is that they will love God – and love the land of Israel.”sign up to our newsletter