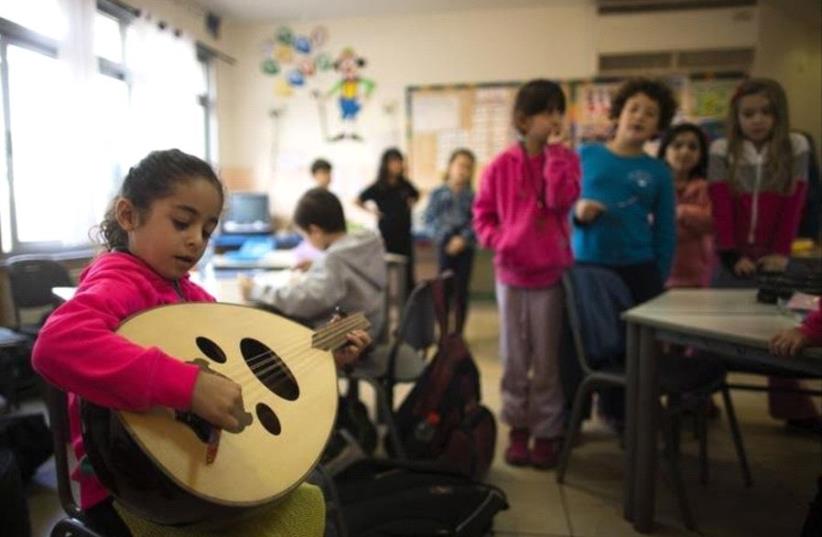 Mirvat, a second grade school girl, practices her oud at the Hand in Hand Arab Jewish bilingual school in Jerusalem.
(photo credit: RONEN ZVULUN / REUTERS)
Advertisement
Apartheid is nowhere to be found in Israel, FrontPage Magazine columnist Joseph Puder wrote in a piece on his experiences in the Holy Land. Puder, who has been writing for the conservative think tank David Horowitz Freedom Center for more than a decade, penned Wednesday’s column “In desperate search for ‘apartheid’ in Israel,” reporting on what life is like in the country.“Spring is usually when the enemies of the Jewish state hold their hate fest known as ‘Israel Apartheid Week’ on college campuses across America,” he said. “Students for Justice in Palestine (SJP) and their allies perform various acts that allege discrimination committed by the Jewish state against Arabs. The irony is that these performers of alleged ‘Apartheid’ have not been to Israel, nor have they witnessed everyday life in Israel that this reporter has. Israel may not encompass human perfection, but it certainly exhibits freedom, opportunity and tolerance seen nowhere in this region of the Middle East and beyond.”Students for Justice in Palestine most recently made headlines in January when New York’s Fordham University, a Jesuit Catholic institution, banned the hate group from its campus. The university received a public statement of praise from the Evangelical organization Proclaiming Justice to the Nations, which said Fordham was properly educating “Christians about their Biblical responsibility to stand with their Jewish brethren about Israel.”Puder also saw how Muslim- and Christian-Arabs sit in Israel’s parliament, have senior positions in hospitals, educational institutions and the Supreme Court, and are able to enjoy life in the country’s restaurants, cafes and other recreational establishments. One example that stood out for the writer of the lack of any apartheid in Israel was the Rami Levi supermarket chain, which he saw employs people of all religions. “I came across Mona, a 30’ish Arab-Muslim woman from East Jerusalem, who comes here daily to work as a cashier,” he wrote. “Other cashiers included a young, black, Ethiopian Jewess, followed by an older Sephardi Jew with a skullcap, and another Arab woman with a white head scarf. Young supermarket workers sit outside the store on their break, smoking cigarettes. They are a mix of Arabs, along with Arabic-speaking Israeli Jews. They are indistinguishable in their green uniform store shirts, and appear to be a band of brothers, sharing stories and jokes in Arabic and Hebrew.”The supermarket, he said, is a reflection of the country’s diversity and harmony among its population, and an unlikely place for the detractors of Israel to want to see and acknowledge.“It seems that the SJP crowd cares not to see the truth about Israel’s diversity and democracy,” Puder wrote. “Moreover, given the security risks from Palestinian jihadi terrorists, and terrorists from the Islamic State, Hezbollah, and Hamas, Israel is an amazing experiment in democratic tolerance. In searching for ‘apartheid’ in Israel, I found a reality that even those who are hardened pro-Zionists might not realize. Israel is truly an open society, a model of tolerance and acceptance, in a region where hate, intolerance, and bloodletting is common.”The antisemitic tirade against Israel continues, however. Last week the Middle East Media Research Institute reported that the head of BDS South Africa, Farid Esack, said the Israeli “apartheid” was far worse than anything he had experienced in South Africa. “Life in apartheid South Africa was infinitely better than life under the [Israeli] occupation, or life for Arabs inside ‘Israel proper,’” he said and that “apartheid was a Sunday school picnic in comparison to life under Zionism.” sign up to our newsletter