‘The scope of poverty and social inequality is intolerable,’ founder and president of the IFCJ Rabbi Yechiel Ecksteinsays. 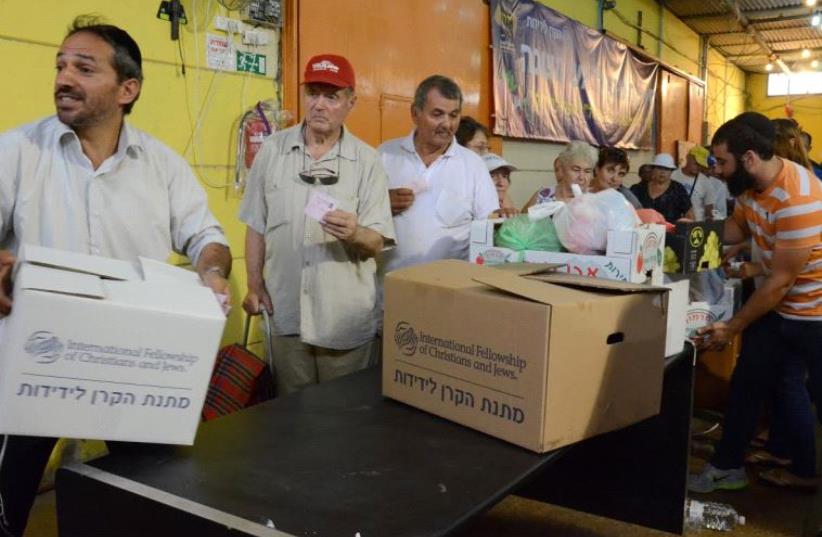 People receive IFCJ food packages prior to Rosh Hashana at the Yad B'Yad warehouse in Lod.
(photo credit: IFCJ)
Advertisement
The International Fellowship of Christians and Jews will give financial aid to more than 30,000 families and individuals for Rosh Hashana, the organization announced."Israel is steeped in a deep social crisis where the scope of poverty and social inequality is intolerable," Rabbi Yechiel Eckstein, founder and president of the IFCJ, said."During the holidays, the plight of those living in poverty becomes worse when tens of thousands of families do not know how they will sit down to the holiday table with dignity. On a daily basis, we receive dozens of inquiries from the disabled, the elderly and families in need because of the lack of proper social infrastructure in Israel. "The Fellowship’s New Year Assistance Campaign includes 8,500 needy families, single-parent families living in public housing and homeless people, who each received a NIS 400 voucher for food purchases at Shufersal, and 9,600 lone soldiers and soldiers-in-need, who received NIS 500 vouchers for purchases at chain stores. More than 5,000 families who regularly receive charity from local organizations, were given a holiday gift by The Fellowship – a gift certificate ranging from food baskets to a NIS 400 gift card, depending on their needs.  Some 7,700 children living in Israeli welfare institutions and 500 children living with their mothers in shelters for battered women each received a NIS 300 Dream Card voucher to purchase clothing at FOX apparel stores.All together, the IFCJ donated more than NIS 6 million.Earlier in the month, the Pantry Packers charitable organization, partnered with the IFCJ, said it saw a record number of volunteers who came to their Jerusalem warehouse to package goods for the holidays. In July and August, 4,480 volunteers visited the Talpiot warehouse, packing almost 70,000 kg. of food. All together, almost 140,000 individual bags of food are being distributed for Rosh Hashana.Pantry Packers invites volunteers, many of whom are tourists, to come to their packaging plant and be directly involved in the packaging process.“The goal of Pantry Packers is to give people an opportunity to give back by engaging in caring for others in a way that is both fun and educational and gives people of all ages a feeling of real accomplishment,” says Rabbi Traxler, founder and director of Pantry Packers. “This work becomes all the more important in the weeks ahead of Rosh Hashana where the demand for our holiday food packages intensifies considerably.”Pantry Packers is part of Colel Chabad, the longest continuously running charity in Israel. It was founded in 1788 by the founder of the Chabad movement, Rabbi Schneur Zalman of Liadi. To learn more about Jewish-Christian relations, check us out at @christian_jpost, on Facebook.com/jpostchristianworld/ and see the best of the Holy Land in The Jerusalem Post - Christian Edition monthly magazine.
Sign up for our Christian World newsletter >>