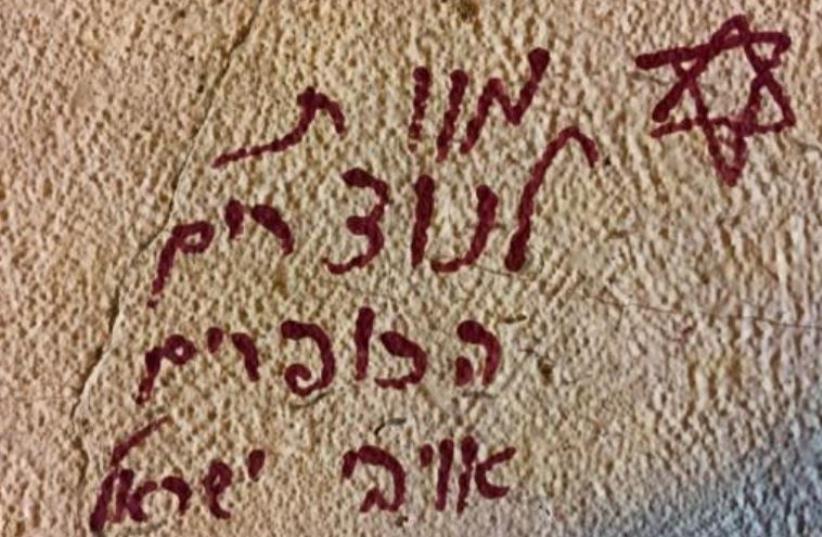 Grafitti at Dormition Abbey reads: Death to the heretic Christians, enemies of Israel
(photo credit: POLICE SPOKESPERSON'S UNIT)
Advertisement
In a show of support and solidarity, members of the Im Tirtzu Zionist movement visited the Dormition Abbey, which was defaced by alleged Jewish extremists. The suspects wrote hateful sayings on the monastery’s walls, including “Death to Christians enemies of Israel,” “The vengeance of the sons of Israel will come," “Death to Christians,” and other damage was caused to the property.The students arrived for a solidarity visit late Sunday night, strongly condemning the vandalism, saying this is not the way of Judaism and of the Zionist enterprise. The students also brought a letter of support.Matan Peleg, chairman of the Zionist movement, categorically condemned the attack on the Dormition Abbey.“[We] see this as an act that is at its very core both anti-Zionist as well as anti-Israeli, an act which dangerously threatens all of the Israeli society,” he said.Peleg said that if the act was done on the background of the dispute over the price of the building, then this is an even worse situation.“If this is the case, then this is a contemptible act like no other, turning a legitimate civil disagreement, which can be resolved in any available court into an artificial religious struggle, one that is full of hate and in which there are only losers,” he said.“We call upon the security forces not to let up until the perpetrators are apprehended. We strengthen the Christian Israelis serving in the Israel Defense Forces and in the civil-national service who were hurt by this event and promise to continue our fight against this phenomenon.”Father Gabriel Naddaf, chairman of the Israel Christian Recruitment Forum and the spiritual leader of the Aramaic-Christian community in Israel, praised Im Tirtzu. “This is an important step that shows those radical elements that the majority are disgusted by their actions and that another way is possible,” he said. “While others talk, Im Tirtzu shows that it acts towards true coexistence and out of a true and sincere concern for the relations between the Jews and the Christians and to strengthen the Israeli society.”sign up to our newsletter