Refugee tells churchgoers not to pray for the persecution to end. 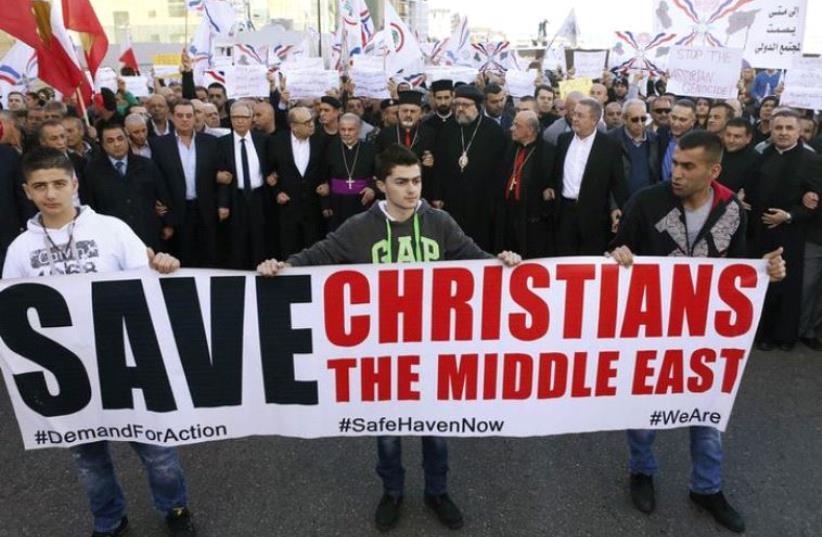 Assyrians march in solidarity with those abducted by Islamic State fighters in Syria, in Beirut, in 2015
(photo credit: REUTERS)
Advertisement
Despite Islamic State’s persecution of Christians, one Middle Eastern woman of the faith said that God’s plan in the region was “working perfectly.”A woman, going by the pseudonym of “Maryam” and only identified as a resident of the Middle East in order to protect her and her family, spoke to a group of churchgoers earlier this week, telling them to “pray a different prayer.”“Don’t pray for the persecution to be stopped,” she said, according to the Christian Post website. “But pray for the Christians there, for their boldness, their encouragement, for their faith and that they can all be witnesses for God’s work and for God.”She spoke at the MeadowBrook Baptist Church in Gadsden, Alabama, at the behest of a group of six pastors and ministry leaders. Maryam told the worshipers about the treatment of Christians in the Middle East even before the Syrian civil war and the rise of Islamic State.Muslim schoolteachers made her sit in the back of the classroom and made fun of her. Also, her father had a serious run-in with a pack of Muslim troublemakers, who tried to shut down his shop, threatening to kill him and pour acid on his daughter. “We are not afraid or worried that the persecution will increase. We are just feeling that this is God’s time,” Maryam said. “God is working perfectly now in the Middle East. Even with all these crazy stuff happening, God is really working now.”Also, the Middle Eastern Christian woman told the Alabaman churchgoers that the persecution of their fellow members of the faith only caused them to grow stronger, as she took out her Arabic Bible and read out the verse in Exodus 1:12: “But the more they were oppressed, the more they multiplied and the more they spread abroad.”Maryam plans to speak at eight more churches across the US in the next two weeks.In March, Secretary of State John Kerry announced that the United States had recognized that Islamic State had committed genocide against Christians, Yazidis and Shi’ites.While the genocide finding may make it easier for Washington to argue for greater action against the group, US officials said it does not create a US legal obligation to do more, and would not change US military strategy toward the terrorist group.Reuters contributed to this report.

To learn more about Christians in the Middle East, check us out at @christian_jpost, on Facebook.com/jpostchristianworld/ and see the best of the Holy Land in The Jerusalem Post - Christian Edition monthly magazine.sign up to our newsletter