Naddaf: As surviving Christian, I’m proud to be Israeli 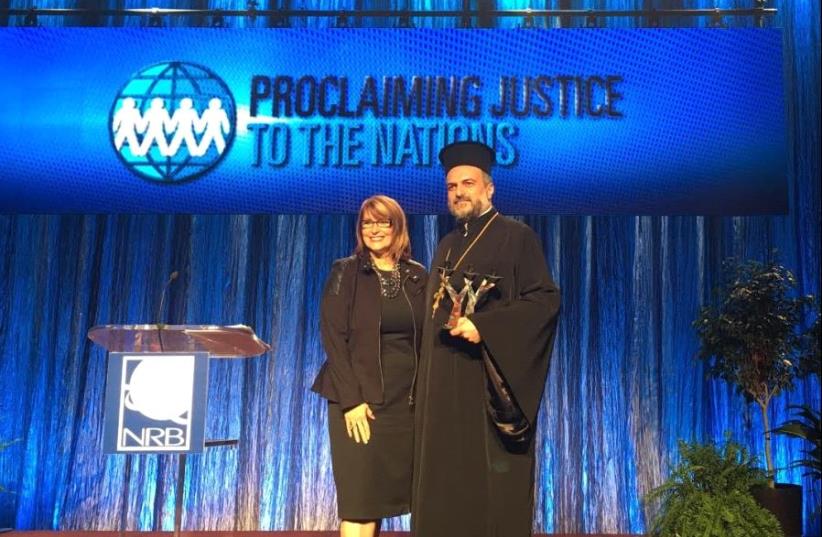 Laurie Cardoza-Moore, president of PJTN gives Father Naddaf the 'Ed McAteer Tree of Life Award'
(photo credit: PJTN)
Advertisement
Speaking at the annual Proclaiming Justice to the Nations’ gala dinner in Orlando, Florida, Father Gabriel Naddaf encouraged American Christians to stand with Israel against the BDS movement.Naddaf, the leader of the Christian Empowerment Council, which encourages Christian Israelis to enlist and integrate into the larger Israeli society, said at the dinner last week that “as one of the few surviving Christians in the Middle-East, I praise the Lord daily for the miracle of being able to call myself an Israeli.”“I praise God for allowing the Jewish people, the apple of His eye, to return to the Holy Land... as the prophet [Jeremiah] recalled ‘This is what the Lord says: “Restrain your voice from weeping and your eyes from tears, for your work will be rewarded,” declares the Lord. They will return from the land of the enemy.’”He told the capacity audience of hundreds of PJTN members in attendance that unlike what the anti-Israel boycott, divestment, sanctions movement is trying to spew, Israel is the only free and democratic country in the entire region.“As the blood of Christians runs like rivers across the Middle East, one country, one tiny country is the only state in which we are free to live and thrive as Christians – and that is the tiny, Jewish State of Israel,” he said.
Father Gabriel Nadaff-NRB 2017 from MP Films, Inc. on Vimeo.
The PJTN event took place at the National Religious Broadcasters (NRB) Convention, the largest annual assembly of Christian broadcasters and media, which attracts participants from around the world. At this year’s gathering PJTN showcased their latest documentary, “Boycott This!” which exposes the lies behind the BDS movement. Father Naddaf, who appears in the film, was invited by producers to educate viewers on the absurdity of those who seek to divest from Israeli businesses that hire Palestinians.Laurie Cardoza-Moore, president of PJTN, commended Naddaf for his lifetime of uncompromising commitment to the State of Israel by awarding him the distinguished “Ed McAteer Tree of Life Award.” The award is presented annually to a leader or organization that demonstrates an uncompromising commitment in support for the State of Israel. It is given in memory of the late Ed McAteer, an outstanding NRB leader for over 25 years.Cardoza-Moore told supporters that BDS groups on university campuses worldwide have often used violence to intimidate and harm Jewish and Christian-Zionist students and must be stopped with legislation, stating that “when these actions happen on our college campuses in direct contradiction with the civil rights act, we need to shut these groups down.” She condemned the rising tide of anti-Israel sentiment within the church.“As evangelical Christians we believe that if God said it, He meant it. But now many Evangelicals are buying into an anti-Israel narrative that is nowhere in the Bible... it is fake theology, like fake news and we must fight it.”To learn more about Jewish-Christian relations, check us out at @christian_jpost, on Facebook.com/jpostchristianworld/ and see the best of the Holy Land in The Jerusalem Post - Christian Edition monthly magazine. sign up to our newsletter