Francis compared the use of fake news to the Bible story of the devil, who, disguised as a serpent, persuaded Eve to eat the fruit of the forbidden tree. 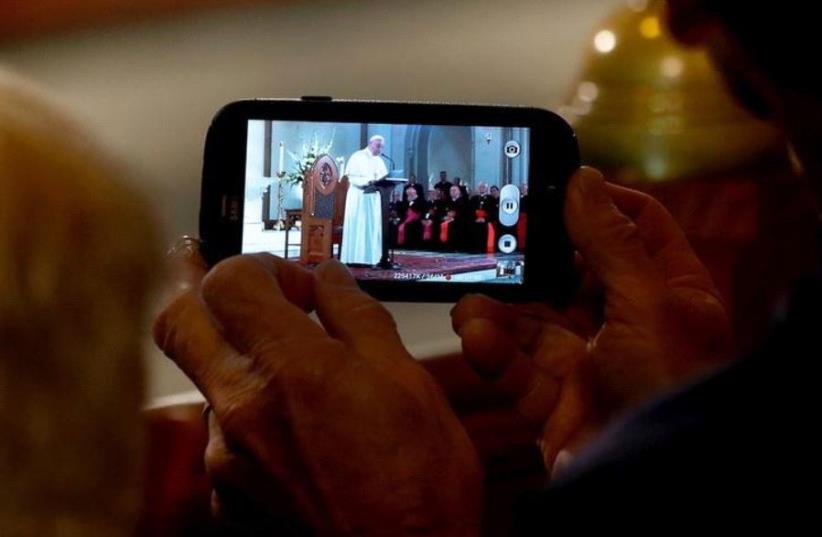 A member of the audience records Pope Francis as he speaks at St. Patrick's Catholic Church in Washington, September 24, 2015
(photo credit: REUTERS)
Advertisement
VATICAN CITY - Pope Francis on Wednesday condemned the "evil" of fake news, saying journalists and social media users should shun and unmask manipulative "snake tactics" that foment division to serve political and economic interests."Fake news is a sign of intolerant and hypersensitive attitudes, and leads only to the spread of arrogance and hatred. That is the end result of untruth," Francis said in the first document by a pope on the subject.It was issued after months of debate on how much fake news may have influenced the 2016 US presidential campaign and the election of President Donald Trump.The document, called "The truth will set you free - Fake news and journalism for peace," was issued in advance of the Catholic Church's World Day of Social Communications on May 13."Spreading fake news can serve to advance specific goals, influence political decisions, and serve economic interests," the pope writes, condemning the "manipulative use of social networks" and other forms of communication."This false but believable news is 'captious', inasmuch as it grasps people's attention by appealing to stereotypes and common social prejudices, and exploiting instantaneous emotions like anxiety, contempt, anger and frustration," he said.SATAN'S SERPENTFalse stories spread so quickly that even authoritative denials often could not contain the damage done and many people run the risk of becoming "unwilling accomplices in spreading biased and baseless ideas," he said.He called for "education for truth" that would help people discern, evaluate and understand news in order to recognize the "sly and dangerous form of seduction that worms its way into the heart with false and alluring arguments."Francis compared the use of fake news to the Bible story of the devil, who, disguised as a serpent, persuaded Eve to eat the fruit of the forbidden tree. He said she was fed wrong information by Satan."We need to unmask what could be called the 'snake-tactics' used by those (purveyors of fake news) who disguise themselves in order to strike at any time and place," he said.He said the role of journalists was "not just a job, it is a mission" and they had particular responsibility to stem fake news."Amid feeding frenzies and the mad rush for a scoop, they must remember that the heart of information is not the speed with which it is reported or its audience impact, but persons," he said. He said journalism should be "less concentrated on breaking news than on exploring the underlying causes of conflicts ... a journalism committed to pointing out alternatives to the escalation of shouting matches and verbal violence."
Sign up for our Christian World newsletter >>