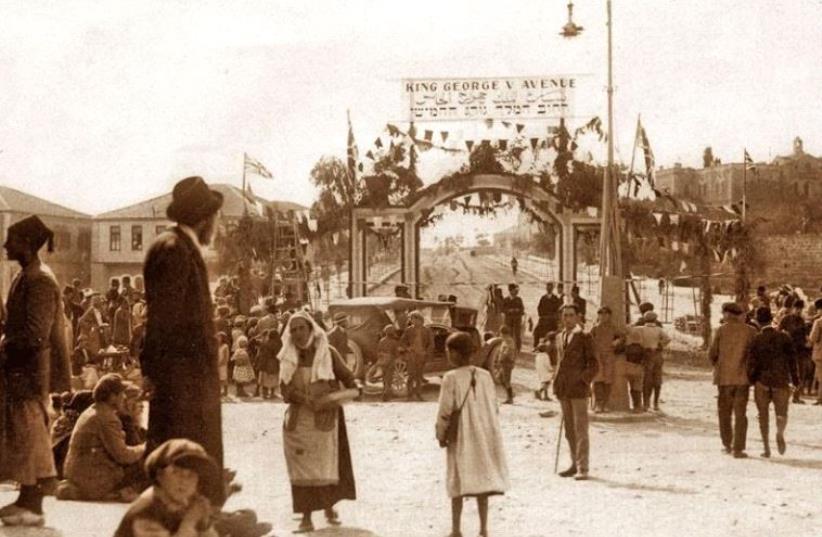 The inauguration of King George Avenue in Jerusalem, 1924
(photo credit: Wikimedia Commons)
Advertisement
Only three years after British Lord Balfour declared the desire to establish a Jewish national home in Palestine, the Treaty of Sèvres may have already been part of a legal process that made a de facto Jewish state in Palestine, administered by the British. Two years after the conclusion of World War I, the Allied Powers began partitioning the lands of the defeated Ottoman Empire.The treaty, based on the Sykes-Picot Agreement of 1917 and the San Remo Conference of 1920, gave the British Mandate over the territory classified as “Palestine.” The Treaty of Sèvres was signed August 10, 1920, but it was never ratified by Turkey. Not until after the Turkish War of Independence in 1922 did the Turks ratify the Treaty of Lausanne in 1923, which embodied several of the main agreements made at Sèvres.  According to Article 95 of the Treaty of Sèvres, the British were charged with seeing through the promise they made to the Jewish people pledging to grant them a “national home” in Palestine: “The Mandatory will be responsible for putting into effect the declaration originally made on November 2, 1917, by the British Government, and adopted by the other Allied Powers, in favour of the establishment in Palestine of a national home for the Jewish people.” What the establishment of a national home meant was still unclear, and while drastic improvements were made to the territory of Palestine, on the ground, the British ruled as colonialists, brewing a great deal of hostility with the native populations, with the United Kingdom establishing policies to severely restrict Jewish land purchase and immigration. In “The Legal Foundation and Borders of Israel Under International Law,” Jerusalem-based attorney Howard Grief wrote that at the moment the Treaty of Lausanne – based on the Treaty of Sevres – was ratified, a Jewish state came into existence.“Palestine was recognized as a state under the Treaty of Lausanne, and since Palestine was synonymous with the Jewish National Home under the Balfour Declaration and the Mandate for Palestine... then logically Palestine was already a Jewish state in the legal sense of the term during the whole period of the Mandate, under British administration even before that state became independent on May 15, 1948.” According to Grief’s legal theory, through the various conferences and treaties from San Remo to Sèvres and Lausanne, Israel has the right to keep all the lands it won in the Six Day War, and that the world can’t accuse it of being an “occupier” on those lands.“Thus the whole debate today that centers on the question of whether Israel must return 'occupied territories' to their alleged Arab owners in order to obtain peace is one of the greatest falsehoods of international law and diplomacy,” he wrote.To learn more about the building of the modern State of Israel as envisaged by the prophets of the Bible check us out at @christian_jpost, on Facebook.com/jpostchristianworld/ and see the best of the Holy Land in The Jerusalem Post - Christian Edition monthly magazinesign up to our newsletter