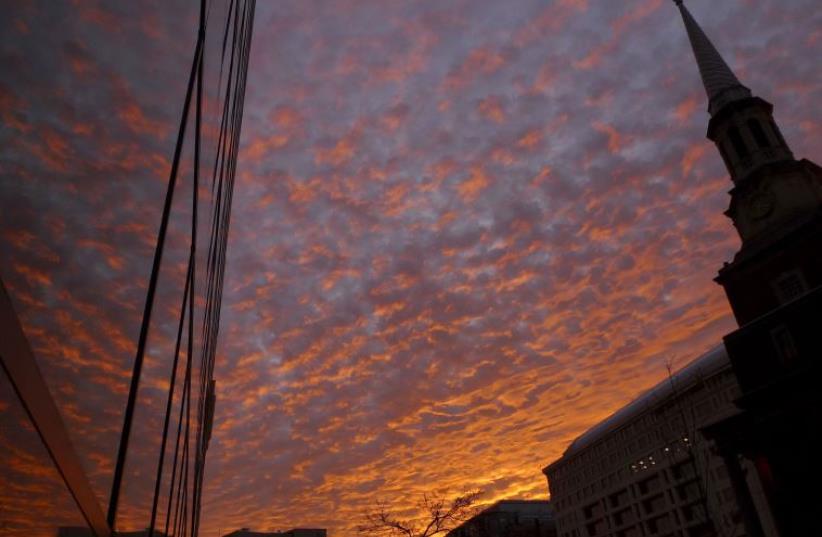 Early morning clouds are reflected in a window at sunrise across the New York Avenue Presbyterian Church steeple in Washington January 6, 2012.
(photo credit: REUTERS)
Advertisement
Pro-Israel group StandWithUs condemned the recent Presbyterian Church USA General Assembly’s biased tone, but lauded the improvements it took toward its treatment of the Jewish state. “We applaud the many Presbyterians of conscience who stood up to the anti-Israel extremists seeking to exploit their church for political gain,” said StandWithUs CEO Roz Rothstein at the conclusion of the event earlier this week.“Still, we remain deeply concerned by the institutional prejudice we witnessed during the committee hearings at the General Assembly. We hope that the PCUSA will take steps to rectify this problem, and fully restore its credibility as an agent of peacemaking and reconciliation between Israelis and Palestinians.” The non-profit organization said that improvements were made in policy, including recognizing that the Jewish state had the right “to exist as a sovereign nation.” This makes it the first mainline Protestant Church to explicitly recognize this right, due in large part to the efforts of Presbyterians for Middle East Peace (PFMEP) and other supporters of two states for two peoples. “[PFMEP is] a brave and principled group of Presbyterians who have been countering anti-Israel extremism within the PCUSA for many years,” StandWithUs said.The Church’s 222nd General Assembly, which took place in Portland, Oregon from June 18-25, 2016, featured five out of six overtures on the agenda of the PCUSA’s Middle East committee that encouraged pressure against or condemnation of Israel – the only nation in the region where the Christian population has actually grown over the last few decades.Palestinian leaders and terrorist organizations, such as Islamic State, were either completely absent from the debates or had criticism of them parried.Overture 08-06 blamed Israel for the lack of peace, avoided holding Palestinian leaders accountable for anything, and called for one sided pressure against Israelis.Also, during some points during the debate, racist remarks were made, including a voting delegate exclaiming that just because Jews are “the chosen people,” that doesn’t mean they should be able to “do whatever they want.” And anti-Israel activists played a video comparing Palestinians waiting in line at checkpoints to Jews being herded to their deaths in cattle cars during the Holocaust.
Sign up for our Christian World newsletter >>