"As long as Israel is here, I think we are safe in Europe," says Finnish participant. "We have to stand with Israel for our own good." 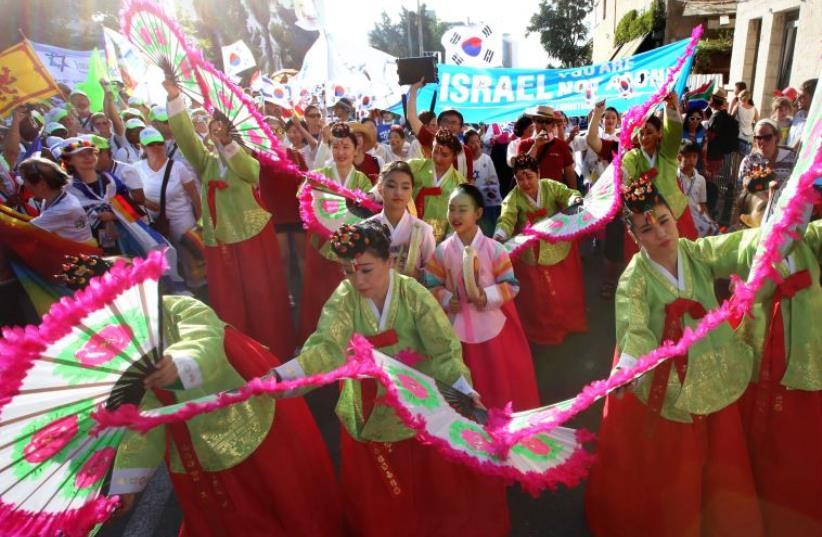 Feast of Tabernacles March in Jerusalem
(photo credit: MARC ISRAEL SELLEM/THE JERUSALEM POST)
Advertisement
Amid a carnival-like procession featuring live music, stilt-walkers, IDF soldiers and costumed dancers, tens of thousands of Christians from 80 countries enthusiastically converged in downtown Jerusalem on Thursday for the capital’s annual Feast of Tabernacles March.Organized by the International Christian Embassy Jerusalem - an Evangelical Christian Zionist organization - the celebratory pro-Israel gathering infused the city with a welcome joyful respite following weeks of Palestinian rioting.As several antique cars adorned with Israeli flags slowly cruised down Hillel Street, Sam Modise, a Baptist minister who traveled with 25 parishioners from Victoria, South Africa, said he made the trip to show support for Israel.“We came to celebrate and to forge strong links to the Jewish people here – to pray for Israel, to love the people, and take the lessons back home to share a positive story about this country,” he said, as a friend waved adjoined Israeli and South African flags.“I identify with Israel’s struggle as a nation for survival,” said Modise. “The visit to the Holocaust memorial here was very emotional for me because Jews have suffered so much. I have learned so much from this trip – more than I ever learned from reading history books or about Israel in the newspaper.”Johanna Manner, of Finland, said flying to Israel to celebrate at the march has become an annual tradition for her.“It’s a special time to be here,” she said in strongly accented English. “It’s pure joy to take part in the biblical feast, to share in the heritage, and it’s a special time to show support to Israel, also.”Asked her feelings about Europe’s growing international BDS movement, Manner described it as hypocritical and nonsensical.“I think that people [who participate in the boycott] just don’t know what they are doing,” she said. “It sort of contradicts everything that makes sense to me. Why boycott Israel if you don’t boycott Iran or Iraq or Turkey or Syria? I mean why boycott Israel of all countries? “I think that people just don’t know the facts,” she continued.“I think Israel is defending all of Europe here. In some ways, as long as Israel is here, I think we are safe in Europe. We have to stand with Israel for our own good.”Manner’s pro-Israel sentiments were appreciated by Esther and Stanley Landsman, modern-Orthodox Jews from Forrest Hills, Queens, who visited the country to celebrate the High Holy Days.“[Christians] came here to show solidarity with us, and we came to the march to encourage them. We hope that they continue helping Israel,” said Stanley. “It’s very important for the Jewish people to appreciate other people who are doing good things for us.”Esther agrees, saying that the Evangelical Christian community should be embraced and thanked for its unwavering support amid Israel’s increasing international isolation.“Israel and Jews need all the support we can get worldwide, and these are great supporters of the State of Israel,” she said.“We need more Jews to support Israel! So at least we have to be grateful when the Christians do it.”Jerusalem resident and Orthodox Rabbi Yitzhak Naki said he viewed the support in a biblical perspective.“I believe that this is one of the signs of the ‘end of days,’ when all the nations come to Jerusalem to celebrate Succot with us,” he said, as a nearby Evangelical group from Texas and South Carolina replied “amen” in unison.“God is God, not only for Jews,” Naki added, “God is God for everybody. Love God, love Torah, love Israel, love the land.”“Amen,” the Americans replied again.Meanwhile, although Teddy Schlichter – a 25-year-old Israeli, who attended the march with his spouse and infant son – conceded that he does not necessarily relate to Evangelical Christians, he said he nonetheless welcomes their support with open arms.“We know what the world thinks about Israel, so it’s good for us to know that other people like Israel and see the truth of what happens here, and not what the other countries say,” he said.For Berit Thoresen, an octogenarian who traveled from Norway to attend the march, visiting Israel is like “coming home.”“From my heart, I just feel like a bird coming back home,” she said with gentle, wide-eyed smile. “As a Christian Zionist, it is in my heart that I belong here. I can’t explain it, but it’s like a bird coming home.”Nearby, Melissa and James Patton of Kansas City, Missouri, took in the parade while casually sipping ice coffee at a Hillel Street café.“We love Israel, we love the Jewish people, and our desire is to be a blessing here,” said Melissa, noting it is the couple’s first trip here.“We’re serving the poor and some other helpful things, so we feel just very honored to be here because in our faith salvation is of the Jews, and we just wanted to honor the Lord by coming and serving his people.”Melissa continued: “And we’re here to pray for the protection of Israel, and that she stays the sovereign nation that she is.”Freddy Lasry, who made aliya from Morocco at the age of three, said he was deeply heartened by the collective international outpouring of love and support toward Israel.“I think it’s very nice to see that people love Israel,” he said. “I know that people love Israel all over the world, but now it’s not so popular to show it publicly.”Asked if hearing foreigners speak affectionately about the country has become an unusual experience, Lasry nodded forlornly.“I’m very sorry, but it has become unusual,” he said, as thousands of Christians loudly cheered marching IDF soldiers while waving their countries’ flags.“So when it happens it makes us very, very happy.”
sign up to our newsletter