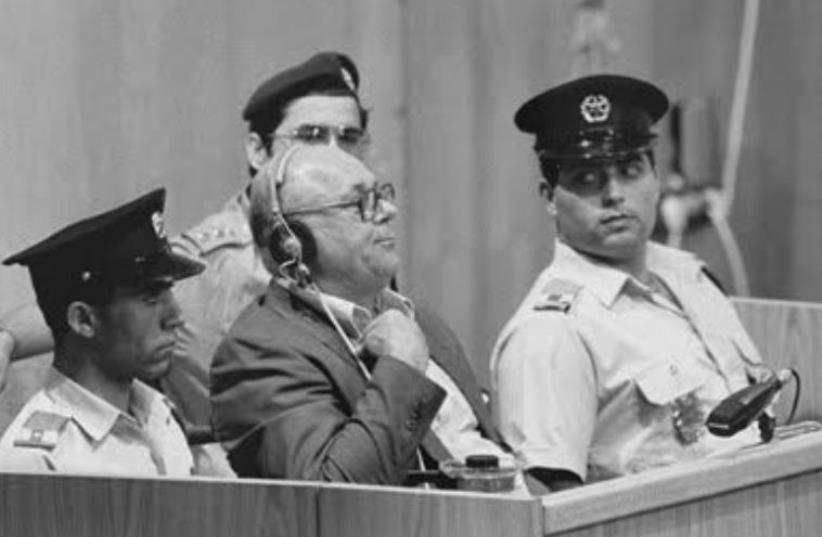 John Demjanjuk hearing his death sentence in Jerusalem
(photo credit: Wikimedia Commons)
Advertisement
On February 16, 1987, the trial of Nazi guard John Ivan Demjanjuk began in Jerusalem. Ukrainian-born Demjanjuk served in the Soviet army, where he was captured by the Germans in Crimea as a prisoner of war. Demjanjuk was sent to the Trawniki concentration camp, there he volunteered to be under Nazi command in applying Hitler’s “Final Solution” to exterminate all the Jews. After the war, Demjanjuk and his family moved to Indiana and then later Cleveland, where he worked as a diesel mechanic. In 1975, the US Immigration Service received a list of ethnic Ukrainians suspected of collaborating with the Nazis, and Demjanjuk’s name was there as well. Eight years later, Israel requested to extradite Demjanjuk, and after a lengthy appeal he was finally deported to Israel in 1986. The prosecutors main piece of evidence was a Nazi identity card bearing Demjanjuk’s name and his photograph, which even showed that he had the same scar more than four decades later. Eleven Holocaust survivors identified Demjanjuk – calling him by his pseudonym “Ivan the Terrible,” and accusing him of collaborating in the deaths of thousands of Jews in the Treblinka death camp.The defense rebutted that the identity card was a forgery and that the photo had been lifted from another document. The survivors’ testimonies could also not hold water, as they were drawing from memories and events that took place 40 years prior. Demjanjuk was convicted nonetheless in 1988, but on appeal the Supreme Court overturned the ruling in 1993 in light of reasonable doubt and new evidence proving that he was not Ivan the Terrible. He returned to the States, but was charged again, this time on charges that he was a guard in the Majdanek and Sobibor death camps. Germany took in the state-less Demjanjuk, where he stood trial being charged with 27,900 counts of acting as an accessory to murder to all those killed in Sobibor. After being convicted, Demjanjuk died in March 2012 at the age of 91 before his appeal could be heard.

To learn more about Jewish-Christian relations, the building of the modern State of Israel, as well as the Jewish roots of Jesus, check us out at @christian_jpost, on Facebook.com/jpostchristianworld/ and see the best of the Holy Land in The Jerusalem Post - Christian Edition monthly magazine.sign up to our newsletter