Famed meeting between Mahral and Emperor Rudolf is said to have been about kabbala. 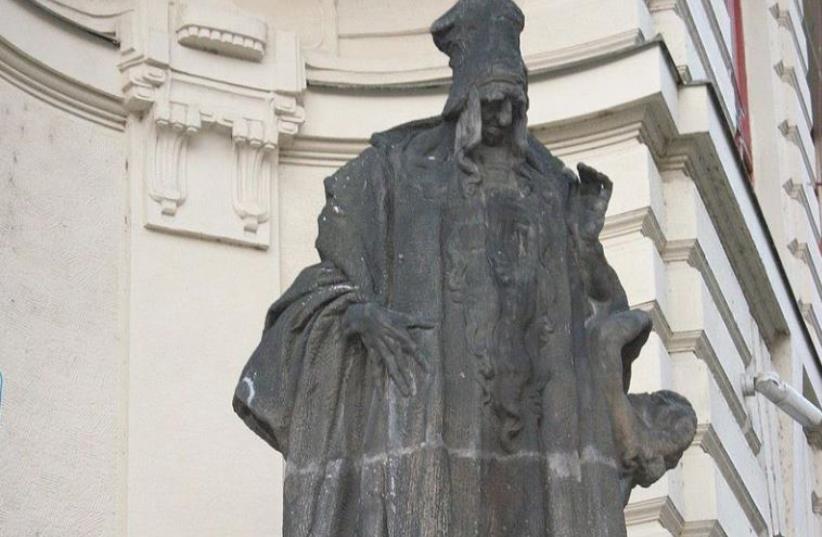 Ladislav Šaloun's statue of Loew at the New City Hall of Prague in the Czech Republic.
(photo credit: Wikimedia Commons)
Advertisement
On February 23, 1592, it was reported that the great rabbi of Prague, Rabbi Judah Loew ben Bezalel, known as the Maharal, met with Holy Roman Emperor Rudolf II in a meeting that was said to have been about Jewish mysticism and the study of Kabbala.The Mahrahal, an acronym of Moreinu HaRav Loew (Our Teacher, Rabbi Loew), was born in Poland in the early 16th century. Early in life he excelled in his studies, and until this day is considered one of the great thinkers of Jewish philosophy and Jewish mysticism, as well as in mathematics and astronomy and other sciences, and also providing a valuable commentary on the Bible. After being appointed rabbi of Prague in 1572, Emperor Rudolf II, who was king of Hungary and Croatia, king of Bohemia and archduke of Austria, began to hear about this great figure who was now a subject in territory. The emperor started to respect the leading Jewish figure of the time – which was greatly enhanced considering the king’s love for the occult sciences, a main domain of the Maharal’s study.Under Rudolf’s rule, the Bohemian capital became one of the Continent’s leading centers for arts and sciences, yet the king and the people stayed true to their religious principles. Daniel Jutte, in his work “The Age of Secrecy: Jews, Christians and the Economy of Secrets,” writes that in the eyes of the Maharal, science was acceptable and welcome as long it did not question the foundations of holy scripture. As such, the two leading religious figures of Eastern Europe at the time – Christian and Jewish – may not have believed in the same fundamental religious principles, but they did to believe that God was the true Creator of everything on Earth, which included the many scientific theories that were at times plainly dismissed in the name of religion by others. In the famed nocturnal meeting on February 23, 1592, it is said that the emperor, the Maharal, his brother, Sinai, his brother-in-law Isaac Cohen and another prince spoke about kabbala and Jewish mysticism for an hour and half. In “a Hebrew Chronicle from Prague, c. 1615,” the author writes that “in his benevolence, our master, the renowned luminary Emperor Rudolf may he be exalted, sent for our teacher R. Loew b. Bezalel, greeting him graciously, and speaking with him ‘face to face as one man speaks to another. (Exodus 33:11)’”

To learn more about Jewish-Christian relations check us out at @christian_jpost, on Facebook.com/jpostchristianworld/ and see the best of the Holy Land in The Jerusalem Post - Christian Edition monthly magazine.sign up to our newsletter