Francis Salvador and the Jews of South Carolina championed independence. 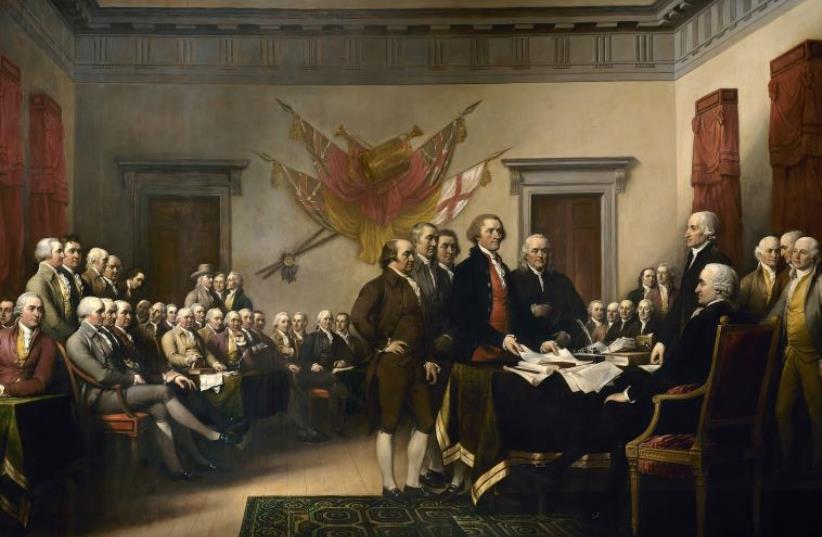 America's founding fathers sign the Declaration of Independence
(photo credit: Wikimedia Commons)
Advertisement
On this day 242 years ago, January 11, 1774, Francis Salvador became the first Jew to be elected to public office in the American colonies when chosen for South Carolina’s Provincial Congress.In 1669, the 1st Earl of Shaftesbury and his secretary John Locke drew up the charter of the Carolina Colony (which compromised North and South Carolina and parts of other adjacent states), granting liberty of conscience to all settlers. Ready and willing to help the nation that was being built on biblical principles and to help found the country that would be one of the first to recognize rights and freedoms for everyone, Sephardic Jews from London began settling the colony in the early 17th century. By the 1800s, South Carolina had the largest Jewish population of any of the United States.Francis Salvador, an affluent Sephardic-Jewish businessman, bought land in Carolina in 1773. Upon settling the frontier in the New World, he quickly took up the cause of independence, which was deeply rooted in Judeo-Christian values and connected to the biblical story of the Israelites’ struggle against Pharaoh and the Egyptians.At the time, Jews could not legally hold office nor vote. Salvador, nonetheless, was elected to the Provincial Congress and served his constituents until his death on August 1, 1776. Salvador, along with all other Jews in South Carolina, championed independence, dealing with both the logistic and military side of the pending War of Independence, as well as the judicial and legislative side of becoming a free and independent country. In July 1776, the British sent Indian tribes to raid frontier land in the colonies. Salvador and Major Andrew Williamson raised the alarm, and the militia was able to successfully parry the attacks. Weeks later, however, the militia fell into a British and Indian ambush. In the dark of the night, Salvador was shot, and before he could be taken care of, members of the Cherokee tribe discovered him, scalping and killing him, thus becoming the first Jewish soldier to die in the American Revolution. By the mid-1800s, South Carolina began to fade as the country’s hub for Jewish immigrants in favor of New York, but the Jewish contributions to the state and to America’s independence were of critical importance to the development of the country.
To learn more about Jewish-Christian relations, check us out on Twitter at @christian_jpost, on Facebook, and in our monthly Christian magazine, The Jerusalem Post - Christian Edition.
sign up to our newsletter