Amid tensions in the North, Gantz visits artillery units on Golan Heights

Chief of staff says he hopes situation in the North stays quiet, inspects an exercise held by paratroopers.

IDF Chief of Staff Lt.-Gen. Benny Gantz visited Artillery Corps units stationed on the Golan Heights on Friday morning, and received a briefing by commanders on the state of readiness of the military forces on the northern border. Gantz then spoke to military gunners and passed on special operational instructions to the units tasked with monitoring developments in the area.The chief of staff was joined by the Northern Command chief Maj.-Gen. Yair Golan and Brig.-Gen. Itzik Turgeman, the commander of the 36th Armored Division, which is based in the North. 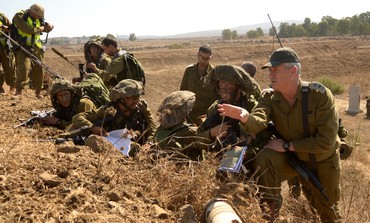 He also inspected an exercise held by paratroopers on the Golan Heights. Addressing the expected US strike on Syria, Gantz said he hoped the situation would remain quiet, but that if it didn't, "We must be determined and professional."EDIT 11:15 p.m.: A previous version of this story erroneously stated Gantz visited an Iron Dome battery.
Advertisement
Subscribe for our daily newsletter