Analysis: Propaganda battle over Ukrainian Jews is not over

Russia, Ukraine accuse each other of playing 'Jewish card' in conflict. 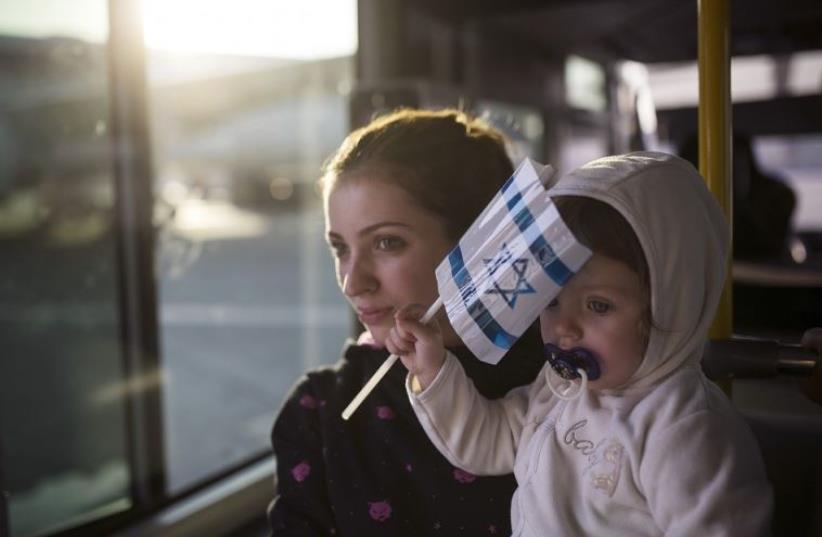 A Jewish immigrant from Ukraine holds her daughter aboard a bus, after arriving at Ben Gurion International Airport near Tel Aviv
(photo credit: REUTERS)
Advertisement
The use of anti-Semitism in propaganda has been a significant leitmotif in the ongoing conflict between Ukraine and Kremlin-backed separatists in eastern Ukraine, and recent reports out of Crimea seem to indicate that this trend is in no danger of petering out.Speaking to The Jerusalem Post on Thursday, representatives of the Crimean Jewish community said that they were unaware of media reports that a local man had been convicted of spreading Judeophobic propaganda last week, only days after Ukraine’s president accused Russia of fomenting anti-Semitism in the occupied territory.Speaking before the Knesset during a state visit here last week, President Petro Poroshenko said Jews living in the Ukrainian territory, which Russia occupied and annexed early in 2014, may find themselves in danger “as the conquerors have started to cultivate the anti-Semitism issue as well.”The Jewish community there, which is largely pro-Russian, immediately issued a scathing statement accusing Poroshenko of a “clumsy and hopeless attempt to distort the true picture of the existing interethnic peace and harmony in the Russian Crimea.”Likewise, a spokesman for Russian Chief Rabbi Berel Lazar accused Poroshenko of “using the Jewish card,” a charge identical to that made repeatedly by Ukrainian Jewish leaders against the Russians over the past two years.In justifying its takeover of Crimea, Russia has branded Ukraine’s new authorities as fascists backed by anti-Jewish gunmen.During a press conference in March 2014, Russian President Vladimir Putin warned against the “rampage of reactionary forces, nationalist and anti-Semitic forces going on in certain parts of Ukraine, including Kiev.”Several months later, Putin’s Foreign Minister Sergei Lavrov continued the diplomatic offensive, stating that “it could never occur to anybody that radicals and neo-Nazis could come to dominate Ukrainian politics.”In January, a ministry spokesman tweeted that a march by the neo-Nazi Svoboda Party in Kiev, which is the post revolutionary political landscape lost almost all of its parliamentary seats, “demonstrate[d] that [Ukraine] is continuing to move along the path of the Nazis.”Such statements became commonplace in the Russian media, with stories about nonexistent pogroms and accusations of Ukrainian politicians’ secret Jewish backgrounds making the rounds on television, print and Internet outlets.According to the latest reports out of Crimea, on December 26 a court in the city of Kerch convicted Igor Dukhanina for distributing anti-Semitic flyers in late 2014, sentencing him to two-and-ahalf years in prison but immediately reducing his punishment and banning him from media work, teaching and organizing events for the same period.Speaking with the Post from Crimea on Thursday, Elena Raygorodskaya, spokeswoman for the All-Crimean Jewish Congress and the editor of a local Jewish newspaper, stated that she and other community representatives were unaware of the conviction.She said that she had spoken to Boris Vinarsky of the Kerch Jewish community, as well as to leaders of the All-Crimean Jewish Congress and that none of them was aware of any such incident or conviction.This raises the possibility that the publication of such a story only days after Poroshenko’s remarks was meant as a rebuttal to Ukraine, in essence stating “look, we combat anti-Semitism, not promote it!” If true, this would not be the first time that Crimean Jewry became a subject of propaganda in the ongoing conflict.Speaking with this correspondent earlier this year, Misha Kapustin – a Reform rabbi from the peninsula who left with his family because he refused to live under Russian authority – said that he had been floored when Russia Today, a station believed to be closely aligned with the Kremlin, completely twisted his words to make it appear that he was fleeing because of anti-Semitism.“I did not expect anything to be done like that, they just misused my words, they just mislead my words, they just perverted my words,” he said.“In fact it was me, my voice, my words, it was me all the time there, and I must admit they did it professionally, they professionally changed the context so nicely, they do it so professionally.”