"The Ponary massacre" took place between 1941 and 1944 near the railway station at Ponary (now Paneriai), About 100,000 Jews, Poles and Russians, were murdered. 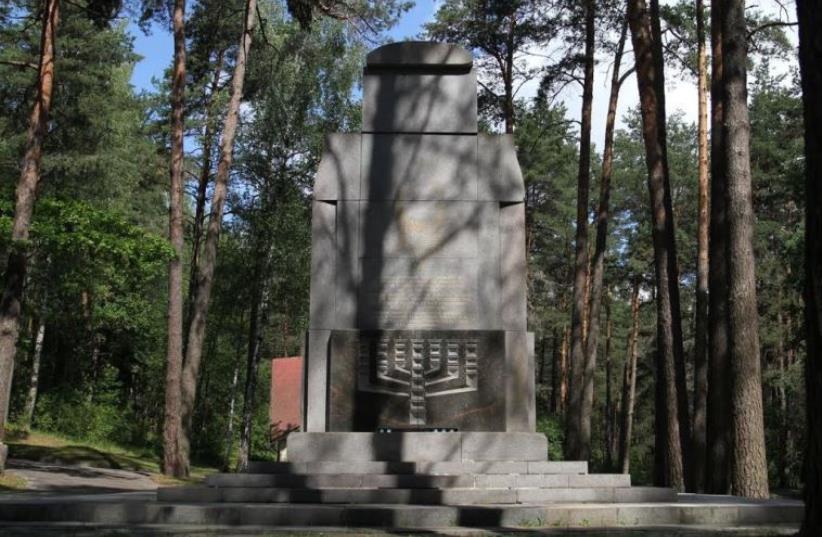 Lithuania’s major Holocaust memorial at Ponary, where the mass murder of up to 100,000 people took place, was smeared with antisemitic graffiti on April 1 and April 3, the Simon Wiesenthal Center said on Thursday. The graffiti ostensibly expressed support for the Russian military campaign in Ukraine and is cause for grave concern, it said.

Linking the local Jewish community with the Russian invasion of Ukraine is a completely false and very dangerous accusation that can only inspire the spread of antisemitism and encourage attacks on Jews and Jewish institutions, said Dr. Efraim Zuroff, the center’s director for Eastern European affairs and a Holocaust historian.

“These incidents are reminiscent of the false accusations of Judeo-Bolshevism, which fueled the collaboration of tens of thousands of local Nazi collaborators in Eastern Europe during World War II and their active participation in the mass murder of hundreds of thousands of Jews,” he said. “We urge the local authorities to apprehend and punish the perpetrators of these ugly incidents as quickly as possible.”

There was a new attack on the Ponar memorial, the Lithuanian 15min news site reported on Monday, and the Lithuanian Jewish community appealed to the government. In both attacks, the letters “V” and “Z” had been inscribed on some of the memorials.

This is the second such attack, the first of which was recorded last Friday.

“The Lithuanian Jewish community is shocked by the repeated attacks on the holy site of the Ponar massacre and has appealed to the government,” the report said.

“To our knowledge, this is a new case, a second one since Friday,” Rūta Ribinskaitė, a representative of the Jewish community, was quoted as saying by the BNS news site. “Representatives of our community took part in getting the memorial back to normal, and all those terrible symbols were cleaned up.”

On Sunday evening, the Lithuanian Jewish community received a message on Facebook with photos of people walking in the memorial on the previous day who had drawn “V” and “Z” symbols, Ribinskaitė said.

The Ponary massacre took place between 1941 and 1944 near the railway station at Ponary (now Paneriai), a suburb of today’s Vilnius (Vilna). About 100,000 Jews, Poles and Russians were murdered by German SD and SS and their Lithuanian collaborators. Of those, about 70,000 were Jewish.