"So many people denying the Holocaust, I worry that people will question if it ever existed"

Holocaust survivor Georgine Nash from Canada was just seven years old when the Nazis invaded Hungary. She and her mother were forced into a Jewish ghetto and later into a house that they had to share with 38 others. One day, the Nazis marched all 38 of those housemates down to the Danube River and shot them, but Nash and her mother managed to hide until the Russians liberated Budapest in 1944. After the Hungarian Revolution in 1957, she moved to Toronto, where she’s raised a family of her own. “I am now dedicating my energies to educate people about the Holocaust,” she wrote to Dattu’s daughter, “in order for them to make sure such horrors will not happen anymore.”

Holocaust survivor Eva Perlman from Los Angeles was born in Berlin, Germany in 1932, but grew up in France. After Nazi Germany invaded France in 1940, Eva's family went to the French mountain village of Autrans. Eva and her siblings went to a residential Catholic school where the owners protected their identities. Yad Vashem later recognized the school's owners, Georgette and Joseph Menthonnex, as Righteous Among the Nations.

Georgine had been to seven March of the Living journeys and Eva had been to nine, until COVID-19 put a halt to the 32 years of marches that brought to Poland 300,000 participants from all corners of the globe for a life-changing educational journey.

March of the Living resumes its operation this year and on April 28th, Holocaust Remembrance Day, thousands will once again march from the gate of Auschwitz death camp to Birkenau, with only eight Holocaust survivors. Georgine and Eva won't participate as groups from America and Canada decided not to come this year due to the war in Ukraine and COVID.

"I am crestfallen. I really wanted to go for the 10th time as this trip is so important to me and I am hoping, really hoping, that I get to go one more time in the future," said Eva.

Eva calls her experience at the marches "one of the highlights of her life." She recalls one moment that has stayed with her: The first time she went to Auschwitz and saw the map of the railroads throughout Europe leading to Auschwitz.

"I saw the name of the town, Lyon, close to where we were hidden during the Nazi occupation in France.  It reminded me of the days in hiding. If we had been discovered in hiding that would have been our fate. We were so lucky that we managed to remain protected in hiding."

Asked about the importance of the physical educational journeys to Poland rather than online virtual learning, Georgine replied: "It is not impossible to learn from a distance, but the intensity of actually being there, where all has happened can't be underestimated."

Eva thinks that while a virtual experience is not the same thing as standing in Auschwitz and seeing the roomful of hair and suitcases and glasses, we cannot discount the importance of providing some sort of teaching and learning virtually: "This is the world that we are living in and there is a need to adapt so that the message can be shared as vastly as possible and you need to use whatever medium is available." 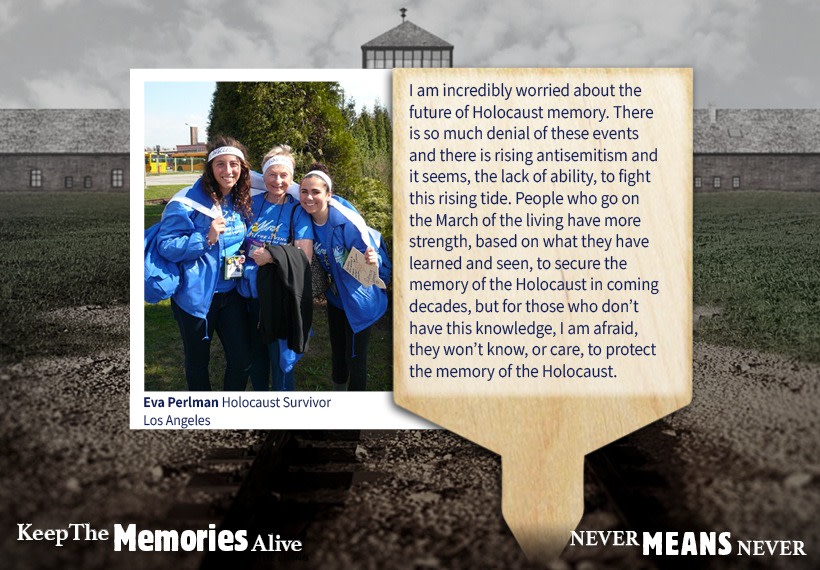 Photo credit - March of the Living

The 2022 March of the Living theme is "Passing the torch of memory from the survivors to the third generation" as more survivors are passing away. Georgine thinks that some grandchildren will be able to carry the torch, although their involvement won't be as deep as the survivor's: "I am very worried since there are so many people denying the Holocaust ever happened and without constant stories being told about it more people will question that it ever existed."

Eva says that she is not sure that the survivors can pass on the torch of memory: "I am afraid because if you ask young adults today about the events of the Holocaust, many of them have never heard the word 'Holocaust' and the tragic events that transpired.  March of the Living does help young adults understand the reality much more.  One dreams that one's work of telling the story is fruitful and has impact, but when you see what is happening in the world at large... it becomes more scary and less secure."

"I am incredibly worried about the future of memory.  There is so much denial of these events and there is rising antisemitism and it seems a lack of ability to fight this rising tide.  The students and people who go on the march have more strength, based on what they have learned and seen, to secure the memory of the Holocaust in coming decades, but for those who don’t have this knowledge, I am afraid - they won’t know or care to protect the memory of the Holocaust," Eva concluded.