Controversy over French intellectual’s visit sparks protest, government denials that they hosted him in the war-torn country. 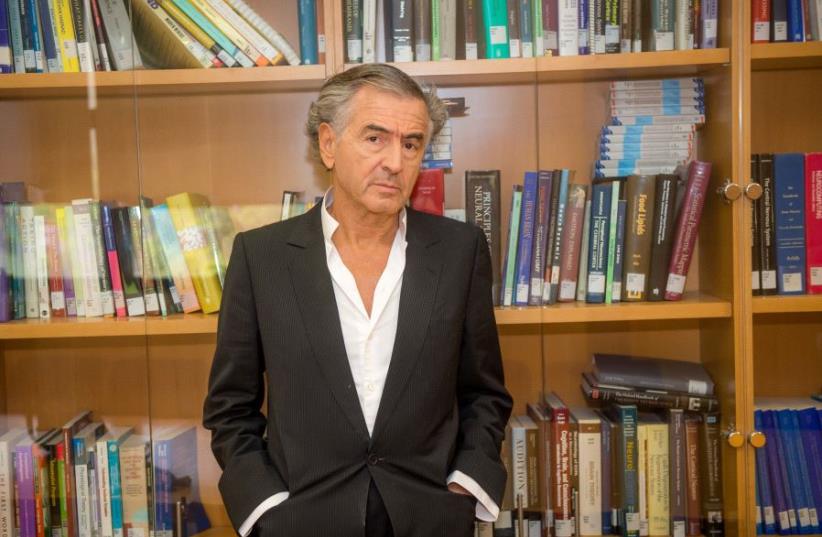 French Jewish philosopher Bernard-Henri Lévy
(photo credit: CHEN DAMARI)
Advertisement
A visit to Libya by French writer and intellectual Bernard-Henri Levy has led to controversy over who invited him and escorted him amid a civil war in the country. Protests erupted near Tarhuna, southeast of Tripoli, and one man shouted “Jewish dog” at the French writer’s convoy, according to a video posted online. Levy is Jewish.
Levy wrote on Twitter that he is doing a reporting trip to the “killing fields” of Libya. He posted a photo of what he said were Libyan police protecting a free press. In the photo, men with AK-47s and covered faces can be seen, apparently protecting him. “So different from the thugs who tried to block my convoy on my way back to Misrata.”

#Tarhuna. Just after my reportage on the killing fields. These are the true Libyan police who protect free press. So different from the thugs who tried to block my convoy on my way back to #Misrata. The full reportage will be published soon. pic.twitter.com/JYW1Aa5Y2V

Turkey’s pro-government Anadolu media appeared to highlight the “Jewish” aspect of the trip. He was called a “controversial French Jewish intellectual” in a headline on the pro-AK Party website, which is one of the main backers of Turkey’s militarist government.
Ankara’s ruling regime has been escalating the conflict in Libya in recent months, shipping Syrian mercenaries recruited from refugee camps to Libya and also sending drones and weapons to Tripoli. Libya is in the middle of a civil war between the Turkish-backed government in Tripoli and the Egyptian-backed forces in eastern Libya, called the Libyan National Army.
Turkish media slammed Bernard-Henri Levy for being Jewish. It noted that the interior minister of Tripoli had “denied reports of inviting [the] controversial French Jewish intellectual.”
The Government of National Accord appeared to say the journalist had come without an official government invitation and that the “public has the absolute right to react to any public event.” The Tripoli government might take harsh measures against any party involved in Levy’s visit, Anadolu reported.
The Tripoli government, known as the GNA, has powerful lobbyists linked with Turkey that work in Western capitals to drum up support. The way in which reports of Levy’s visit were tinged with antisemitism appears in contrast to the portrayal of the Tripoli government as the moderate “UN-backed government.” Critics of the GNA claim it is infiltrated by the Muslim Brotherhood, which is known for its antisemitism.
“The visit by the Jewish writer, who is known for his staunch support to Israel, has triggered uproar in Libya, amid calls for probing those who granted him a visa into the country,” Anadolu reported, adding that “Libya’s Ambassador to France Hamed al-Houderi denied issuing a visa for the Jewish writer.”
The use of the term “Jewish” in each instance describing Levy in this Turkish media report appears to be unique. When Anadolu reports about other French writers, it does not refer to them by their religion, such as noting if they are “Christian” or not.
MIDDLE EAST EYE also seemed to slam the visit, claiming that the “UN-recognized government [in Tripoli] has disavowed a visit by French writer Bernard-Henri Levi, a champion of the 2011 NATO intervention that helped topple the regime of Muammar Gaddafi and whose standing has plummeted since the uprising.”
This report claimed that he had once played a role advising French president Nicholas Sarkozy on the 2011 intervention. Middle East Eye said: “Levy flew into Libya’s government-held third city Misrata in a private jet on Saturday and told a pro-government television channel he was on assignment for The Wall Street Journal.”
Levy was mocked on social media for the visit. Emadeddin Badi noted that Levy wore his usual unbuttoned-at-the-top shirt and that his visit was a “PR fiasco” for the GNA. The Libyan Observer claimed that security forces in Tarhuna opened fire on Levy’s convoy. Others noted that he had come to see the “ruin he helped bring.”
Levy is often called by his initials BHL on social media. Some even geolocated where his convoy allegedly ran into troubles. “When you came to Libya did you have a Libyan visa?” one commentator asked. They also pointed out he did not wear a mask during the COVID-19 crisis.
Libyan National Army social media accused the GNA of a cover-up regarding who gave permission for the visit. BHL tweeted that on July 25, he was in Tarhuna, where mass graves have been found. According to the tweet, 47 bodies were found. “They suffered martyrdom from pro-Haftar forces. My sorry, my anger,” he tweeted.
LNA head Khalifa Haftar is backed by Egypt, the UAE, Russia, Saudi Arabia, Greece and allegedly France. The GNA has accused Haftar of war crimes, while pro-Haftar accounts accuse the GNA of being “terrorists.”
The French website Orient XXI wrote an article about BHL’s “failed return” on Sunday. It claimed he had landed in a private jet and left after a day when the visit was marred in controversy. The visit remains a mystery, the website said. It claimed the mayor of Misrata had not been informed about the trip and that the Presidential Council and the GNA claimed not to have given permission for it.

“The military actors in Misrata who were supposed to meet him declined,” the report said. The convoy he rode in was blocked while a man shouted “Jewish dog” at it. “If the objective of BHL’s visit was to restore the image of France in western Libya after [France’s] support for Haftar, it is a complete fiasco.”
ONE CONSEQUENCE of the visit may fall on Interior Minister Fathi Bachagha, who is known to have power and is from Misrata. The website Africa Intelligence accused him of buying a $2 million private plane on July 14. Bachagha has been trying to revive the country’s oil sector. The escorts for the convoy appeared to be part of Interior Ministry security, according to some online comments.
There may be more to the visit than meets the eye, some commentators noted. Social-media accounts linked to Al Jazeera attacked BHL on July 25 for being a “Jewish writer.” Libyan Member of Parliament Mohammed al-Abani reportedly called BHL a “Freemason.” This is a classic Muslim Brotherhood talking point used by Hamas and others that attacks Jews and Freemasons as being part of a conspiracy.
According to Samer Al-Atrush, Libyan High Council of State Chairman Khalid al-Mishri denounced the BHL visit because he saw it as linked to Bachagha. Atrush noted the “racist” aspect of hatred directed at Levy. Numerous social-media accounts slammed Bachagha and the Interior Ministry for allegedly providing the armed escort for BHL.
A search in Arabic on social media for “Jewish writer” reveals numerous stories about the trip. He is called the “fanatic Jewish writer” and linked to Israel. He is also accused of being the “Godfather of the Arab Spring” in another post. One social-media user from Egypt condemned the visit, also using the term “godfather of the revolutions,” which she claimed turned Arab countries to “ruins,” and then the term “Jewish writer.”
An Al Ain News article linked the visit to France’s role in Africa and asserted that because Turkey was not maneuvering in Niger, where France has forces, BHL went to Libya. What was not clear from the article’s apparent assertion was whether it was to stymie Turkey’s designs on Libya and Niger or to partner with them.
What is clear is that the visit revealed the antisemitic narratives that underpin media from Turkey to Qatar, which are also linked to populist attempts to push antisemitism in Libya. Some use the visit to discredit the GNA in Tripoli, while others within the GNA use it to stir up resentment against other parts of the GNA.