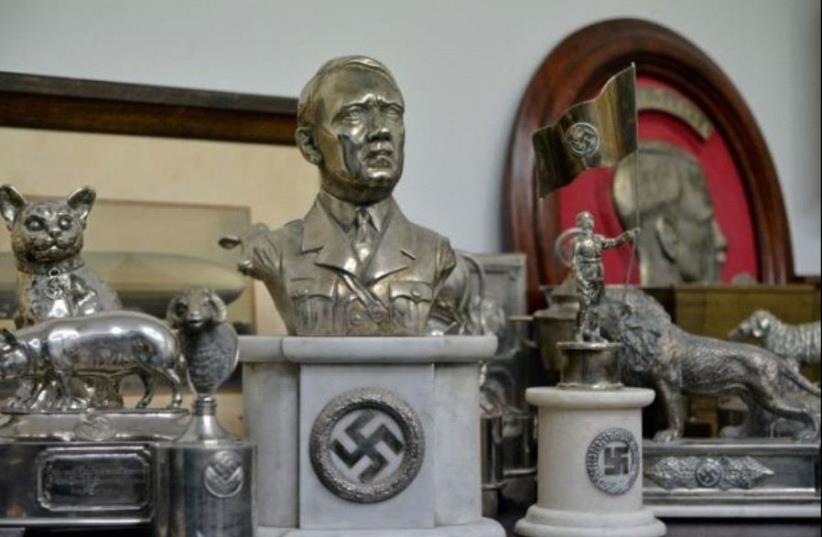 A bust of dictator Adolf Hitler, among other Nazi artifacts seized in the house of an art collector, is on display in Buenos Aires, in this undated handout released on June 20, 2017.
(photo credit: ARGENTINE MINISTRY OF SECURITY/HANDOUT VIA REUTERS)
Advertisement
Germany is still paying pensions to dozens of men who served in and collaborated with the Nazi SS forces and currently live in Belgium and the UK, European media reported on Wednesday.According to Deutsche Welle, the information was revealed when four Belgian parliamentarians submitted a proposal to halt the payments. The lawmakers called on the Belgian government to take up the issue with the German government, the newspaper reported. Deutsche Welle stated that around 30 Belgians who served in or worked with the Nazi SS forces receive between 435 and 1,275 euros a month from the German government.The EuroNews website, based in France, reported Wednesday that the Belgian lawmakers presented a document to the country’s parliament proving the payments. According to EuroNews, the proposal to halt the payments was approved unanimously in a vote in a parliamentary committee this week. The site said that those receiving money “are citizens who pledged loyalty and obedience to Hitler following Germany’s occupation of Belgium and signed up to serve in the SS” and that many of them “were subsequently found guilty of collaboration by Belgian courts.”The purported document stated that the pensions to these individuals “were the only decree implemented by Hitler that was not revoked at the Potsdam Conference of 1945,” according to EuroNews.The RTL TV station in Luxembourg revealed Tuesday that the Belgian government does not know the names of the 27 individuals who are still receiving pensions, but the Germany Embassy does, and, “consequently, the 27 individuals have never been taxed on this additional income.”Efraim Zuroff, the director of the Simon Wiesenthal Center’s Jerusalem office, told The Jerusalem Post Wednesday that the report was in no way surprising.“I’m not very shocked by this story because this is a story that’s actually much larger than this,” Zuroff said. “This is not just only those in [Belgium] and the UK, it relates to many countries.” Zuroff said he and the Wiesenthal Center worked with the German government for more than a decade to stop pension payments to Nazi war criminals – with limited success.“We were quite frankly very disappointed by the small number of people who had their pensions canceled,” he said. And he does not have high expectations for the Belgian Parliament’s success in taking the matter up with the German government.“I think they will be totally unreceptive,” he said.