A MONUMENT TO honor the victims of the Jasenovac camp.
(photo credit: ANTONIO BRONIC/ REUTERS)
Advertisement

Diplomatic tensions escalated between Serbia and Croatia on Sunday since Zagreb would not allow the Serbian president to visit a Holocaust memorial site in Jasenovac, which was once considered the “Croatian Auschwitz.”

Jasenovac was a concentration camp established in the then-Independent State of Croatia (NDH) in occupied Yugoslavia during World War II. The camp operated as part of the then-Ustase regime which was the only country that collaborated with the Nazis in operating their own concentration and death camps. The Jasenovac camp killed hundreds of thousands of Serbs, Jews and smaller ethnic groups such as Roma.

Serbia’s President Aleksandar Vucic asked to visit Croatia privately and pay tribute to his grandfather that was murdered at the Jasenovac camp. Yet, Croatian Foreign Minister Gordan Grlić-Radman responded to the reports in the media of this planned visit and said that “the president of a country is a protected person and such an arrival requires the involvement of the Croatian authorities,” according to local Croatian media.

Sources in Croatia’s Foreign Ministry also were quoted saying, “The fact that Croatia has not been officially notified about the visit is unacceptable.”

"He's not only coming as the President of Serbia, he’s coming as a grandson of a victim and this is a very sensitive issue because the largest group of victims in Jasenovac concentration camp was Serbs, not Jews.” 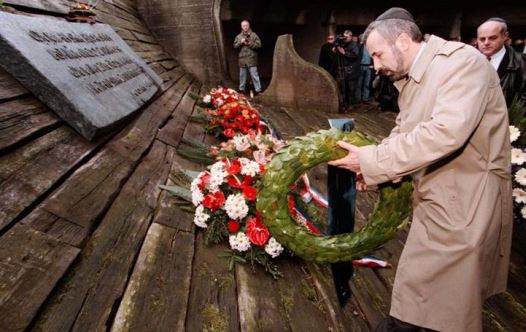 Ognjen Kraus, leader of Croatia's Jewish community, lays a wreath on the monument of Fascist victims, mostly Jews, Serbs and gypsies, during a commemoration held at the site of the former World War Two concentration camp in Jasenovac April 19, 1998 (credit: REUTERS)

According to reports, Vucic has canceled the visit and Serbia officials explained that the reason is “for the sake of good relations.”

In addition, Croatia officials said that they heard of this visit through “unofficial” sources and not through diplomatic channels as is usually the protocol. Gerlich Redman was also quoted saying that they see the media reports around the planned Vucic visit as a “provocation,” which, in his view, “do not honor the victims [of the Jasenovac camp].”

The Simon Wiesenthal Center weighs in

Yet, a few Jewish organizations have decided to support Vucic, including The Simon Wiesenthal Center. Efraim Zuroff, director of the Simon Wiesenthal Center office in Jerusalem, an American-Israeli historian and Nazi hunter, told The Jerusalem Post on Tuesday that “It’s important to note that Vucic’s grandfather and other relatives were killed by the Ustase,” Zuroff said of Ustase, a Croatian fascist organization, formally known as the Croatian Revolutionary Movement. According to historians, Ustase members murdered hundreds of thousands of Jews, Serbs and Roma during the Holocaust.

“So, in other words, he’s not only coming as the president of Serbia, he’s coming as a grandson of a victim and this is a very sensitive issue because the largest group of victims in Jasenovac concentration camp was Serbs, not Jews.” Zuroff explained that there were also “approximately 18,000 Jews and thousands of Roma who were killed, as well as Croatian antifascists – those were the four targets in this camp.”

ZUROFF FURTHER said that the Jasenovac concentration camp can be considered, in some ways, as a death camp, even though it hasn’t been treated as such historically. He added that “People normally talk about death camps only in Poland, but this camp [Jasenovac] had a gas chamber. Most of the people were not killed in the gas chamber, yet they were killed in the most horrible ways imaginable: They used to press on people’s skulls until their eyes popped out and used to cut pregnant women’s stomachs open in order to torture them. They even devised a dagger, which they called the ‘Serb killer,’ which supposedly made it more painful to the victim than usual.”

Zuroff thinks that anyone should be allowed to visit the Jasenovac concentration camp, even if they aren’t the Serbian president, but he actually sees great importance in having a Serbian leader from a family that was directly influenced by the horrors of the camp – visit the memorial site. “It’s important to let anyone visit [the camp] and it’s especially important that the president of Serbia has the permission to go there as the leader of the Serbian people, as well as the grandson of a victim,” Zuroff stated.

“On one level, you could say it’s a political issue, but it’s also a personal issue, a human rights issue,” Zuroff stressed.

Zuroff says that the Ustase organization was in some ways the “ISIS of that generation.”

Vucic’s side of the story was published on the official website of his political party, the Serbian Progressive Party. “The President stated that the information that he was banned from going to Jasenovac camp first appeared in the Croatian media, while there was no reaction from Serbia because our country wanted to send a note of silent protest to the Croatian ambassador,” a statement said. It continued with the explanation that “this happened because they thought that we would go public, even though we wanted to deal with this issue quietly.”

“It goes without saying that I am to blame,” the Serbian President is quoted remarking ironically and showing the people in the room with him the headlines in the Croatian media that reported on his interest to visit the memorial site and by this trying to cause chaos. “Imagine that chaos, maybe because my ribbon would be in the colors of the Serbian flag in accordance with the suffering people in Jasenovac, but to call it chaos and provocation was excessive and I was surprised,” Vucic said.

Zuroff concluded by saying to the Post that “Vucic has already asked to visit the Jasenovac death camp twice, before this specific diplomatic incident. There is no reason in this world to not allow him to visit the site where his family was brutally murdered.”